Media networks were at last able to name the winner of the 'Race to the White House' this morning after treading water for days. Meanwhile the sitting President gave them all a huge headache: how to handle the cascade of false claims made in the vacuum of uncertainty? 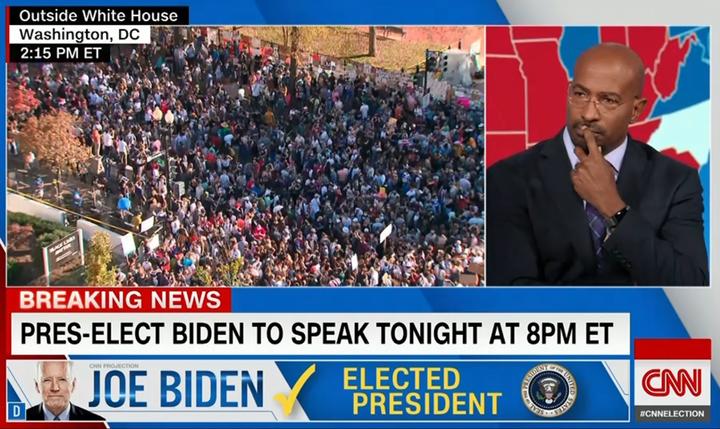 It’s not often you hear a host say their own branding for a big news event is wrong - but she wasn’t wrong about politically-divided America delivering an inconclusive result that night.

“We have run out of information,” CNN host Chris Cuomo told viewers sadly just before 6 am in Washington DC the following morning as they waited in vain for fresh voting results to be released in key states.

Soon after he pleaded for fresh numbers to analyse from the Secretary of State for Michigan Jocelyn Benson. She told him - politely but firmly - the media would only get fresh information when it was good and ready - and properly counted.

(Since then she’s been sued by the Trump campaign as part of its bid to challenge the state’s results). 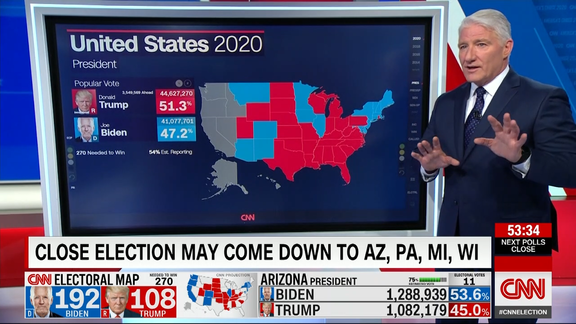 But while fresh numbers were in short supply as the official counts seized up, so was patience - something Donald Trump isn’t famous for.

Social media platforms had already hidden and tagged some of Donald Trump’s own tweets and posts claiming victory on the grounds they were false.

Knowing this was likely to happen, media executives had pondered in advance what to do about broadcasting false claims by Trump or his followers to millions watching and listening while the votes were being counted - and tensions were high.

US media executives - speaking on condition of anonymity - told CNN’s media correspondent Brian Stelter they would broadcast Trump live on the air under those circumstances. CNN’s Jake Tapper - a vocal Trump critic - said it would be “wrong to censor the candidates.” 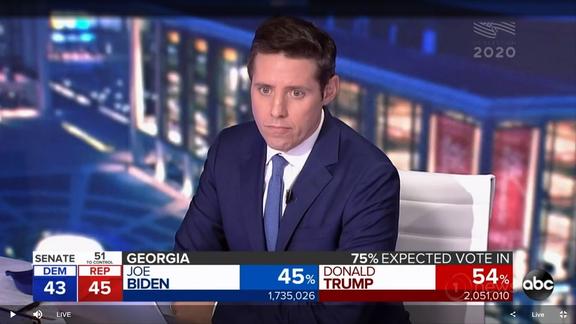 But they promised his statements would be - in the words of one editor - “aggressively fact-checked“.

Others told CNN’s Brian Stelter vigourous corrections would be made and strong "visual proof" the election was still in play would be aired too.

Here, Trump’s bogus victory claims did get knocked off air by TVNZ during its live coverage on Wednesday night.

In middle of a rambling Trump speech from the White House - described by CNN’s Jim Acosta as “reality challenged” - TVNZ crashed out of it and into a British real estate reality show Location, Location, Location.

In the New Zealand Herald critic Steve Braunias harshly said both major TV channels "looked like they operated on a budget of approximately $7.50."

But over on Three, the Newshub special’s flaws were editorial.

One - according to Steve Braunias - was Paul Henry as host. He was dismissive of the Democrats and an admirer of Trump’s energy and style.

He also spoke of  Trump’s “emotional honesty” with Jesse Mulligan on RNZ National the day before election day, while plugging his new book about his love of the US. 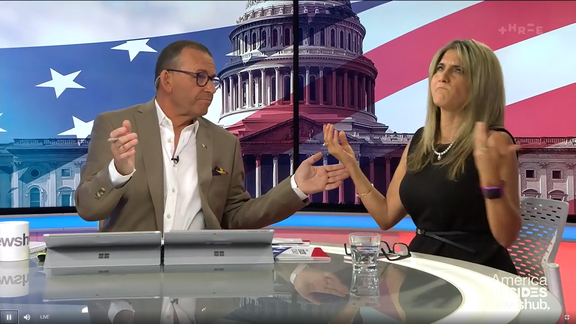 He was far from the only Trump admirer on Newshub’s special.

US ambassador Scott Brown - a Trump appointee beaming in from a US embassy party - was his master’s voice when he talked about “the virus we got from China”  and how we would have learn to live with it.

(As Steve Braunias said in the Herald, they’ve certainly succeeded under Trump in finding ways of dying from it in the US).

On RNZ’s Checkpoint special, Waikato University politics lecturer Dan Zirker was alarmed to hear Ambassador Brown say there had been no Republican efforts to suppress voter turnout while others echoed Donald Trump’s claims about possible fraud in postal ballots and the US Postal Service favouring the Democrats.

Later in the evening, Newshub called up Trump campaign adviser Steve Rogers in the US. When Newshub host Tom McCrae asked him about Republican efforts to suppress the vote, he responded with claims of huge fraud in mail-in ballots which went unchallenged.

Those claims of dumped and destroyed postal ballots - aired by many Republican supporters - have been scrutinised by many reporters and fact-checking service - and declared to be either fake news or electorally-insignificant instances in almost every case.

Soon after that in the Newshub’s studio, Newshub welcomed a Trump-supporting AUT law lecturer Amy Baker Benjamin - who also spoke of significant voter fraud. Voter fraud claims were also made by Jesse Jane Duffy from the Women for Trump group in an interview on RNZ’s Morning Report on Thursday.

The day after our election, American journalists shared online video of Newshub’s political editor refusing to allow Advance NZ Party leader Jami-Lee Ross to spread misinformation about Covid-19 death rates. They applauded her determination nor to give him a platform for it - even though he was a minor player - and said their networks could learn from that.

But while it's interesting to hear from people who support a candidate who attracted about 70 million votes from Americans this week, Newshub and others on the day allowed Trump backers to say untrue things they couldn’t prove about electoral integrity - mostly without challenge.

President Trump himself took it to a whole new level with his fact-free ramble on Friday afternoon (NZ time) claiming million of votes were illegal and and election he won had been “stolen.”

This time, several US networks pulled the plug while he spoke.

He continued to make the claims even as his ‘Path to 270’ crumbled - and networks one by one finally called Joe Biden President-Elect early on Sunday morning our time.

But by now few networks were airing the claims live.

The media will have to hold that line for a while yet. The claims, misinformation and law suits will keep coming from Team Trump as he remains in office until inauguration next January.

He's already said - reportedly - he will only leave the White House "kicking and screaming."