An anonymous artist is hiding somewhere in Stuff's social media team. Their works are usually no more than 50 words long. Their medium is the push notification. 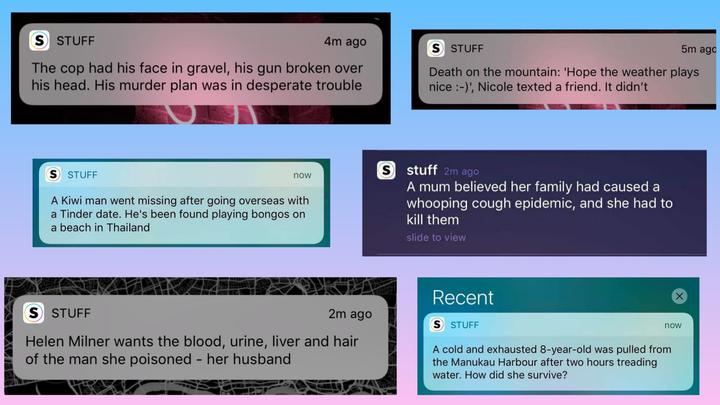 Anyone who’s downloaded a news app will know the downside of push notifications.

They’ll come in a deluge. Your phone will ping 10 times during the finale of The Block NZ. You’ll get four notifications on every try in an All Blacks' match.

Most people get frustrated, and quickly change their phone settings to stop the interruptions.

That may bring a measure of relief. But it comes at a cost. Push notifications, while annoying, are also the medium of choice for one of New Zealand’s most mysterious, evocative writers.

I first started noticing this writer’s work a few years ago, in the alerts for the Stuff.co.nz app.

Many of its notifications were written in an unadorned, straight news style.

But every so often my phone would pop up with something like this:

It was strange and slightly beguiling. Another read like this:

These were a kind of dark news poetry. Instead of just imparting information, they read like the back page blurb of a mystery novel.

It seemed to me these one-line provocations were the work of an anonymous artist of sorts.

I called Wellington author and book editor Ashleigh Young, who confirmed the notification writer’s output had literary worth.

She was impressed at the amount of drama and intrigue they were able to evoke in the space of 40 or so words.

One notification about a police officer whose murder plan was thwarted by some kind of physical altercation was particularly impressive, she said.

“It really ratchets up the drama and the horror. It builds an intensity, and uses that series of little revelations that lead to that final revelation that he has this murder plan, which is shocking and irresistible.

“I’m wildly impressed with these notifications on the whole.”

Young did strike a note of caution though. Sometimes the push notification writer could be a little too glib in their treatment of serious real-world events.

“They do remind me of some of the straplines you sometimes see on the covers of thrillers. They also remind me of some of the techniques that blurb writers employ on the backs of novels. But these are real people’s lives. As much as I can admire their literary approach, I also can feel a little uneasy about the way they’re colouring these terrible acts to make them intriguing.”

Despite that criticism, it’s worth noting that the writer doesn’t always deal with darkness and pain. Often their work contained elements of mirth and playfulness.

Stuff’s editor Patrick Crewdson was tight-lipped when contacted by Mediawatch about the identity of the organisation’s push notification writer.

“We'd prefer to let our push alerts speak for themselves,” his statement read.

I spoke to someone in the company’s social media team.

“Shit those are incredible,” he said. “I would happily tell you everything you need to know, but I don't know why we write those like that.”

Just like that person, the push notification writer’s identity will remain shrouded in secrecy.

But if the writer thought their work was going unnoticed, they were wrong.