The broadcasting watchdog this week upheld a complaint that comments about Covid-19 death rates by Newstalk ZB’s Mike Hosking were misleading - and highlighted “the importance of data literacy” in the media. It wasn't the only time the broadcaster had misread Covid-19 stats - and misled his listeners.

Sorry, not sorry: Mike Hosking in 2018 - hitting back at the broadcasting watchdog. Photo: screenshot

“We risk using a hammer to crush a flea,” Hosking warned in his 'Mike’s Minute' editorial on 6 April, which is no longer available on the ZB website or Facebook page after the complaint upheld this week by the Broadcasting Standards Authority.

He was echoing Auckland University epidemiologist Dr Simon Thornley, a member of Plan B group which believed the government containment measures were doing more harm than good.

Dr Thornley wrote those words in an opinion piece for Stuff on March 31st in which he also said deaths have been wrongly attributed to Covid-19 in Italy.

Overall, he reckoned, deaths there were much the same as during the flu season two years earlier, and he made the point again as a guest on the Mike Hosking Breakfast the following morning.

In his Mike's Minute on April 6, Hosking claimed almost everybody in Italy said to have died of Covid-19 had in fact died “with the virus” - but not “of it.”

But no-one was reporting this, Hosking complained.

“The coverage you are getting is - to an extent - false,” he told his listeners.

The BSA this week found Hosking conflated Covid-19 figures with the figure of 1600 deaths per day in Italy  - and ignored the possibility that Italians may have died a lot sooner than they might otherwise have.

The BSA noted that around the time of the broadcast on 6 April, “Italy was experiencing a 58 percent deviation from its expected death rate” according to an online source it considered credible.

Having looked into where Hosking got his online information, the BSA said NZME (Newstalk ZB’s owner) did not make reasonable efforts to ensure the programme was accurate - and back up what it called his “relatively strong views critiquing the government’s measures to manage the impact of Covid-19.”

NZME - rather than conceding that this was the case - contested the complaint, insisting that listeners know Mike’s Minute is based on his own opinion and analysis.

But the BSA said audiences “rely heavily on mainstream media to provide authoritative, reliable information on matters of public importance".

Upholding this accuracy complaint “does not unreasonably prevent Mr Hosking from expressing his views,” said the Authority.

“It reasonably requires Mr Hosking to express his views in a way that does not propagate a selective or misleading interpretation of the factual sources relied on, or omit important contextual information that may alter listeners’ understanding of the views presented on a topic of high public interest,” it added.

In other words, Hosking has carte blanche to air opinions based on stats about life and death stuff, but the broadcaster should at least try to make sure he’s not misleading the listeners when he does.

It was not the only time lately that Hosking has blurted out misleading numbers from overseas which he reckons cast doubt on the Covid containment strategy here.

Ten days later, on 16 April, he said the results of mass testing in Iceland showed “our lockdown may be a complete waste of time".

He said 10 percent of Iceland’s population had been tested and “about half the population at any given time has the virus and doesn’t know it”.

But it was nowhere near true that half the Icelanders were unwitting carriers of Covid-19.

Half of those who tested positive for Covid-19 and other respiratory illnesses were asymptomatic and unaware of it, but they accounted for less than 1 percent of people tested in the biggest testing drive - and possibly as little as 0.3 percent in the other main one in Iceland.

After another accuracy complaint was upheld against him in 2017, Hosking mocking the BSA in another Mike's Minute as a bunch of "humourless clipboarders . . who sit around “pontificating”.

He concluded there was no need for a standards body for the public to complain to. 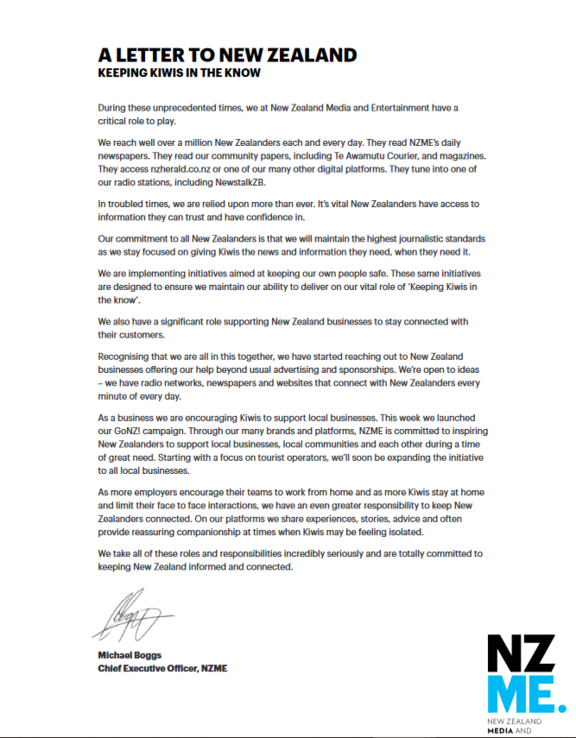 “Our commitment to all New Zealanders is that we will maintain the highest journalistic standards as we stay focused on giving Kiwis the news and information they need, when they need it,” he wrote.

He said NZME’s daily newspapers, including The New Zealand Herald, its digital platforms and NewstalkZB together reach more than a million kiwis a day.

“We take all of these roles and responsibilities incredibly seriously and are totally committed to keeping New Zealand informed and connected,” Boggs said.

Unveiling its annual results earlier this month, Boggs said NZME was an essential service during the Covid crisis.

“At times of crisis, New Zealanders turned to NZME to keep them in the know with leading news and journalism,” he said.

It’s hard to reconcile that with its willingness to defend inaccurate claims on its most popular news and information platforms from a broadcaster who has also used those to thumb his nose at the regulator charged holding media companies to basic standards they themselves helped to set and have pledged to uphold.