Breaking for the borders

There are more than 10 million Covid cases around the world and climbing - and more than half a million dead so far. New South Wales won’t take flights from neighbouring Victoria right now. But there have been long, loud calls in the media here to open the border and fire up international tourism. 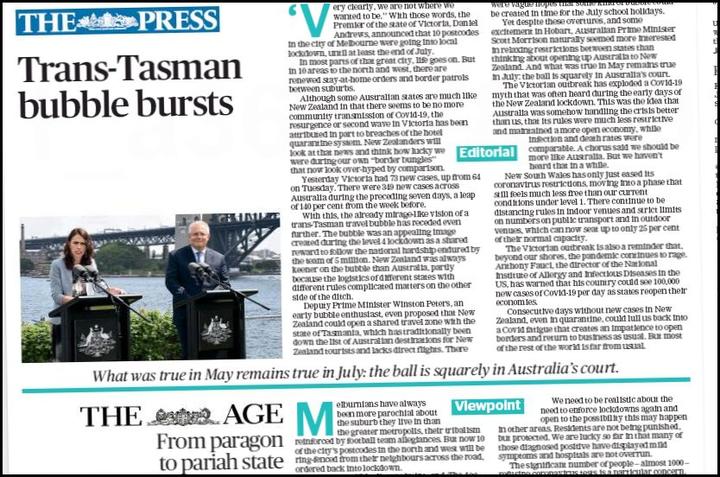 The Press and The Age in Melbourne of the same mind on opening borders. Photo: PHOTO / RNZ Mediawatch

On TVNZ’s Breakfast last Monday the PM bridled when John Campbell put it to her it was “good luck rather than good management” community transmission of Covid-19 had not resurfaced in recent days.

“Frankly it is insulting to say we're in the position we’re in because of good luck,” she said forcefully.

John Campbell was channelling an earlier guest on the show - National MP Michael Woodhouse - who claimed to know of “a swag of cases” where transmission was a possibility thanks to failures in quarantine and isolation oversight.

But writing on Scoop.co.nz, commentator Gordon Campbell reckoned some journalists were too willing to believe the worst and to echo opposition politicians’ blurts about “botches at the border.”

“Amidst all this talk of “fiascos” and ”chaos” anyone could be forgiven for failing to grasp that as yet, not a single person has become ill, let alone died as a result of these allegedly calamitous lapses in border security and quarantine testing,” he wrote.

After the PM’s plea for perspective on TVNZ's Breakfast, John Campbell described her response to his questions as “Churchillian.”

While that was over-the-top, Churchill’s finest hour also came when successfully protecting the borders of his island nation back in the day.

‘Team Churchill’ won the Battle of Britain 80 years ago this month, but to win the war they had to storm their way across the borders.

But that’s not an imminent prospect for New Zealanders today.

“This trans-Tasman bubble’s not going to happen any time soon is it?” John Campbell asked the PM wearily on Monday, acknowledging the spike in cases spreading in parts of Victoria. By Wednesday not even neighbouring New South Wales was accepting flights from there.

But in spite of all that, some in the media this week insisted a plan for reopening our border was urgent. 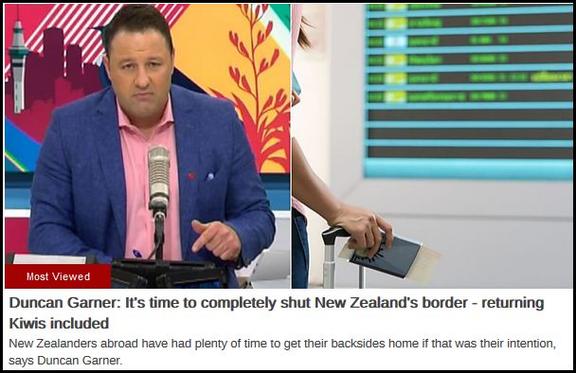 “Unless a second wave of Covid sees the globe drift into a Mad Max-type world - with New Zealand becoming a beacon of civilisation - we can’t simply live shut off forever,” he wrote.

That fear was shared - at length - by Mike Hosking on Newstalk ZB this week.

“Why are the borders still closed?” he asked.

“How is it England, with thousands of cases, is off to Benidorm? How is it the good people of France are off to the Amalfi Coast?” he asked.

Bookings are being taken in the UK in anticipation of limited travel next week between some European countries including the UK, Germany, France and Spain.

But the UK Foreign Office advice this week still stated Britons are still not permitted to travel abroad. Spain’s beaches were officially reopened to the public on 25 May in regions that have entered phase two of the government’s de-escalation plan, but although beach bars were also allowed to open with strict social distancing and cleaning measures many remain closed.

Nine out of 10 people on summer holidays in France right now are - reportedly - French.

Ireland’s chief medical officer told the paper people who have booked a getaway abroad should back out because of the risk of picking up Covid-19 and bringing it back.

“Many holidaymakers are wondering if they are worth the hassle and if their trip will be the relaxing break they had looked forward to,” Ireland’s Independent newspaper reported the same day.

Mike Hosking endorsed a warning from IATA - the International Air Travel Association - that quarantining people was killing international air travel and jobs around the world.

“Quarantine measures may play a role in keeping people safe, but they will also keep many unemployed. The alternative is to reduce risks through a series of measures," IATA’s president Alexandre De Juniac said in a statement.

“What was the point of a great health outcome if the economic one is a catastrophe? For a country that needs, relies on, and is beholden to the world, that's a disaster,” he said.

But what are IATA’s alternatives?

Aside from observing standard Covid-19 hygiene on the plane - and keeping passengers from high and low risk countries apart on the ground, the IATA plan is effectively this:

And that’s about it. Most of the heavy lifting is to be done by the government and authorities here - not by the airline industry.

IATA is effectively asking governments: do you feel lucky?

National Party leader Todd Muller and Business New Zealand also pushed hard in media interviews for a plan on when and how borders might be opened if the rest of the world hasn’t stamped out Covid-19.

Sir Peter told Morning Report now was not the time to open up - but it is the time to plan for how it could be done. He said we must look at how places like Taiwan are already doing it and the contact tracing we would need to have in place.

Some people resented the fact the trio commanded so much media attention with a paper that was just three-and a half pages long, light on detail - and which raised but did not answer no fewer than 22 separate questions.

But this is what Sir Peter, Helen Clark and Rob Fyfe wanted - a debate in public and in the media about how best to re-open borders when the time comes.

On his site Politik.co.nz Richard Harman said all this is also in tune with Sir Peter Gluckman’s mission to link together a number of “small advanced economies” around the world including New Zealand. Scientific experts are co-operating while diplomats and political leaders seem to struggle.

That sounds like more like something the media could examine, rather than the lobbying of overseas airlines and tourism - and pundits painting misleading pictures of fun in the sun in Europe’s holiday hotspots.