In this edition of Midweek Mediawatch, Hayden Donnell talks to Karyn Hay about a student magazine's stand against platitude-spouting politicians, MediaWorks taking a tumble in its dance the Tamakis, and NZME's ongoing interest in acquiring its biggest media rival.

Critic takes a stand against politics

Critic’s latest issue was censored by Facebook within minutes of going up on the site.

Its cover, which features a butt crack stuffed with many cigarettes, was ruled a breach of community standards.

Somehow what’s inside the issue has caused even more controversy.

The Otago University student magazine contains the debut editorial from Sinead Gill, which begins with the sentence “party politics is boring and bullshit, and politicians are too”.

Under the headline ‘Editorial: F**k The 2020 Election And F**k Anyone Who Wants Me To Cover It’, Gill promises the magazine won’t cover party politics.

“The truth is that parties will only ever offer f**k all to students until they: 1. Make tertiary education free for all. 2. Repeal voluntary student membership. Or 3. Give out free fifty bags when you update your enrolment info.”

It turns out the magazine interviewed three politicians before deciding they hadn’t said anything worth printing.

The page the interviews would have run on has the headline “Bla bla politics bla bla.”

Below are pictures of National MP Michael Woodhouse, Labour health minister David Carter, and Green Party MP Chlöe Swarbrick, along with the text “these interviews were all predictable as f**k. We will not be doing a write up.”

This anti-politics stance has angered quite a few people, among them former Broadcasting Minister and South Dunedin MP Clare Curran.

In response to the story, she tweeted “Sad & tbh small-minded to think that all uni students care about is fees. Has she heard about climate change or mental health? Or does she just exist in an ego-centric bubble? Happy to debate her any day.”

Gill responded: “If @clarecurranMP actually read the editorial, you would see I'm still covering issues, just not wasting my time on parties and point-scoring-orientated politicians.” 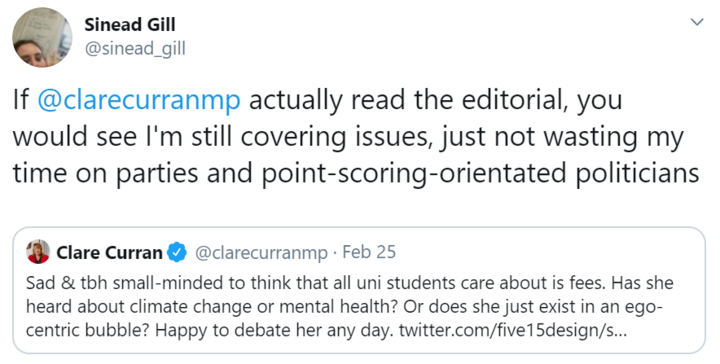 This run-in with Curran and others follows an incident last year, where Otago University’s Proctor removed somewhere between 500 and 2000 copies of the magazine’s menstruation issue from stands because he was reportedly offended by its cover, which showed a cartoon gender neutral person menstruating on a bathroom floor.

But are these run-ins with older people, politicians, authorities, and aggrieved student media alumni such a bad thing for the Critic team?

One of the unique qualities of student media is its ability to shirk the rules that govern the reporting of media such as, say, Radio NZ.

It might show rude pictures, or decide not to be mouthpieces for politicians who don’t say much, but surely that’s better than being, in the words of Gill, boring and bullshit.

Mediaworks no longer dancing with the Tamakis

It was also a dramatic week for MediaWorks, which was sucked into yearning maw of a social media uproar after Herald gossip column Spy revealed that Destiny Church's Hannah Tamaki was set to be one of the contestants on the upcoming series of Dancing With The Stars.

The Spinoff’s Emily Writes quickly spelled out all the reasons the decision was wrong, before launching a campaign to get MediaWorks to remove Tamaki from the show.

That campaign got support from within MediaWorks itself. Its flagship 7pm show The Project led on Monday with an editorial from host Kanoa Lloyd, where she said she didn’t want to see a  “homophobic paso doble or a xenophobic cha cha”

“The ideas that the Tamakis have can actually be deadly. There would be no Christchurch mosque shootings if it wasn’t for dangerous ideals like that, and our LGBT community are at way higher risk of dying by suicide. That stuff is properly dangerous.

That prompted a lurid response on Facebook from Jevan Goulter, the campaign manager for Tamaki’s political party Vision NZ.

He posted saying LLoyd is a "rancid rotton [sic] stuffed pig with blood pouring out of her eyes" who should "show NZ what voluntary euthanasia looks like".

Goulter was sacked from Vision NZ, but it may have been the last straw for MediaWorks. It announced Tamaki would no longer be appearing on Dancing With The Stars.

It’s worth noting that Lloyd was just the latest in a line of journalists who have criticised their colleagues for their more strange and backwards views recently.

Other examples include Simon Wilson responding to Mike Hosking’s threats to leave Auckland over his rage at having to negotiate road cones, Eleanor Barker-Hunt also hitting back at Hosking over his criticism of Greta Thunberg, and in some reactionary pundit on reactionary pundit violence, Sean Plunket fighting with Mark Richardson on the right to silence.

In these cases, media organisations are essentially closing the loop: they’re profiting first from the outrage generated by their staff’s controversial opinions, then harvesting more clicks from internally generated columns responding to those opinions.

It makes commercial sense, but some readers may find it a bit galling seeing media companies act like they’re agnostic arbiters of the debate.

When people like Lloyd, Wilson, or Barker-Hunt have to write these editorials, the question could be asked: wouldn't this all have been unnecessary if their own organisation hadn’t employed that person in the first place?

It had some good news and some bad news. The good: subscriptions for the NZ Herald Premium digital-only service have grown to 21,000. Radio revenue is strong, growing 5% in the second half of 2019.

It also recorded a loss of $165 million, but that was due to a write-down of intangible assets. Goodwill went from $70 million and the value of its newspaper assets went from $147 million to $74.3 million.

Perhaps most interesting was that it is pressing forward with plans to acquire Stuff via a Kiwishare model. NZME chief executive Michael Boggs says the company "firmly believes it is the right owner for the Stuff Ltd business.”

The Commerce Commission knocked back NZME’s last effort to buy Stuff in 2017, but it has countered with a Kiwishare model for acquiring the businesses. That would see Stuff kept in a subsidiary company that would hold its journalist numbers at agreed levels.

NZ First backs the idea. Boggs is talking like the government might be on his side. Could we see StuffMe Version 2 in the coming year?