Mediawatch's weekly catch up with Lately. Jeremy Rose talks to Karyn Hay about local body election coverage, David Byrne's new journalism venture, fires from Siberia to Indonesia, and the invisibility of women and children in the media.

David Byrne's Reasons to be cheerful

Singer David Byrne has launched an online magazine called Reasons to be cheerful. And as the name suggests it aims to be a tonic for the unrelentingly negative news that dominates much of the media. 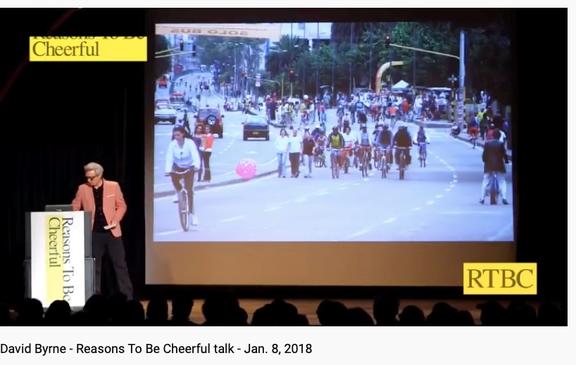 Photo: Reasons to be Cheerful. Screenshot

First announced nearly two years ago the magazine features stories about people and movements from around the world finding solutions to universal problems.

Not surprisingly as an avid cyclist Byrne dedicates plenty of space to bicycles and other non car-based solutions to urban transport. Brian Eno makes the case for nuclear power in an ongoing discussion with Byrne and there's a story looking at how when business responds to activist pressure it can have a positive impact beyond just that business. A case in point is when McDonald's required its egg suppliers to provide more space for the laying hens and it resulted in longer-living and more productive chickens.

Local body candidate billboards are springing up like daffodils in spring. The standard bill board has a photo and maybe a promise of "accountability" or better public transport or some other political cliche. If you want substance you'll have to look elsewhere.

Last Saturday's DominionPost dedicated a full page to profiling all the candidates in for the Kapiti Coast District Council. Architect Rosalind Derby wrote:

"Coming from the building industry, I can engage design thinking within local governance across the layered range of infrastructure strategy. Operating horizontally within council, sourcing staff into local teams alongside management and councillors. Working groups with local business, having a mandate for community / environment / urban social impact."

"50 words are not sufficient to discuss the complexities of local governance."

And she's got a point. It really is impossible to get much idea about a candidate's policies or background from a 50 word blurb. It's understandable - unavoidable even - that a print publication gives candidates a pretty miserly word limit but harder to understand why they're not provided with more space online.

The Spinoff has announced Policy Local an online tool that will compare the policies of candidates in all the 573 local body elections next month.

It was a popular tool in the last general election and looks likely to be invaluable in the upcoming local body elections.

And Figure.nz - a site dedicated to making statistics easily available and relevant to New Zealanders - has launched Figure.NZ Places - an interactive site that gives you a whole range of facts and figures for all the country's regions. Everything from population and income stats to the number of pokies. Invaluable to both journalists and candidates.

But choosing a candidate isn't just about their policies - equally important is how they're likely to perform. The NZ Herald's Simon Wilson and Bernard Orsman rated Auckland's sitting city councillors in the Weekend Herald.

It's interesting to compare the two veteran journalists' take on the candidates and a useful guide - though it possibly puts any new blood at a bit of a disadvantage. It seems unlikely there's any other council in the country that has had two senior journalists who have sat through quite as many council meetings as those two - so we're unlikely to see it replicated in other parts of the country.

But someone called Nick has done a very thorough job of comparing candidates in Hamilton in a 35 minute YouTube video.

Nick rates the candidates on their ideas on diversity and harmony, the economy, climate change, poverty, finances. He limited himself to their on-line presence. First up in Nick's rating is Rudi Du Plooy - a former Johannesburg city councillor who Newshub reported celebrating a "racist" South African holiday back in 2017. Nick doesn't rating him highly in the diversity and harmony stakes.

The fires in the Amazon have been attracting worldwide attention but a feature in the New York Times highlights that it's not just the Amazon that's burning. Simon Remiro reports that since July fire has engulfed more than six million acres of Siberian forest and 2.5 million acres of tundra and snow forest has been consumed by fire in Alaska.

And closer to home in Indonesia there's massive clearance of rainforests by farmers wanting to grow soya. So both tofu and beef consumption are behind the intentional burning of forests.

Time magazine reports that there's more fires in Africa than anywhere else on Earth. "NASA has called Africa the “fire continent,” home to at least 70% of the 10,000 fires burning worldwide on an average August day, though the agency says the number of fires is consistent from year to year."

Brazilian Jair Bolsanaro - with his contempt for the indigenous people and pro-rancher rhetoric - is often seen as one of the key culprits. But the Guardian in an article this week pointed out that Evo Morales - the first indigenous president of Bolivia and one of the first leaders in the world to legislate the rights of nature has also been promoting burning the forest for food production.

Meanwhile, the Independent reports that previously warring Amazonian indigenous communities are uniting in their opposition to Bolsanaro.

And veteran TV journalist Phil Vine - now with Greenpeace -  has a first person account of the Amazon fires in this week's Listener. He reports - using that classic Kiwi metric - that three rugby fields a minute are being lost to the fires. (And who knew that Brazil nuts can't be farmed?) Greenpeace will be releasing a documentary by Vine on the human effects on the global food system for Greenpeace International next month.

A recent Australian study found that a third of news stories impacted directly on young people but only 1 percent quoted a young person.

Seems likely the situation is the same on our side of the Tasman. This week it was reported that there were 135 incidents of self harm in Oranga Tamariki homes by young people in the last five years. No young people were quoted in the story.

Children it seems are seen not heard in our media. And last Saturday Guardian ran a story making the same point about women. In its stand-first it asked: "Why don't journalist think women are people?" 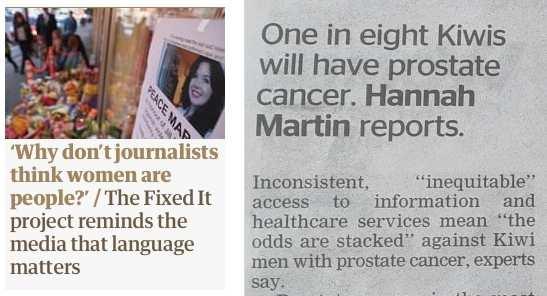 The Guardian story was actually about the invisibility of women deemed unworthy of our sympathy. It was an extract from Fixed It a book by Jane Gilmore which was published yesterday.

Gilmore re-writes takes a red pen to headlines that she finds offensive and misleading and then tweeting them.

Here you go @ballaratcourier I fixed it for you because Father's Day does not cause violence#FixedItVictimBlaminghttps://t.co/VEKFRNyCB7 pic.twitter.com/I1YFplbySM