Recent elections overseas were won by narrow margins amid claims voters were influenced by messages injected in their social media feeds from political parties.  Is all this coming to an election near you in 2020? And why are you picking up the bill for the kind of political ads that now have a bad name around the world? 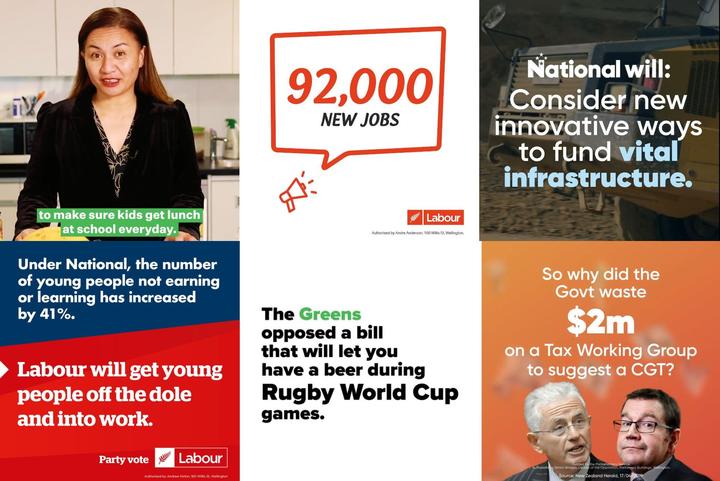 To try and win a fresh election, the ruling National Party dissolved Parliament during the upheaval of the waterfront dispute - a bit like the UK’s PM Boris Johnson did this week to push through Brexit.

The book by Claire Robinson, Professor of political marketing at Massey University, shows persuasive political ads targeting specific citizens were a thing long before social media, but 80 years after that Labour ad pointing out what it saw as Sid Holland’s hypocrisy, a sudden surge of partisan ads on social media will test New Zealanders’ tolerance for political trickery in the digital age.

Controversial public votes in the UK and the US in recent years have been won by narrow margins amid claims voters were influenced by misinformation injected straight into their social media feeds by political parties - and third parties with an axe to grind.

“I honestly never thought I would be campaigning here in the UK to establish the primacy of truth,” the head of news at the UK broadcaster Channel 4 Dorothy Byrne said last weekend in the Edinburgh festival’s annual MacTaggart Lecture.

“If we are going to be asked to cast our votes on the basis of lies, then democracy is in trouble. Hang on a minute, did that already happen?,” she asked rhetorically in her powerful speech.

Ms Byrne said politicians now routinely bypass the news media - and the possibility of scrutiny - by sending messages out via social media where they are unregulated.

As soon as he got the leader's job last month Boris Johnson and his Conservative Party churned out more than 550 Facebook ads linked to a survey on the Conservative Party website. Respondents were asked for names, postcodes and email addresses - all likely to end up in a database for future election campaign advertising.

Here both Labour and National have already copied the big British political parties’ tactics in the past  - as Mediawatch discovered three years ago. 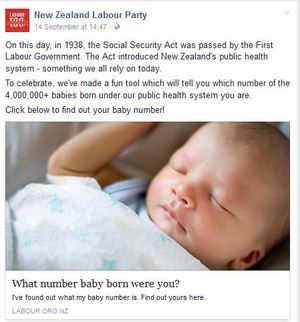 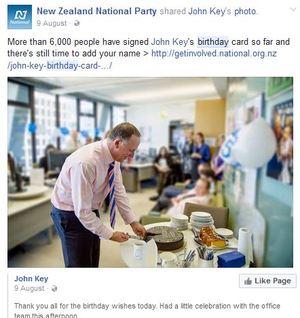 Now our politicians are looking at a recent election much closer to home. Australia’s campaign had more aggressively-targeted online ads than ever before with lots of claims and counterclaims posted on social media.

Last month Stuff political reporter Thomas Coughlan reported National thinks it's got a winning formula from its counterparts across the Tasman.

Last weekend, Stuff political reporter Henry Cooke said political parties here are already running many more Facebook ads than usual. National had 14 ads running on one day, he noted, in a campaign against the government's proposal to make electric vehicles cheaper and gas guzzlers more costly in the future.

These echoed Liberal Party ads in the Australian election that claimed (falsely as it turned out) that Australia’s Labor Party was going to “tax your ute.’’ Two of those National Party ads will be investigated by the Advertising Standards Authority after complaints they were misleading.

The governing parties are into this too. Labour personally criticised the National Party leader’s commitment to climate change in an online ad campaign - and The Greens were forced to scrap and apologise for an even more florid attack ad that was supposed to be satirical. 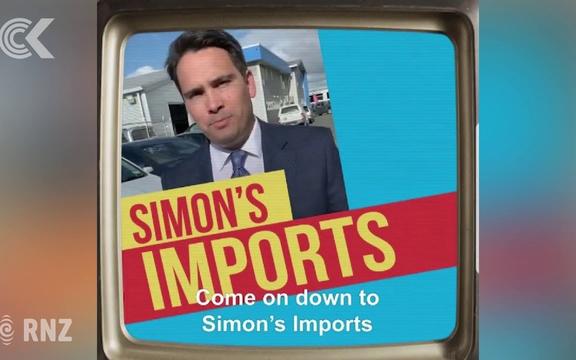 “I will withhold my judgement in whether or not we will see some of the practices from overseas in New Zealand. I think the general public in New Zealand want to see politics done in a way that is clean,” PM Jacinda Ardern told Stuff reporter Henry Cooke last Tuesday.

That answer was not a commitment to a clean campaign online. TVNZ’s Q+A show last Monday warned Kiwis to gear up for “dirty politics”.

“There's not much that's original in politics,” she told the programme.

Lobbyist Tomas Pryor said: "I think what we're going to see is parties here modelling themselves in some way on what we first saw in the EU referendum - where you get out a bold claim that may not necessarily be 100 per cent true and  . . . it's a strong enough claim that it will stick in voters' minds. And even if down the track it's disproven or you have to correct it slightly or it's challenged by your competitors, it's almost too late."

That's a handy heads-up from a lobbyist who knows the tactics, but Q+A didn’t say what’s in place to counter misleading political ads or prevent them going out online in the first place.

The Advertising Standards Authority deals with complaints about all election advertising in non-broadcast media. For the last election the ASA ran a 'fast-track' process during the campaign period which required a response from the advertiser and any other relevant party within 24 hours of a complaint - and its website says most complaints were settled within three or four days.

The ASA told Mediawatch the arrangements for next year’s election have yet to be determined.

In the Stuff papers last weekend reporter Henry Cooke pointed out that misleading political ads can go out on Facebook and finish their run long before the ASA can assess them.

“We will see a lot more online political advertising. Political parties have much more knowledge of how the platforms work and they're clearly very effective,“ Stuff political reporter Henry Cooke told Mediawatch.

But he also said Facebook has a new transparency tool for political ads in use overseas - and none of our parties have signed up to it yet. 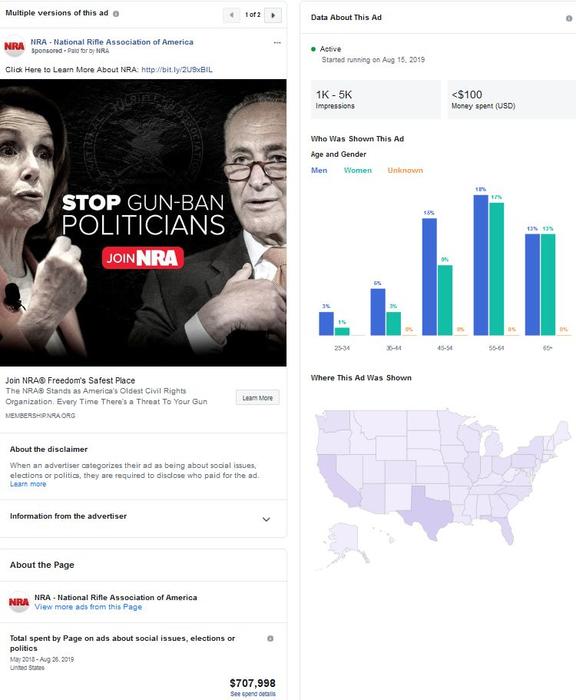 The Facebook Ad Library Report is an online database that Facebook has made mandatory in several countries. It allows the public to see how much money is being spent on political ads by parties or issue groups, how long the ads were run and who the ads targeted.

The tool has been available to our political parties since June, but most reacted with surprise when Henry Cooke asked them about it. The Green Party has agreed to sign up to it, he said.

Another issue with the anticipated upswing of paid political ads on social media in election year: you will have helped to pay for them.

Electoral law changed in 2017 to allow political parties to spend more of their own money on online ads - as well as $750,000 previously earmarked by the Electoral Commission for opening and closing addresses on TV and radio.

Most politicians backed the change at the time - and so did many media. TVNZ actively lobbied to scrap the campaign addresses.

Should they all have been careful what they wished for?

"Some money from taxpayers will be going to Facebook ads at election time, but it already does.The corollary of that is without public funding the parties with the biggest donors would be able to best exploit this stuff," Henry Cooke told Mediawatch.

"Parties could probably say they spend their donors' money on Facebook ad campaigns and the public money on traditional media advertising," he said. 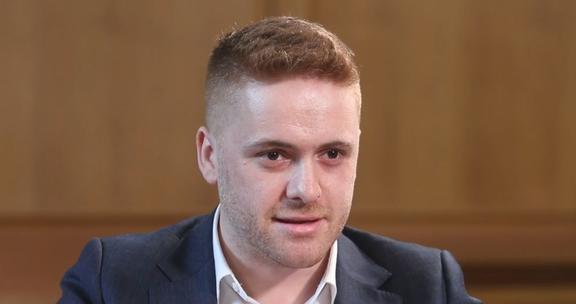 ‘Media companies the world over take on some responsibility for the ads on their platforms, and Facebook's scale is no excuse for it to avoid this completely," Henry Cooke wrote in an opinion piece last weekend

"It doesn't have to vet every ad as it comes in, but it should be able to respond promptly to complaints about blatantly false advertising,“ he said.

He also warned that journalists have a job to do - as well as the ASA and the politicians.

“Reporters need to be paying close attention to the campaigns that parties and other groups are running online, vigorously fact-checking them, and providing readers with objective analysis,” Henry Cooke wrote.

Parliament’s Justice and Select Committee is still running the official inquiry into the 2017 election. Earlier this year it asked for submissions on ”how New Zealand can protect its democracy from inappropriate foreign interference” including the risk that political social media campaigns could be “driven by external entities”.

The GCSB in its submission said it found no evidence of foreign interference, but it noted New Zealanders online are “highly likely to encounter” content from international disinformation campaigns.

“This would most likely impact on domestic debates fuelled by distrust of authority and facts,” said the GCSB submission.

Clearly something to keep an eye out for in 2020.