‘Blowhard’ with a vengeance

Lots of listeners heard Alan Jones’s violent verbiage directed at Jacinda Ardern last week on the air in Australia, but the worst of it only hit headlines this week. Will the outcry run the belligerent broadcaster’s long and lucrative career off the rails? 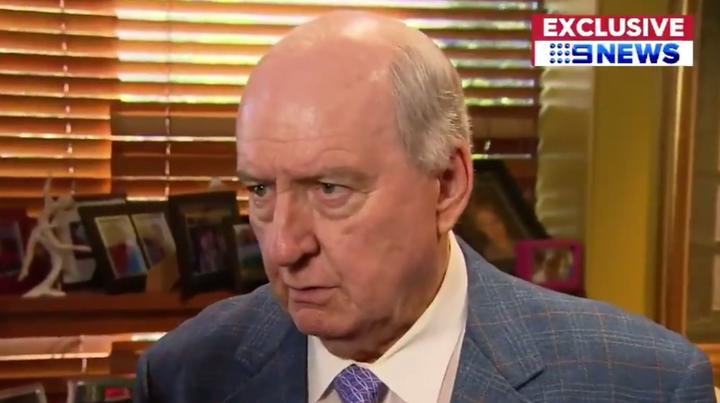 “In Australia they all know Alan Jones is a right-wing blowhard,” lobbyist Neale Jones said on RNZ’s Nine to Noon politics slot this week.

“In New Zealand I think we took his comments more seriously than the Australians did,” he reckoned.

But the ageing shock jock’s remarks on Sydney-based station 2GB sparked two bursts of headlines and strong reactions across the ditch which have put his radio job in jeopardy.

This weekend, one of the country’s biggest-spending brands, the Commonwealth Bank of Australia, said it was “dismayed” and has “no more planned advertising” on Alan Jones’ show.

A large stake in 2GB owner Macquarie Media is in the hands of the Nine company which is currently trying to buy the rest of it.

“That business can survive the loss of any of its talent,” Nine's CEO Hugh Marks said ominously last Thursday.

“Do you have a problem with women?” a reporter asked Alan Jones on Monday night’s Nine News in Australia.

“You’d have to ask women that,” Jones replied.

“I’m not the kind of guy who pumps up his own tyres,” he added cryptically. 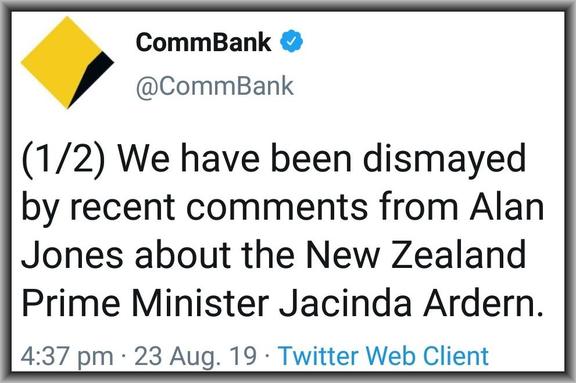 Four days earlier the veteran 2GB talk radio host made headlines when he urged Australia’s PM Scott Morrison to “shove a sock” down the throat of our PM Jacinda Ardern to silence her “lectures” about climate change.

That blurt was sparked by Jacinda Ardern’s reply to a reporter at the Pacific Islands Forum in Tuvalu.

She said Australia would have to answer to the Pacific states on climate change - something that was self-evidently true as leaders of Pacific Island states had raised the issue at the forum.

Half an hour earlier Alan Jones had told 2GB listeners: “I hope Scott Morrison gets tough here with a few backhanders.”

“If I see her again on TV I’m going to puke,” he added 15 minutes later (a less threatening opinion, but a weird one for breakfast-time radio).

Newshub reported the Alan Jones  insults on Tuesday as “fresh comments that appear to have been overlooked” until they were “unearthed by the ABC”.

Newstalk ZB also called it “fresh audio” - though it was actually almost five days old at that point and hundreds of thousands of people in New South Wales would have heard the comments on the air last week.

ZB’s source for that was Rupert Murdoch’s News Corp in Australia, but on Monday morning News Corp’s own flagship paper, The Australian, had already explained precisely how the comments hit the headlines.

“The geniuses at 2GB's online team decided - in their wisdom - to heavily promote Jones's remarks. They ran his comments in full as the lead story to top the entire 2GB website,” the paper reported.

2GB even made the comments shareable on social media, where a trickle of reaction quickly became a flood.

Advertisers started pulling out and social media activist group Sleeping Giants even tweeted the postal address of 2GB’s CEO urging people to send him socks to use on Alan Jones's throat.

Walking it back - while doubling down

In the afternoon, Alan Jones dodged out of a funeral to phone-in some damage control on 2GB.

But on Newstalk Zb’s Mike Hosking Breakfast the following morning, Alan Jones made it clear he still wanted Jacinda Ardern silenced with a sock.

“Someone's got to tell this woman to keep quiet, put a sock in it. I wish she would shut up,” he told Mike Hosking.

The 'sock' controversy slipped out of the headlines until Monday's “backhanders” revelations by the ABC re-upped the bad PR.

Jones’s employers warned him one more spray like that one and he would lose his 2GB job.

The comedy crew The Chaser mashed up many of Alan Jones's greatest hits in a spoof ad aimed at 2GB's jittery commercial clients.

Alan Jones bullishly claimed there would be plenty more clients in the queue wanting to be on his show. (What was that about not pumping up your own tyres, Al?)

But what really wound up Alan Jones on 15 August were his own views on energy - a hugely political issue in Australia where political and financial fortunes are staked on energy policy.

Jacinda Ardern was really only a fleeting focus of the on air rant in which Alan Jones raged about China’s emissions dwarfing those of the controversial Adani coal mine recently approved in Queensland.

Alan Jones will almost certainly now be investigated by the Australian broadcasting watchdog - the Communications and Media Authority  - which has upheld complaints in the past about his on-air conduct.

On ABC radio in Victoria this week, an expert in media ethics darkly warned that the allies which make Alan Jones a political player in Australia will probably protect him from punishment.

“"The ACMA is called a 'co-regulator'. Nobody does anything unless all sides agree. I don't expect there will be consequences," said former journalist Denis Muller, a fellow at the Centre for Advancing Journalism in Melbourne and author of a soon-to be published study: In your face: How news media reports affect attitudes to violence against women.

“The ACMA has independence on paper . . . but it does not work in a political vacuum," he told Mediawatch.

Denis Muller says advertisers have withdrawn from Alan Jones's shows before after controversial comments only to return later.

"In the short term it will be a bit embarrassing but I don't think that will last more than a few days to be frank," he said.