NZ on Air funded programmes taxing your wallet and your eyeballs 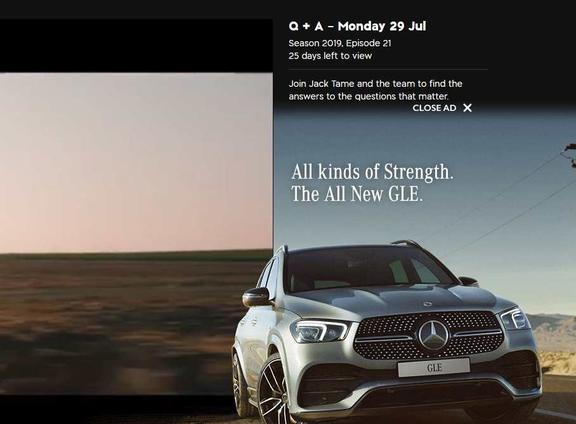 Over the coming year NZ on Air plans to spend $37.7 million on factual programmes and $46.4 on dramas and most of the resulting content will find its way to the on-demand services of the various broadcasters and media organisations receiving the grants.

NZ on Air also doles out close to $60 million in platform funding "to specially targeted services to create and deliver audio/visual public media content of particular cultural or social value."

Chances are if you watched any NZ on Air funded programmes on demand you've sat through eight or so 30 second ads.

And if you have you've almost certainly been bombarded with adverts for SUVs - be it the latest Mercedes, Holden or Hyundai ad.

Adverts are in one sense the original fake news. Everyone knows those shiny SUVs are more likely to be found in supermarket carparks, Auckland traffic jams or bumper-to-bumper outside the school gates than on the winding mountain roads or wide-open beaches that they’re invariably shown cruising on.

Fake they may be but In the past ads like those helped fund much of the journalistic content you saw on TV.

But now you’re forced to endure them if you want to catch up with programmes you’ve already paid for through NZ on Air.

Car manufacturers are among the biggest spenders of online video advertisers – spending $360,000 dollars in February alone. Only banks spent more.

But whereas virtually all of us use banks only a fraction of one percent of us are in the market for a new SUV. (28,453 private individuals bought SUVs in 2018.)

With TVNZ charging $180 per thousand views for a 30 second spot your eyeballs cost the advertisers 18 cents per ad. Not only are the ads interrupting your viewing – they’re virtually guaranteed to be a complete waste of your time.

If they were to pay you directly at, say, the average hourly rate of $32, it would cost closer to 27 cents. If four people are watching the one screen – then the advertisers ends up paying just 4.5 cents for more than a dollar of the group’s combined time.

So just how much revenue do our television companies generate from programmes that are paid for out of the public purse?

So-called commercial sensitivity means none of them are about to disclose that information to Mediawatch.

But they’re happy to share viewership numbers and their rate cards so we can take a rough stab at the likely amount being earned from their on-demand services.

Eight 30 second ads screen on the on-demand version  – with around half of those being promos for other programmes on TVNZ on Demand – so based on the state broadcaster’s rate card it could have earned up to $18,000.

If we place the same value on our leisure and work time the cost to us the viewers is more like $56,000.

Having already paid for the documentary to be made and as the owners of TVNZ should the New Zealand public really have to sit through ads for products – that in many cases -  they’re not even in the market for?

Mediawatch asked TVNZ whether it had any thoughts of making NZ on Air content advert free on its on-demand service.

"It’s not something we’re considering. NZ On Air funding goes directly to production companies, rather than TVNZ (with the exception of Country Calendar, which receives NZ On Air funding and is made in house). TVNZ pays a license fee to each production company for use of the content. As TVNZ pays license fees to the creators and also provides the operational work to broadcast the content (TV playout, broadcast equipment and the personnel associated is TVNZ’s cost), it wouldn’t be feasible to remove advertising from funded content."

Rachel Howard said TVNZ has been considering allowing the public to experience an ad free version of its on demand service for a fee but said the broadcaster had no announcement to make on the issue at this stage.

She pointed out that TVNZ’s – NZ on Air funded – children’s on demand television service Heihei is advert free.

A spokesperson for NZ on Air said the decision of whether to screen ads during NZ on Air funded programmes available on-demand was a commercial one and entirely up to the broadcaster or platform hosting the programme.

If you want a taste of what an ad free on-demand service for publicly funded NZ programmes might be like head over to Maoritelevision.com and you can view everything from the new animated comedy Aroha Bridge to the current affairs show Te Ao with Moana completely ad free.

So has Maori Television taken a principled stand and decided it’s wrong to pepper ads through programmes paid for out of the public purse?

No – a spokesperson told Mediawatch - Maori Television operates in a commercial environment and it’s happy to play ads if anyone wants to pay for them.