Broadcasters say their political polls aren’t perfect but they do reveal significant swings of support. In that case, they ought to notice more and more people don't like being asked to pick a 'preferred prime minister'. 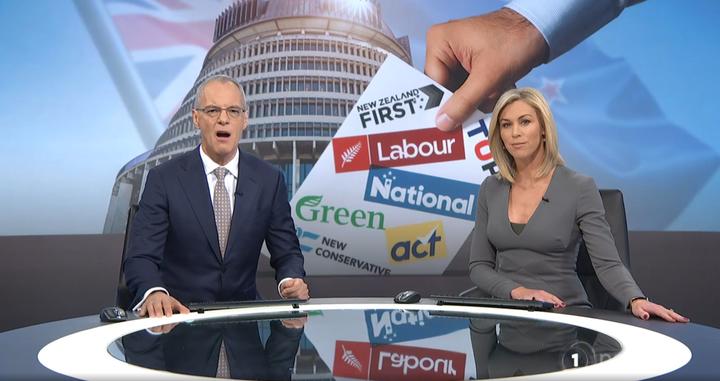 Newshub often ignores the political polls of its TV rivals at TVNZ but last Monday it seized on the latest 1News Colmar Brunton survey.

But he was actually up one point on the previous TVNZ Colmar Brunton poll and level with colleague Judith Collins on 6 per cent.

That’s an even better showing than the 4.2 per cent in Newhub’s own most recent poll two months ago - a result that prompted political editor Tova O’Brien to say Simon Bridges was the rotting head of a fish that would have to be cut off.

In which case it’s handy he still has a head - rotten or not - on that neck.

In the end, it makes little difference whether he's on 4.2 per cent, 5 or 6 per cent, but Newshub was also interested in an even more marginal presence in their rival’s new poll.

“A new face has appeared. The poll shows 1 per cent of respondents want outgoing CEO of Air New Zealand Christopher Luxon as their PM,” Newshub reported.

“Christopher Luxon hasn't even joined the political race, but still features in the preferred prime minister stakes in the latest One News Colmar Brunton poll,” RNZ.co.nz reported soon after the big reveal on TVNZ 1 News on Monday night.

“People are thinking beyond Simon Bridges and gazing into the future of the National Party,” she said.

One per cent would mean 10 people out of the 1003 sampled had preferred Mr Luxon to lead us.

But it was actually more like six. The full poll results on the Colmar Brunton website show the result was 0.6 per cent which TVNZ rounded up to 1 per cent - a statistical boost of 40 per cent, to be pedantic. 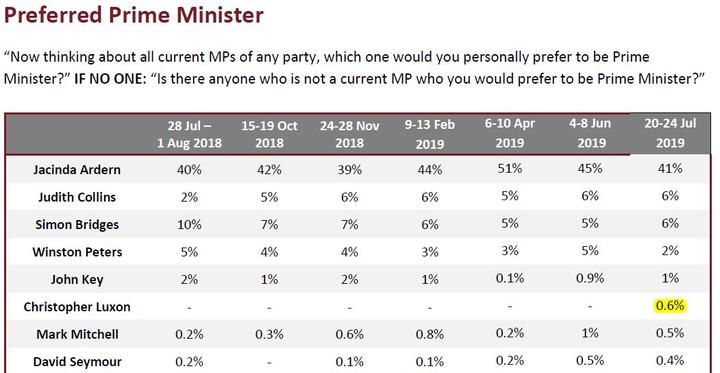 That amounts to one more than the five people who plumped for National MP Mark Mitchell. Four people picked ACT’s David Seymour as preferred PM.

The angle was the same on Newstalk ZB news the next morning even though political lobbyist and pundit Ben Thomas had just told ZB it was only a media-driven blip.

“Christopher Luxon doesn’t have a huge groundswell of support among the public. His name was flashed in lights as a potential National Party leader by the media when he announced his resignation from Air New Zealand,” he said.

Indeed it was. He was said to be flying high by many in the media then even though his preferred political party and policies were entirely undeclared and unknown.

One other person who’s not in politics actually did get 1 per cent in the TVNZ Colmar Brunton poll on Monday.

John Key appeared on Three’s show The Project on Monday night an hour later and said it was a good showing for a guy who hadn't showed his hand.

The Project didn't mention Mr Key is a director at Air New Zealand and didn't ask if he'd had a role in Mr Luxon's possible political career or whether he's building a bridge to National.

When host Jeremy Corbett asked John Key why he had turned up on the show, Key replied it was only because the producers had begged him.

John Key did say Jacinda Ardern appears to be a popular PM and the 41 per cent of people polled by Colmar Brunton who preferred her as PM proves that.

But the popularity of asking us who we prefer is definitely going south.

In this week's poll, those who didn't prefer a PM, didn't know which one they preferred or refused to answer totalled a whopping 38 per cent of the sample.

When TVNZ and Newshub simultaneously released political polls in June, 33 per cent of the Colmar Brunton sample poll didn't or wouldn’t name a preferred PM. Newshub’s pollsters Reid Research didn't say how many opted out, but ‘don't knows’ or ‘don't cares’ bounced between 19 and 30 per cent between 2104 and 2018.

If current trends continue, they will soon outrate Jacinda Ardern - unless perhaps a more popular business executive or even a random Ukrainian comedian comes out of nowhere.

The night after the ‘Luxon surprise,’ TVNZ 1 News told viewers the same people polled by Colmar Brunton were a lot more willing to take a side on the tricky issue of assisted dying.

Only 8 per cent of people polled didn’t know if “a person who is terminally or incurably ill should be able to request the assistance of a doctor to end their life.” 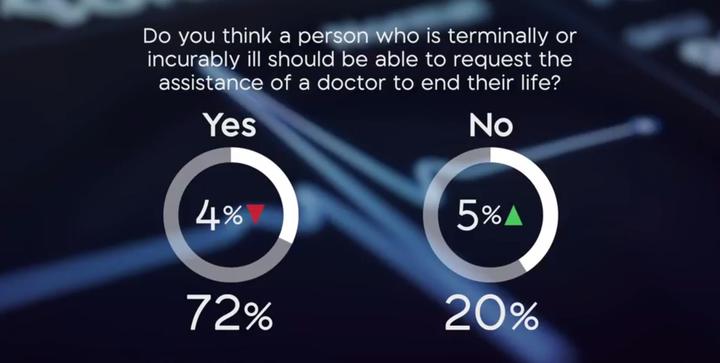 Given a say on 'preferred PM polling,' plenty of citizens would probably vote to put it out of its misery - and with it, the bogus political stories our news media conjure from them.

The question is clearly a lot less important to real people than it is for the media looking for stories about high profile leaders.