Mediawatch's weekly catch-up with Lately. Colin Peacock talks to Karyn Hay some up-close coverage of the fallout from 'Taken by the State' - and how the media dealt with what the hell happened at Lords. Also: a drought-breaking surge of local TV comedy and a surprising comedy confession.

Full credit to the media?

Lots has been said about that mind-blowing final already but . . . it was an interesting challenge from a newsgathering and broadcasting point of view.

First challenge was to explain what was unfolding for those waking up and tuning in. A game had never ended this way before.  Super overs, boundary countbacks, accidental boundaries etc.

Then there were people who woke up just after it was done and dusted and wanted to find out what the hell happened.

Major plaudits to Prime TV / Sky for the 8am Special on Monday summing up the game.

Eric Young and panel of four expert pundits including Kyle Mills and Frances McKay provided a great service to those like me without Sky TV. It was produced by Lee Knighting and James Cameron.

Here’s another bit of classy production Eric recommended on Twitter:

ICC TV caps off World Cup 2019 in style. It bears repeating that one of the best parts of this tournament has been its coverage. Cricket presented to fans like never before. Great work @Edged_and_taken @alistairjhogg pic.twitter.com/VJcgUuTIzu 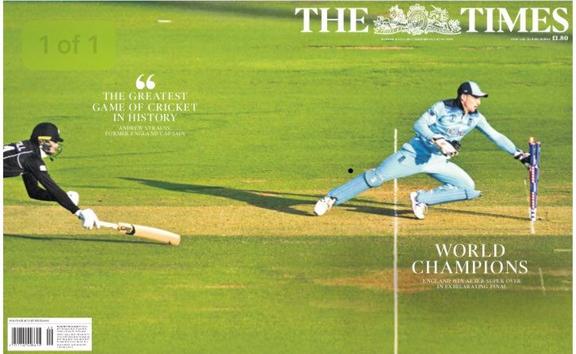 The Times had it covered front and back on Monday. Photo: screenshot / Twitter

TMS wanted shout-outs from listeners in all 193 UN-recognised nations of the world, but on the final dayof the CWC they were still to hear from Chad, Eritrea, Somalia and North Korea.  They checked the junk mail and found second hand claim of a guy on a ship that sailed past Somalia during the Cup. ( . . . bit of a stretch)

And the British embassy in Pyongyang send a short video at the last minute to tick off North Korea.

TMS put up a special podcast of the closing stages called  The Cricket World Cup: The Super Final Hour

I clicked on it to see how they’d be dancing on our grave or being like Kane, but all I got was

Presuamably that's a broadcasting rights issue. But maybe they geo-blocked it for humanitarian reasons?

Of many hot takes on the experience: Newsroom’s Steve Deane’s one stood out Spoiler alert: This World Cup final will make you sick

This column may, in fact, end at any moment, consigned to be a mere part-column by illness across a keyboard.

So we better get to the point.

If you didn’t watch the Cricket World Cup final, and are reading this column in hope of catching up on events – don’t. Don’t read this. Don’t read anything. Don’t watch anything. Don’t talk to anyone. Because, if you are a New Zealand cricket fan, there is only one path to anything resembling contentment.

One man whose post-match humour fell flat was the ODTs cranky cartoonist Garrick Tremain, who picked an odd time to make a point about child abuse in Tuesday's paper: 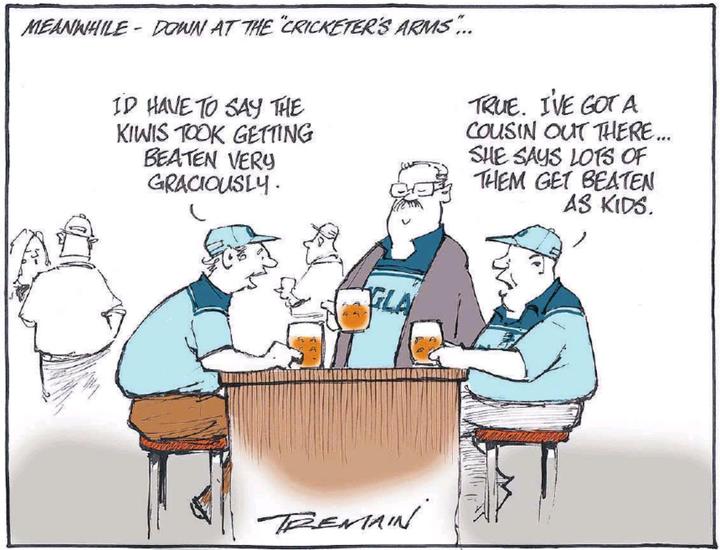 You can't be serious . . . the ODT's cartooning curmudgeon gets his timing wrong. Photo: PHOTO / RNZ Mediawatch

However, the next day the ODT proved its headline writing hasn't gone downhill.

Further fallout from 'Taken by the State' 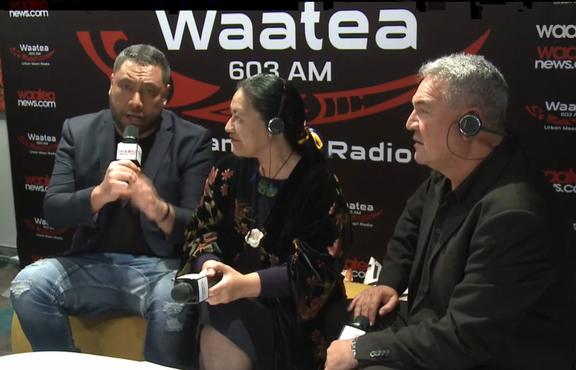 Newsroom was back on the case with an interesting collaboration last weekend.

Bonnie Sumner  - a freelance journalist in Hawkes Bay - reported from the national hui which brought Maori leaders together with whānau affected by Oranga Tamariki.

And the newsroom site carried the full broadcast of the even made by Radio Waatea, which put the whole six hours up on Facebook Live hosted by Dale Husband and Claudette Hauiti. 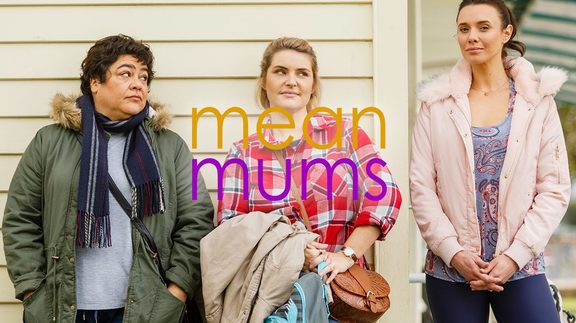 There have been false dawns and a few false starts in local comedy on TV.

Recently Fresh Eggs had to be pulled after the Christchurch Mosque attacks. It wasn't so fresh when it reappeared and sank without trace which is a shame.

But from this coming week, comedy is all over the place on TV.

Last year, Three ran five new pilot comedy episodes with a view to giving the two most popular ones a full series - and they debuted on Tuesday.

Golden Boy is about a failed journalist with an All Black for a brother. The other is Mean Mums.

On Sunday the first episode of Funny As - a five-part history of New Zealand comedy is n TVNZ 1 and TVNZ OnDemand.

And next week, new new quiz / panel show Have you been paying attention? - a local reworking of an Aussie show - begins on TVNZ2.

On not-quite-so-imminent new show I have high hopes for is a new Guy Williams series which sounds like an longer version of the New Zealand Today segments he did for Jono and Ben - such as the classic classic Haast one:

He was the guest on the ZB show Total Recall last weekend on Newstalk ZB, hosted by Frank (Media Chaplain) Ritchie.

Guy seemed taken aback by Frank;s deep research and made a surprising admission about some skulduggery that kickstarted his TV comedy career.