This week Newshub and RNZ ran interviews with far-right Austrian activist Martin Sellner. Mediawatch's Jeremy Rose argues neither provided the background required for their audiences to appreciate just how extreme his views are.

It was an odd description of the far right Austrian activist who as a teenager was convicted of plastering a swastika on a synagogue, and as an adult leads a movement that disrupted a play performed by refugees in Vienna by spraying blood over audience members and chartered a ship in an attempt to stop NGOs from rescuing asylum seekers from drowning in the Mediterranean Sea. 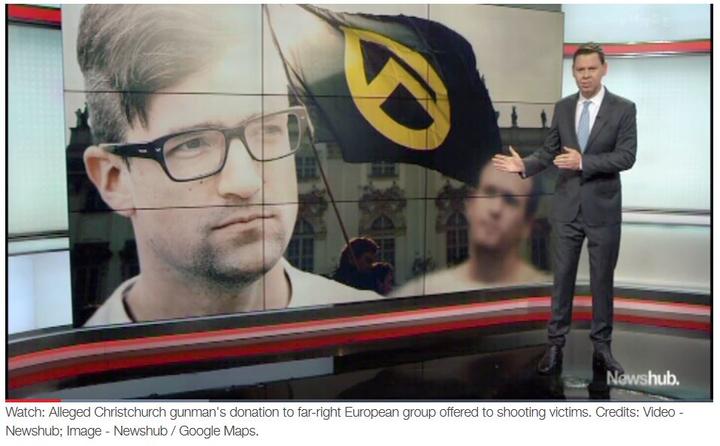 So where did Duncan Garner get the idea that this radical right-winger - who received a donation from the alleged Christchurch gunman - was a deeply conservative activist whose views would be considered acceptable by many people?

Most likely from his appearance on Newshub at 6 the night before. Garner was interviewing Newhub's national correspondent Patrick Gower about the latest installment of his Because it Matters series when he made the comment.

Martin Sellner figured prominently in the report which revealed right-wing protesters had called for the death of deputy prime minister Winston Peters at a protest against the UN Migration Pact held in Christchurch earlier this year.

Patrick Gower told Duncan Garner he had come in for some flak for interviewing Martin Sellner.

"There are people out there who are concerned we're giving this guy a platform. Look at the end of the day he's got a platform. It's called Youtube, it's called Facebook, it's called Twitter. He's got a massive platform. What I am doing is highlighting the influence he has on New Zealand politics going all the way to the National Party."

Patrick Gower said Sellner was a hipster with an acceptable face that came across well but was "quite frankly evil."

Strong words. But with Duncan Garner repeatedly saying how reasonably Martin Sellner came across, Patrick Gower’s two-part investigation clearly failed to convey, to some at least, just how toxic the far-right activist’s views are.

Writing in the Washington Post last May Anne Applebaum said: "Sellner represents a curious phenomenon in European politics: the far-right middleman. Unlike the neo-Nazis of old, the Identitarians don’t wear jackboots, don’t shave their heads, don’t lurk in the shadows. They have slick websites, professional videos and formal organizations."

And that slickness and professional approach requires journalists to provide context and background if their reports are to be anything more than a megaphone for carefully crafted far right talking points.

"Sellner is the leader of Austria's identitarian movement - Generation Identity. They believe in 'the great replacement'; European culture disappearing under a wave of Muslim immigration," he said.

Gower seemed to assume that his viewers would be aware of just how racist and ridiculous 'the great replacement' theory is; that they would know - for example - that Austria’s Muslim community, many of whom are native born, makes up less than 8 percent of the population. In Vienna it’s around 10 percent – the same percentage as the Jewish population before the Nazi genocide which saw the population slashed to just 800.

Patrick Gower is keenly aware of the need to take right wing extremists seriously. Back in May he went on Three’s The Project and made a public apology for having treated them as a joke in the past.

He took himself to task for his own lack of preparation when he did tackle the topic in an interview with Canadian far-right provocateurs Lauren Southern and Stefan Molyneux. 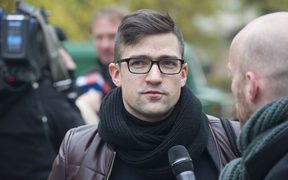 It seems a safe bet that most of his viewers are still in the dark when it comes to what those terms mean. And once again a far-right provocateur will be feeling pleased with the added exposure they’ve received on a national news outlet in New Zealand.

On Tuesday RNZ’s Morning Report also ran an interview with Martin Sellner-and again the far-right leader grabbed the opportunity to paint himself as a peace-loving activist.

"You always say with an Islamic attack: 'We now need to give a voice and platform to peaceful Muslims'. So now you should give a voice to peaceful patriots who are fighting the great replacement in a peaceful and political way," Sellner said.

And comments like this one went largely unchallenged: "What we don't want is to become a minority in our own lands. We don't want an Islamisation of Europe and we want to achieve this with peaceful methods."

The idea that Austrians will become a minority in their own land is absurd. But with no figures or facts listeners could be forgiven for thinking Austria is being over-run by hordes of foreigners.

For the record about 16 percent of Austrians were born outside its borders compared to more than 25 percent of New Zealanders.

The Morning Report interview isn’t available on RNZ’s website and Mediawatch was told that’s because of legal concerns about how the alleged gunman was referred to during the interview.

On Tuesday Newshub journalist Sophie Bateman wrote a web article under the title: Martin Sellner: A history of ‘non-violent’ violence in which she outlined some of Sellner’s objectionable behaviour and explained why he had been permanently banned from entering the UK.

But only a fraction of those who heard Martin Sellner on Newshub at 6 or RNZ’s Morning Report interview will have read her excellent piece of work. And that’s a pity because without that sort of background anyone listening to those two interviews could be left thinking the far-right activist is just a very "conservative" man with a commitment to peaceful activism.

So why was Martin Sellner interviewed by Newshub and RNZ now when news of him receiving a donation from the alleged gunman was first reported internationally way back in March?

RNZ’s news peg was that he had returned the donation to Victim Support in New Zealand and a charity in Syria and Newshub introduced its two-part investigation like this:

"Tonight we can reveal police are investigating death threats made by a notorious white supremacist against Winston Peters. And the deputy prime minister is blaming it on a fake news campaign be neo-Nazis in Europe."

Newshub went on to screen some disturbing video from a rally protesting the UN Migration Pact held in Christchurch prior to the mosque massacre.

Deputy prime minister Winston Peters was then quoted as saying it was not just far right groups in New Zealand who should be held accountable for ramping up the rhetoric and anger against the UN Migration Pact, but the National Party as well.

The report then featured a piece of historical footage of National Party leader Simon Bridges saying the UN Pact would cede New Zealand sovereignty to the UN on migration followed by a clip of Martin Sellner saying Bridges is on the right track and the 'silent majority is on his side."

And Patrick Gower concluded: "Martin Sellner having quite the impact."

There are legitimate questions to be asked about National’s stance on the UN Migration Pact but to suggest that Martin Sellner has played puppet master and is responsible for that stance is a stretch.

The next day, Patrick Gower went even further. "Now my question is this: Why has the National Party adopted the same policy as what was written on the alleged Christchurch gunman's gun?"

Asking the National Party to justify its stance on the pact is fair enough – framing it like that isn’t.

On Wednesday the Stuff newspapers ran an editorial under the title Drop the hate, not the debate in which they explored the minefield National finds itself in as a result of joining Australia, the USA – and the alleged gunman and alt-right conspiracists – in opposing the UN Migration Pact.

It concluded: "Our politicians can show a great deal of leadership in helping us plot our own path through the minefield, by continuing to honour the democracy of debate, and applying just enough weight to inform, rather than inflate.

Good advice not just for politicians but journalists and news editors too.