The pressure’s on for consistent cancer care around the country. Experts say that will take more than just more money for medicines but that’s become the focus of much of the coverage and comment in the media. 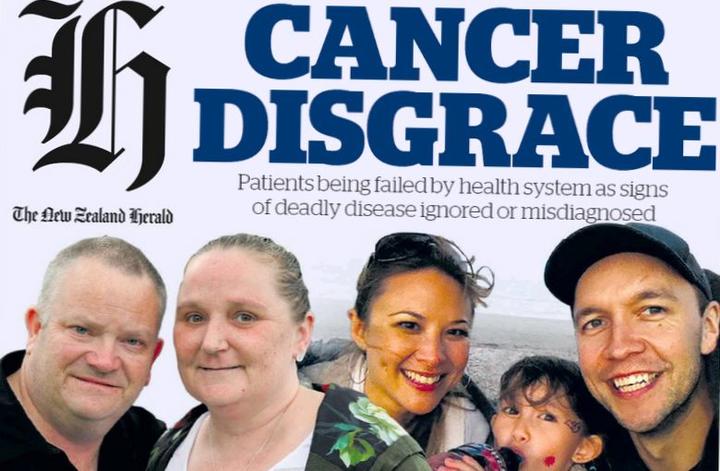 Even before the first episode screened, TVNZ’s new show How Not to Get Cancer annoyed Troy Elliott, whose wife Tracey has stage four breast cancer.

He told RNZ’s First Up many people had boycotted it because the show's title was "offensive" to cancer sufferers.

Episode one - which was all about diet - made it clear anyone can get the disease and no-one should be blamed, but TVNZ apologised for “unintentional upset” caused.

Upcoming episodes will examine lifestyle and our environment - and just one will be about medicine and treatment.

But that’s been the firm focus of much of the news coverage of cancer in the news lately - along with those who have to live with it.

The family of terminally-ill Southland man Blair Vining has been paying a fortune for cancer medication not funded by national drug-buying agency Pharmac or his own private health insurance.

He's spending the last weeks of life running a widely-reported campaign for consistent cancer care across the country and started a petition to parliament calling for a national cancer agency.

He's not the only one calling for change.

This week ZB's Mike Hosking claimed the government "lacks the gonads to actually pull the trigger" and take cancer care funding out of the hands of DHBs. The same morning on the AM show Duncan Garner was equally scathing of the status quo.

“Southern DHB oncologist Chris Jackson has been advocating for a national cancer agency, funded by the Government but acting independently - like Pharmac does - to improve the system.” said the New Zealand Herald in a recent special series called Cancer:Why Can’t We Get it Right? 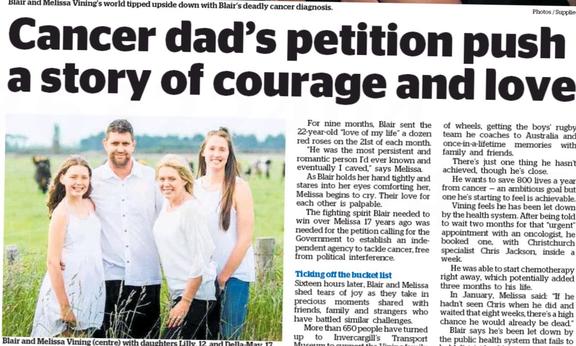 But in a lot of media coverage lately the government’s drug-buying agency has been cited as part of the problem, not the solution.

Last month RNZ ran a four-part investigation into how Pharmac works and whether its model is costing lives.

Guyon Espiner looked at Pharmac ranking medicines it might fund but - frustratingly for patients - keeps secret to try and cut better deals with drug makers. And the waiting can take years.

The limited availability of the latest life-extending but costly cancer drugs was also a focus of the series.

“Treatment for cancer isn’t all about medicines, it’s about screening, it’s about diagnosis. The most effective things to manage cancer are screening, diagnosis, radiotherapy, and surgery. Medicines are about eight to ten percent of cancer control," Pharmac's chief executive Sarah Fitt told Guyon Espiner.

"Yeah, but they can buy you years though, can’t they?" he asked.

"Some can, some can’t. And that’s what we have to work out. We funded other medicines in the meantime," Sarah Fitt replied.

The personal stories of sufferers denied drugs that are funded by the state in comparable countries were also to the fore in that series - and again two weeks later in another RNZ series: Life or Death under Pharmac.

Troy Elliot kicked off a series of a dozen on-camera monologues by people who want to see life extending drugs funded by Pharmac, describing the care here as "third world". Rae Collins - who has advanced lung cancer -  aired her grievances for First Up in a poem.

The distress of these people and their feelings about Pharmac and funding were pretty clear but while some were specific about the cost of their treatments, only a few were forthcoming about how much time and quality of life the treatments might offer.

Last Tuesday, Guyon Espiner returned to the story on RNZ’s Checkpoint interviewing the CEO of the National Institute for Health and Care Excellence (NICE), the agency which decides which cancer drugs are available for the UK.

Sir Andrew was visiting as a guest of Medicines New Zealand, which represents drug companies and lobbies the government here to spend more on their products. (MNZ also sponsors content on major news websites often through the stories of individuals including SMA sufferer Fiona Tolic who also told her story to RNZ’s Life or Death under Pharmac).

“We like to say yes,” RNZ said in the headline of its web story about NICE, while Pharmac by contrast has been portrayed across the media as unwilling to say yes to the same treatments.

But NICE can afford to say yes thanks to the UK’s Cancer Drugs Fund established in 2011.

This allows for speedy funding of expensive cancer drugs before clinical data confirms their full effectiveness. The fund was promised by the UK's Conservative Party during an election campaign in 2010 and tweaked two years ago to fast-track promising new drugs.

"That model – before first getting right the delivery of early screening and detection programmes and acknowledging surgery, chemotherapy and radiotherapy as still the first line of defence – would be to thoroughly ignore the issue of cancer inequity in New Zealand," Stuff political reporter Stacey Kirk wrote this weekend.

There has been criticism in the media and medical journals.

In December 2014 The Financial Times called the fund "a populist gesture that gives the impression of benefiting patients, but in fact rewards poor quality drugs while benefiting a handful of pharmaceutical companies at the expense of the taxpayer and the full range of patients."

In 2017 the Annals of Oncology journal concluded only 18 of the drugs approved for 47 treatments prolonged the patient’s life, and then only by an average of three months.

But when the UK’s Royal Society of Medicine analysed five years of national news reports last year it found they were overwhelmingly approving of the Cancer Drugs Fund.

"Access at any cost was a clear totem around which the pro-Fund media based its coverage. The views of experts who pointed out the intrinsic unfairness of the Fund  - or the lack of efficacy of many of the drugs - seem to have counted for little against the human interest stories of individual patients," the report said.

If concluded that “mostly positive media stories are likely to have contributed to the CDF's continuation despite mounting evidence of its ineffectiveness”.

Critics of the fund were "lone voices in the wilderness”, it said

That study was commissioned by Richard Sullivan, Professor of cancer and global health at Kings College London, who advises other countries in cancer care regimes.

In 2017 he said the UK's CDF had been a "huge waste of money" and a "major policy error" before NICE took over responsibility for it in 2016. 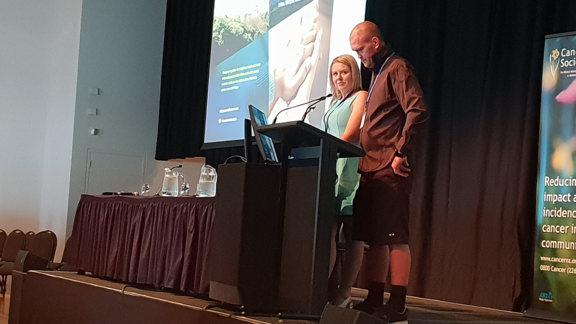 He was in New Zealand at a major cancer conference in February, which was addressed by Blair Vining.

"You have to put in place really strong mechanisms in your country to control prices and negotiate good prices," Professor Sullivan told Kim Hill on RNZ National.

"Countries and people are being asked to pay a great deal of money for the unknown and a lot of that unknown doesn't pan out. When we look backwards over sort of two or three years we discover the drugs actually don't work," he said.

"if you have cancer, prepare to die because New Zealand sucks," Duncan Garner said in his Stuff newspaper column this weekend, calling for a "nuclear reaction" from the public.

But while critics claim access to advanced drugs here is “third world,” our cancer survival rates are not.

The major international CONCORD-3 study found New Zealand was in the top five countries in the world last year for survival rates from common cancers - unlike the UK. 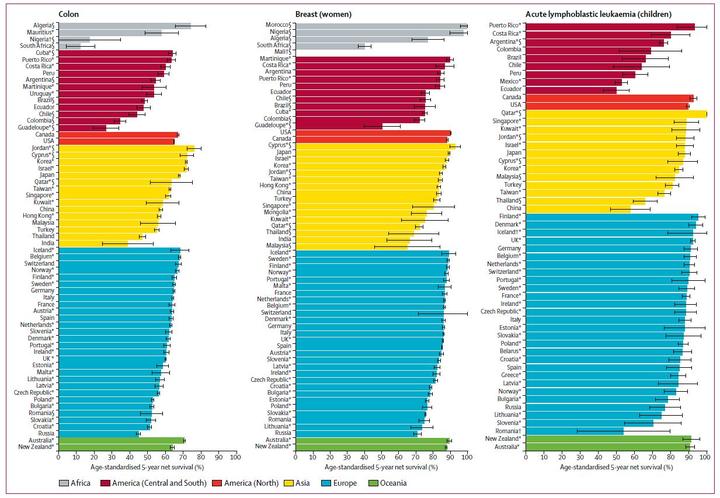 The way Pharmac withholds information on its decision-making is a legitimate topic for investigation. Likewise, whether Pharmac is incentivised to create surpluses it can use down the track rather than meet the needs of people suffering now.

And New Zealanders should know more than 500 people are fundraising online to cover costs of non-funded treatment right now, as RNZ's Guyon Espiner discovered, when many of them are available from the state in comparable countries which spend more on new medicines.

Our government has acknowledged a consistent standard of care around the country is urgent, and a national agency is part of the plan.

The media have amplified patients' and advocates' calls for reform of Pharmac and for more money for the drugs on its list and new treatments in the pipeline.

But a national cancer agency that’s independent and free from political influence - as Blair Vining and oncologists alike demand - could still come to the conclusion more money for new drugs isn’t necessarily the way to go.