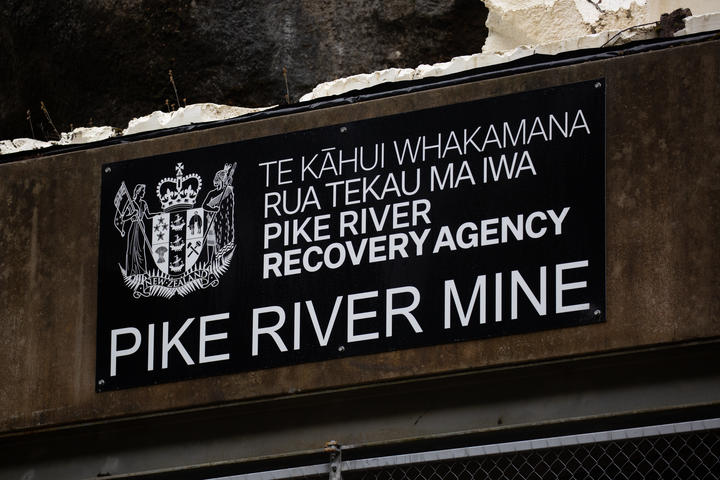 A sign for the recovery agency above the entry to Pike River Mine, on the day of first re-entry. Photo: Pike River Recovery Agency / Supplied

The re-entry of the Pike River mine this week was an historic event but there were no media there to record it because the families of the 29 men who died in the disaster didn't want them there. Mediawatch takes a look at some recent research that suggest families felt  ‘violated’ by journalists coverage.

Last Tuesday, Anna Osborne - the wife of Milton Osborne, who died in the tragedy - told TVNZ Breakfast host John Campbell the families asked for the mine re-entry to be media free in order to have some "time".

Later that day family members made themselves available for interviews but it was on their own terms. The media seemed to have accepted that the families of the 29 men who died at Pike River had a right to dictate the terms on which they engaged with media.

Newstalk ZB’s political editor Barry Soper in a New Zealand Herald column did ask whether “the media, and more particularly the public, were being short changed?”

He said it was frustrating because, “the only wrong step made by the media in all of this time was when some Australian yobbo questioned the credentials of the cop handling the explosion's immediate aftermath.”

But he concluded, in the end, the wishes of the families had to be respected.

So, was Soper right to say a single rogue Aussie scribbler was responsible for upsetting the miners’ families?

Not according to Victoria University professors of law Yvette Tinsley and Nichole Moreham.

In The impact of grief journalism on its subjects: lessons from the Pike River mining disaster, published earlier this year, the two professors wrote: "A large number of journalists would approach people in their homes both in person and by telephone, sometimes using deception or dirty tricks to gain access.

"Family members were also approached, followed, and/or photographed when they went out and material on them or their deceased loved ones would appear in the media without their knowledge or consent."

The pair spoke to 17 family members of the men killed in the mine disaster who said that the intense media attention made things worse for them and made them feel "invaded," "scared," "overwhelmed," and "violated."

The article, published in The Journal of Media Law, includes direct quotes from the family members clearly illustrating that the distress was caused by numerous different reporters and photographers.

One family member told the researchers: "We couldn’t even get off of our bus…the media were right up against the door of the bus and the police had to come and move people away and then they only removed them enough for just basically a person to make a tunnel between the bus and the Pike River building in town.

"All you could see was microphones and cameras… It was the worst experience."

And man said: "We just didn’t want our picture taken because we were all upset; we were visibly crying. Just private time that was our area and we wanted to be left alone…I’ve seen my photo in the papers and the television a hell of a lot, which we didn’t want. I thought how did these crooks get that?"

And another said: "You show them any emotion and then the camera’s there and guarantee you’ll they’ll get a shot…If you’re crying, you’re grieving, it’s a good story, there’s a good photo in that."

Prof Tinsley and Prof Moreham noted some of those interviewed had positive things to say about individual journalists.

One spoke of a female journalist who left a note that said: "'I know where you’re coming from because I lost my grandfather in a mine.' I actually rang her back and I said, 'When I feel like talking to you, I’ll talk to you.' And she said, 'Look hey…take your time. I’m in no hurry.'

"That’s people that you relate to."

But the professors concluded their paper by saying the behaviour of journalists made an already extremely difficult situation significantly worse.

"On a practical level, this interfered with family members’ ability to communicate with one another, to access practical and emotional support, and to engage with their communities. On an emotional level, it undermined their sense of dignity, safety, security, and autonomy at a time of great vulnerability."

The pair are in the process of formulating recommendations for how the media could avoid compounding the grief of those caught up in disasters and whether there’s any need for changes in the law.