Sitting on a sensational story for safety’s sake

For five years our news media kept the story of kidnapped nurse Louisa Akavi under wraps and this week they won praise for putting her safety ahead of a scoop. But the last time this happened, the media’s ethics didn’t quite come out so squeaky clean in the wash-up. 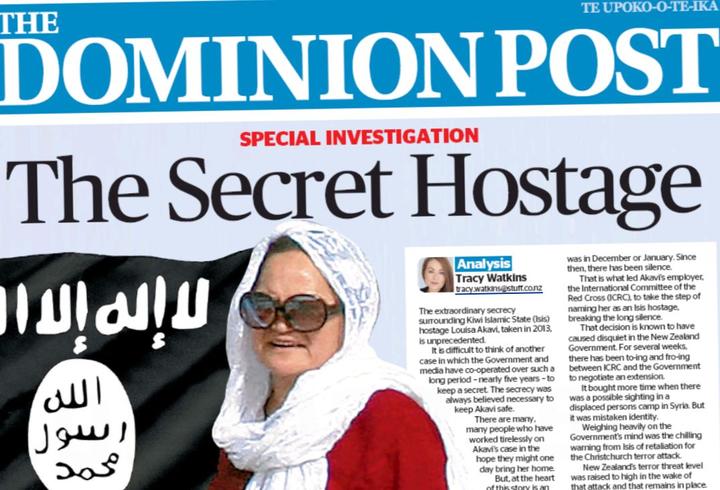 The International Committee of the Red Cross revealed Lousia Akavi's name and her story last Monday and the New York Times was first to publish it.

It took our media by surprise when the story broke on Monday - but they were not caught unawares.

Stuff told readers it learned about her back in September 2014  - and how she ended up in the hands of Isis with a group of hostages including US journalists James Foley and Steven Sotloff, whose grisly beheadings later shocked the world.

Stuff said it agreed not to report on Louisa because it might boost her propaganda value to Isis and increase the likelihood of another execution.

Mediawatch stumbled across some of these recently while looking into stories about so-called Kiwi Jihadis taking part in the conflicts in Iraq and Syria.

Once her name became public the media here had a wave of stories ready to roll out online, on air and in print.

"There will be a time later for questions about the government's five-year long silence on Akavi – and also the part journalists such as myself played in that," said Stuff's political editor Tracy Watkins in a front-page piece explaining the secrecy.

She even traveled to the US to interview the parents of a fellow captive - Kayla Mueller - who was killed.

It was political editors like Tracy Watkins who wrote the big reveals on Monday because the media agreed with government to keep Louisa Akavi’s name and her story under wraps for her own safety: 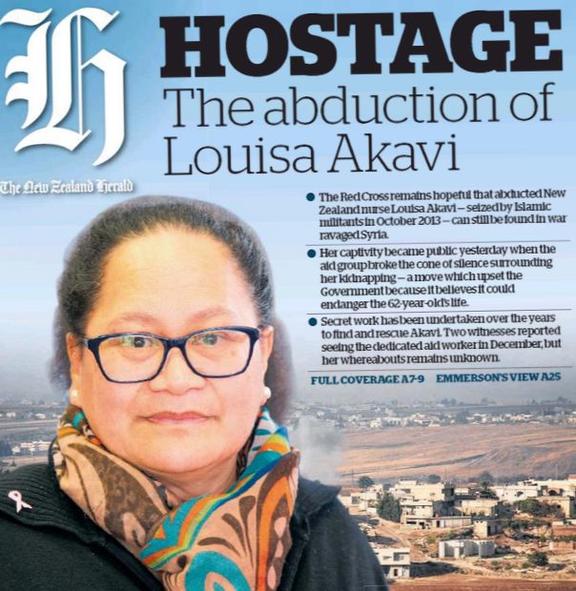 "This was not an unusual agreement. Media around the world had accepted similar conditions around the other hostages because of the extreme risk of publicising their plights," Stuff told its readers in an editorial.

"It was known that Isis had warned the families of hostages not to go to the media or their loved ones would be killed," said Stuff.

Our media have pilloried in the past for publishing the names of New Zealanders at risk in conflict zones.

Stories in 2010 naming and depicting SAS soldier Willie Apiata in Afghanistan drew criticism from the PM John Key and the New Zealand Defence Force - even though the former also named him publicly and the latter had already published images of him online.

This week, politicians and pundits alike praised the media for sitting on Louisa's story.

But he didn't back her opposition to the ICRC releasing Louisa Akavi's name in the first place, and on Newstalk ZB he said officials here appeared to have a different policy for The New York Times.

"It seems our government officials were happy to speak to the New York Times so there's a bit of duplicity going on there I think," he said.

Putting the protocols in play

Barry Soper said he couldn’t recall a similar case of New Zealand media sitting on a story for the sake of someone's safety in a warzone, but it has happened before.

Back in 2005, Harmeet Sooden - who was also a citizen of Canada - was taken hostage in Iraq along with other peace activist from the US and the UK.

They were rescued by British special forces in March 2006, and only then did the media report Harmeet Sooden once worked as a software engineer for a US-owned company based in Auckland that manufactured defence equipment.

The company had tried to strike a deal with the Israeli Defence Force - a detail leaked by Mr Sooden himself.

Fearing this revelation could jeopardise his life, the government used the Terrorist Event Media Protocols.

This was a set of principles set out by the government for the media in the event of a either a terrorist emergency within New Zealand - or a significant terrorist event overseas involving New Zealanders.

The protocols were first employed during a foot and mouth scare in 2005 which turned out to be a malicious hoax.

Whether to publish or not was still up to the editors but it raised two key questions: should the government have any role in influencing the editorial choices of a media outlet? And could the media be trusted not to publish information likely to put lives at risk?

The media did not publish the risky revelation about Mr Sooden in 2005 but the media response was called into question afterwards.

The Ministry of Foreign Affairs and Trade released a statement which said Mr Sooden’s family in Auckland had been swamped with media requests and would deal only with TVNZ.

TVNZ arranged business class travel for two members of his family to pick up Mr Sooden in Dubai and bring him home after a short hotel stay.

That kicked off a row that dragged in the media, MFAT and the PM Helen Clark who criticised "chequebook journalism".

The head of news at TV3 back then  - Mark Jennings  - agreed.

One year earlier a NZ Listener article about chequebook journalism quoted him as saying this:

"Once you start producing the chequebook the whole quality of journalism goes through the floor.  When you start paying someone, it's a bit like paying for witness testimony. Are they giving you the truth or what you want to hear?"

Other media were also annoyed that the state-owned broadcaster tried to get an exclusive interview with the former captive with what looked like approval and assistance of MFAT.

But in the end it wasn't money well spent by TVNZ.

Harmeet Sooden himself decided he would speak to all media in an open press conference when he got back.

Family members who brokered the deal with TVNZ here then claimed pressure from Canada had collapsed it. In Parliament the National Party claimed Canadian media put pressure on foreign minister Winston Peters and MFAT.

An ugly squabble all round.

These days the commercial rivalries in TV news are not as acute. It’s unlikely any mainstream news organisation would spend as much money to scoop rivals on such a story.

But the flood of coverage about Louisa Akavi this past week shows there’s still huge interest in her.

"Like her family, the ICRC, the government and many people who worked on Akavi's story, we always hoped the ending once the story broke would be a happy one," said the Dominion Post in an editorial this week.

If she is found alive, let’s hope the media show the same interest in her wellbeing as they have these past five years by keeping her story a secret.