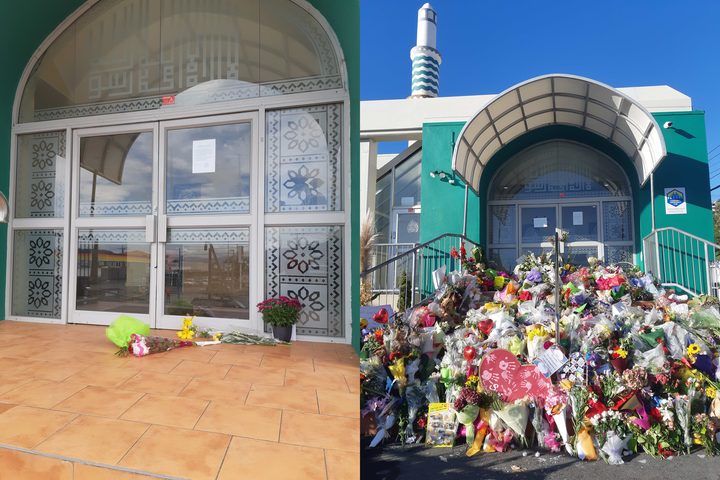 In 2017 the New Zealand media featured 14,349 stories that included the word Islam - nearly 13,000 of those stories mentioned either terrorism or Islamic Jihad.

The stats are from an academic article by Khairiah Rahman and Azadeh Emadi: Representations of Islam and Muslims in New Zealand Media.

The pair wrote that the paper was necessary because: “there appears to be a growing misconceived hatred for a faith supported by 1.5 billion of the world’s population, but more importantly, this destructive trend is promoted by the media, consciously or not, and has the potential to ultimately cause an unnecessary and irreparable rift in civil society.”

And they wrote: “The media can rectify their misrepresentations of Muslims by adopting intercultural dialogue. The outcome would present a holistic story that uses the voices of those involved respectfully.”

In the days since the mass murder at the mosques in Christchurch Muslim voices are finally being heard.  It’s beyond tragic that it’s taken an act of such murderous evil to bring that about.

If there’s been a unifying theme among many of the op-eds published in recent days it’s that as shocking as the white supremacist attack was – it wasn’t surprising to Muslims.

Waleed Aly, a co-host of the Australian version of The Project, began last Friday’s programme with an editorial. He said:

“Of all the things I could say tonight, that I'm gutted and I'm scared and I feel overcome with utter hopelessness, the most dishonest thing, the most dishonest thing would be to say that I'm shocked. I'm simply not. There's nothing about what happened in Christchurch today that shocked me. I wasn't shocked when six people were shot to death at a mosque in Quebec City two years ago. I wasn't shocked when a man drove a van into Finsbury Park mosque in London about six months later and I wasn't shocked when 11 Jews were shot dead in a Pittsburgh synagogue late last year or when nine Christians were killed at a church in Charleston. If we're honest, we'll know this has been coming”

The video has been shared 12 million times and seen prime minister Scott Morrison threaten Network 10 with a defamation case.

Writing on the Vice website lawyer and chairperson of the Khadija Leadership Network Pakeeza Rasheed wrote:

“I am sad that this happened but I am equally angry that little had been done to address the issues leading up to this event. As Muslims we have been told our anger is dangerous, our anger is unacceptable. … For so long we have been told to be quiet, to be invisible, to know our place and apologise for our very existence. To be grateful that we were allowed to be a part of a utopian paradise. But let’s not fool ourselves. We have never really been a part of New Zealand. We have merely been allowed to exist—never embraced, never included, never accepted. Muslims have been in New Zealand since the 1800s but we are still treated as outsiders.”

"Islamophobia: you cannot tackle it if you don’t acknowledge it exists. Let’s face it; we ignored it. We chose to look away. We chose to refuse to acknowledge that Islamophobia is a problem in New Zealand. It’s a hard pill to swallow, I know - especially now that most of us feel so devastated by the news and feel so shocked that such an evil act can happen in a country full of love and tolerance. But to many Muslims, especially hijabi Muslim women, the hate that gave rise to this evil act is not entirely unfamiliar."

And she noted: "An informal survey of 100 young Muslim women conducted by the Islamic Women Council of New Zealand (IWCNZ) showed 80 percent were harassed or discriminated within the previous year."

"Muslims have been dehumanised and demonised in the media the world over since 9/11. The failure to include Muslim voices in this narrative has left unchallenged the stereotypes painted of us, as if we are a two-dimensional monolith, a single monstrous Other.

And she had some suggestions…

"Share on social media the commentary from Muslims who are sharing their thoughts and experiences and if you are white then share the immense platform you are often privileged to occupy." 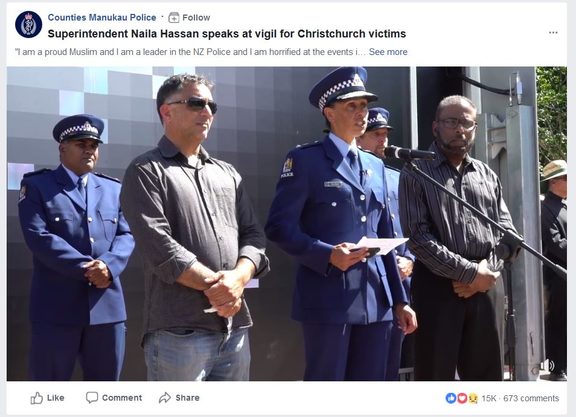 In a profile of Inspector Hassan published by Stuff last year she revealed that it had taken her 20 years to admit to her colleagues she was Muslim - clearly it's not just the media that at times has felt less than welcoming to Muslim views.

Green MP Chloe Swarbrick used her Facebook page to let her friend Mukseet to tell his story. The post has been shared 10,000 times.

Mukseet writes candidly about growing up in a racist country and then shares this anecdote: .

“I watched my mum bursting with pride as she recounted to my aunty in Bangladesh the story of how she went for a walk this morning, and a white woman came up to her, greeted her as a friend, took her hands and said ‘I’m so sorry for your loss’."

He continued: "Your messages mean a lot. Your support means a lot. They have brought me to tears, helped to keep me grounded, and brought me back from some really dark places. But if I’m to be honest; they’re not enough. Action is so much harder than apathy. But look where apathy and complacency got us."

“In these times when hate and bigotry no longer have to hide in the shadows; listen to minorities, talk to those around you, if you hear someone spouting hate, call that shit out.”

Dr Anwar Ghani of the Federation of Islamic Societies was asked on TVNZ's Marae on Sunday about that lack of surprise at the attacks but he had other things he wanted to say first:

"This particular mosque at Deans Avenue was a place for shelter when we had the earthquakes and they used to serve meal to three to four hundred people every day. And the community made a point of going the provide at least whatever they could. That was their sense of doing community good."

And then Dr Ghani answered the question about why the attack hadn't come as a complete surprise to Muslims.

"While we are not surprised but we are certainly shocked that it could happen at this level, this magnitude. We are lost for words. We also know that New Zealand stands together. We have seen at the vigil in Hamilton - such a small community but six seven thousand people came and showed solidarity.".

One of the biggest challenges coming up for the media is how to deal with the upcoming trial of the man responsible this crime. Anjum Rahman, of the Islamic Woman’s Council, was asked on TVNZ’s Q and A and programme about the accused mass murderer's plan to represent himself in court.

She replied that he would represent himself and like all New Zealanders he had that right but the media had a responsibility not to report everything just for the sake of it. "I would be asking all media to show extreme restraint in terms of which of his messages they choose to put out to the public. Don't let him play the game."

If Anjum Rahman was looking forward to the media reporting responsibility, the Spinoff's Duncan Grieve was looking at how the media was handling some of its less edifying efforts from the past. In an article titled: 'The quiet deletion of the Islamophobic archives,' Grieves pointed out that a photo Newstalk ZB's Mike Hosking holding up a tee-shirt with the Okay symbol that is popular with white supremacists had been removed (Hosking has said he was unaware of the symbol's associations with the alt-right); and that an article by fellow ZB host Chris Lynch that asked "Does Islam have any place in public swimming pools?" had also been removed.

Mediawatch hasn't read the the scrubbed op-ed but presumably it objected to women only hours - often popular with non Muslim women as well - on the grounds it was buckling to Islamic demands.

This week Lynch made an on air apology.

Newsroom's Thomas Coughlan took a look at the recent history of politicians criticising Islam and Muslim immigration to New Zealand. (He spoke to Bryan Crump about it on Monday night on Lately.)

Coughlan's list was far from comprehensive. In 2002 Richard Prebble – then the leader of the ACT Party - warned of the dangers of people from desert cultures and advocated taking in white farmers from Southern Africa instead – who he described as real refugees.

The comments barely rated a mention with Scoop and Australia's Green Left Weekly being the only places online with articles mentioning the press release.

And in his self-published 2014 autobiography Don Brash dedicated a whole chapter to the question fundamentalist religion.

Most of the chapter is made of article that Brash wrote while he was the leader of the National Party but was never published because his colleagues at the time warned him that it would confirm people’s impression that he was a racist.

In it he quotes approvingly from a paper by a former Australian Treasury secretary  - "not some kind of extreme right-wing nutter," according to Brash - which advocated bringing Muslim immigration to a virtual halt because, he claimed, Islam was a culture that "for the past 500 years or so failed its adherents as its inward-looking theocracy has resulted in it falling further and further behind the West".

Brash's book was the subject of quite a few interviews but as far as Mediawatch is aware his support for massively restricting Muslim immigration didn't rate a mention.

A number of the Muslim op ed pieces mentioned above made the point that there was nothing new about white supremacy in New Zealand and made explicitly linked Islamophobia to the country's colonial history.

That point was hammered home in a by Dame Anne Salmond in a New Zealand op ed. It’s headline was: Racist underbelly seethes just beneath the surface.

It begins: "After this terrible tragedy, let's be honest, for once. White supremacy is a part of us, a dark power in the land. In its soft version, it looks bland and reasonable."

And the sociologist and author Scott Hamilton wrote a piece on the Spinoff titled: The Land of the Long White Stain.

He describes the racist killing of a disabled Chinese man Joe Kum Yung – and how 3000 New Zealanders signed a petition calling for his his killer to be released.

Scott traces anti-Muslim policies back to the 1896 Undesirable Hawkers Act – that was aimed at recent Middle Eastern immigrants. William Pember Reeves – who is remembered as leading progressive of his day - said: "The so-called Assyrian hawker is as undesirable as Johnny Chinaman himself … They do not lead sanitary lives. They are not a moral people. They are not a civilised people, and in no sense are they a desirable people”.

Counter terrorism expert Dr Asim Quresh, writing on the Spinoff, also argues that New Zealanders need to look at the country's white supremacist past if they are to understand the present.

"Ultimately, if New Zealand hopes to have any chance of recovery from what it has suffered, then it must first seriously confront its own colonial history, and how that colonial violence continues to be excluded from the foundational myths of New Zealand as a tolerant society."