A recent visit by controversial Canadian author Jordan Peterson got lots of attention from the NZ media – even before he arrived and spoke here.

But not much that preceded Peterson's visit helped to explain his notoriety, and once he was here the media made us wait to find out what he had actually said in public. 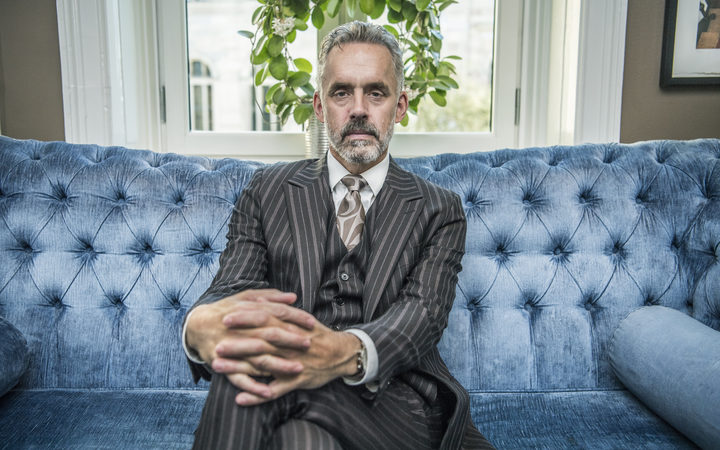 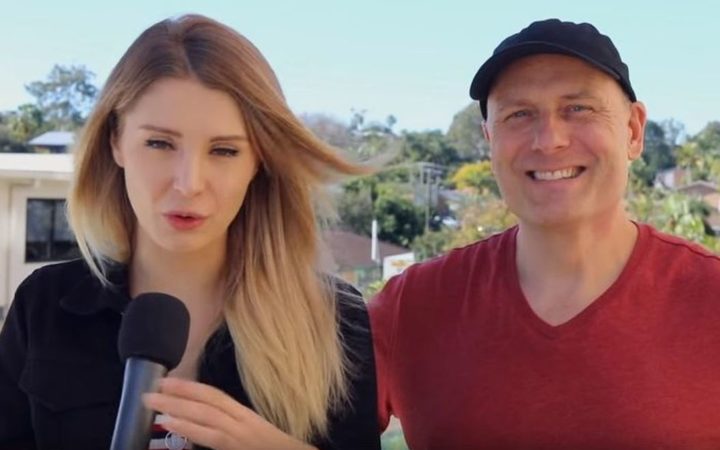 Last year, two other Canadians with controversial and inflammatory views about race, gender and politics sparked a media storm here when they announced they were coming to perform.

Their potential visit led to a full-on row about freedom of speech.

Even before Lauren Southern and Stefan Molyneux set foot in the country the New Zealand media was full of details about what the two stirrers believed and what they were likely to say while they were here.

Last week, the pattern repeated – sort of – when Jordan Peterson confirmed he’d swing by for three shows here after a visit to Australia.

While Southern and Molyneux were previously virtually unknown here, Peterson – a psychology professor – already had a reputation thanks to his best-selling book 12 Rules for Life and dozens of media interviews, lectures and speeches on the internet.

One of the most viewed and shared Peterson interviews online is his January 2018 conversation with an exasperated Cathy Newman from the UK’s Channel 4.

Confrontational interviews like that one have boosted Peterson's standing with supporters, but the reaction of some is worrying.

Cathy Newman received so many threats she went to the police, she recalled in an interview later.

One local journalist said she also had a hostile response when she wrote about Peterson recently.

But for New Zealanders not aware of the full gamut of Jordan Peterson's theories – or why many people are so bothered by them – our media didn't help much.

Magic Talk radio host Sean Plunket is a fan of Peterson and did his bit by airing an interview via Skype last week.

In the end, that didn't spark as much reaction as his interview with a hapless representative from Auckland Peace Action (APA) which Newshub published online under the heading: 'Sean Plunket rips apart stunned activist'.

APA had claimed “Jordan Peterson threatens everything of value in our society”.

While APA’s Iris Krzyzosiak wasn’t well prepared for that interview, neither was commentator Shane Te Pou when he appeared on Three’s show The Project alongside Sean Plunket, who had become a kind of unofficial spokesperson for Peterson. 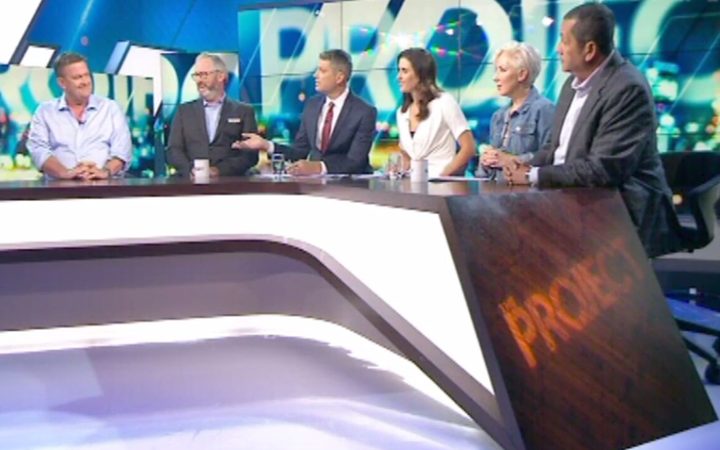 Sean Plunket sticks up for Jordan Peterson on The Project. Photo: screenshot / Three

“How good is he that we are talking about him this much and he’s not even here yet?” said The Project co-host Jeremy Corbett – without apparent irony, wrapping up a segment that shed little light on what Jordan Peterson believes.

“People say the life lessons in Dr Jordan Peterson's self-help style book can't be argued with,” said a backgrounder in the NZ Herald the same day.

“They include things like standing up straight with your shoulders back, making friends with those who want the best for you and not bothering children while they are skateboarding,” it said.

It was entertaining, but not enlightening for those wondering why the views of a psychology professor and author from Canada might be relevant to politics and modern life in New Zealand. 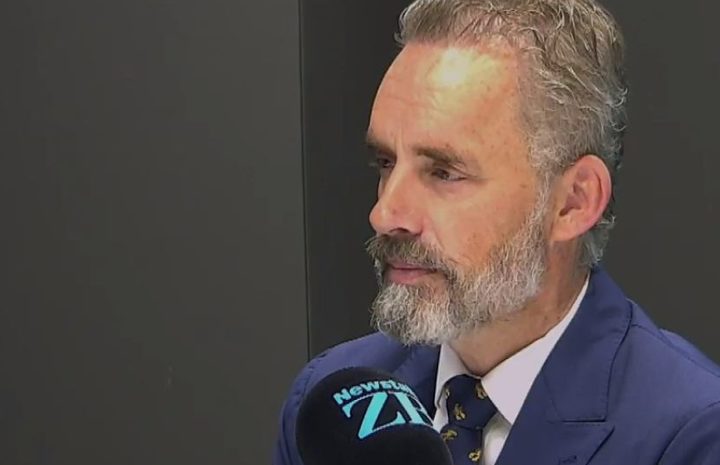 With Jordan Peterson’s arrival in the country imminent, Newstalk ZB was heavily trailing an interview with Mike Hosking host of TVNZ's Breakfast programme.

But at the same time, a talkback caller told her something that didn’t sound at all sensible.

Since late 2016, Jordan Peterson has reportedly been on a strict diet of only meat and selected vegetables in an effort to control what he has described as severe depression and auto-immune conditions.

He says he was inspired by his daughter Mikhaila Peterson, who writes in her blog Don't Eat That that a meat-only diet eased several of her severe medical complaints – and at the same time promotes a local meat delivery service.

Last year Jordan Peterson told podcaster and comedian Joe Rogan he stopped eating all vegetables in mid-2018 and since then was feeling much better.

It was “beyond his comprehension,” he told Rogan.

That idea flies in the face of most scientific wisdom on nutrition – not to mention the “common sense” and academic credentials his supporters hail.

Jordan Peterson has acknowledged some of his fans have followed his lead but says he doesn’t recommend a meat-only diet.

Not surprising given that his stock in trade is advice on how to live a better life.

On Newstalk ZB, Heather du Plessis-Allan wasn’t bothered by this.

“The vegans will be so upset that he only eats meat,” she told her listeners.

“They’ll be freaking out – the vegetarians, as well. For that reason alone I seem to like him,” she laughed.

On the night of Jordan Peterson's first talk in Auckland last week, the NZ Herald rushed out a breathless Live Focus video.

Peterson took the stage to Vivaldi’s 'Four Seasons' and welcomed the crowd – but there the video ended.

Cameras were moved out of the hall after four minutes, the reporter said.

NZ Herald online viewers wanting to know what Jordan Peterson said were disappointed, even after Herald journalist Simon Wilson did his own interview with Peterson.

The NZ Herald published part of this interview as “a quick and dirty story”, but held the full story back.

It was the fullest account of – and encounter with – Jordan Peterson in New Zealand, but those seeking a thorough examination of what this controversial figure was all about would have been frustrated that it appeared in print and online last weekend after the tour was over.

Curious viewers and listeners could see and hear Jordan Peterson interviewed earlier by Mike Hosking on Newstalk ZB (and Facebook) and on TVNZ’s Breakfast show the next day – but both those interviews were pretty lacklustre. 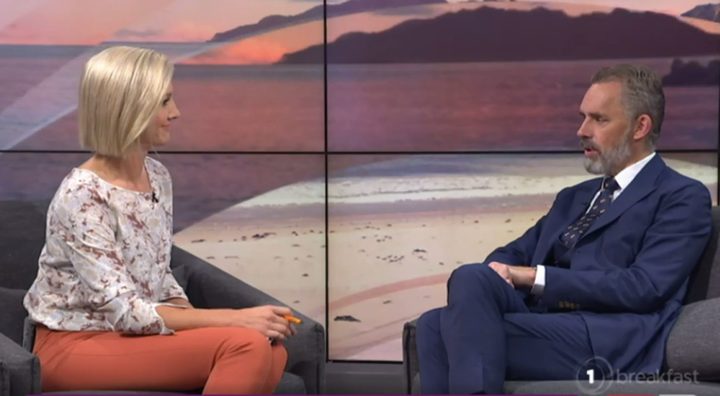 While the week began with many people wondering what all the Jordan Peterson fuss was about, Newstalk ZB’s Andrew Dickens felt the same way when the heavily-trailed tour got underway.

‘So Jordan Peterson has come to the country, sold out, talked to his disciples and harrumphed his way through a few interviews – and caused little or no upset, outrage or unrest,” he summed up in a piece headlined 'Jordan Peterson’s boring'.

“Many of his interviews now are not about what he thinks about life and his research, but what some crazy people have reacted to,” Dickens told his listeners.

And that is what the media, in turn, react to, leaving many among the audience still wondering why Jordan Peterson looms so large in the news wherever he goes.