The latest TV political poll was heavily hyped in-house as a “game changer” that could signal "game over" for National’s leader. Did other media follow Newshub's lead? 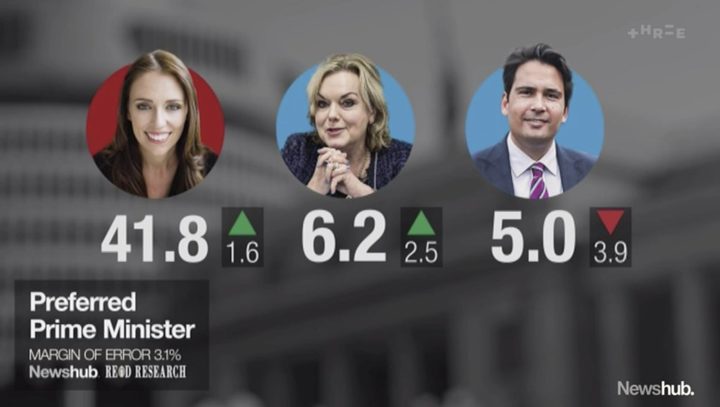 What's the real story revealed by these numbers? Photo: screenshot / Newshub at 6

Politicians sometimes contradict conclusions about their popularity in the polls by insisting their own private polling tells a different story.

When asked to prove it, they usually keep the secret stats close to their chest.

But when the media who have the numbers from a poll they’ve paid for, they only let us know the numbers when they’re ready.

On Monday, the night before MPs returned to Parliament for the year, Newshub at 6 released the results of its latest Reid Research poll carried out in late January.

“This is going to be huge” Newshub political editor Tova O’Brien said teasingly on on social media, deploying the hashtag #doozy

Two hours before the big reveal she went on the Drive show of sister radio station Magic Talk and said the poll results would be “a game changer . . . devastating for one party and its leader.”

Unless there had been a huge collapse in support for Jacinda Ardern and Labour, this was almost certainly going to be bad for National and SImon Bridges.

“Next to no-one wants him as PM”  said Newshub at 6 on Monday before Tova O’Brien revealed Judith Collins had overtaken Simon Bridges as preferred PM.

RNZ’s Checkpoint said the same after an in interview with the Papakura MP on Tuesday:

RNZ also over-reacted to a small shift in the survey. Photo: screenshot / rnz.co.nz

Neither of them were were preferred by many of the 1,000 people polled - 6.2 per cent and 5 per cent respectively.

The difference between them was margin-of-error stuff - literally fewer than a dozen people - and Newshub didn't mention the “ don't knows” and “don't cares”.

In Newshub’s own language “next to no-one” wants Judith Collins as PM either - according to the poll Newshub insists is ”the most accurate in New Zealand.”

Judith Collins rise in their poll was just one leg of what Tova O'Brien called “the trifecta from hell” for Bridges - a new variation on a very old theme of politics as an endless horse race.

“For the first time in the 12-year history of our Newshub Reid Research Poll National is behind Labour,” Newshub said of the 5 per cent fall in National Party support since last May.

Tova O’Brien said it was “historic” but the Colmar Brunton polls commissioned by rival TVNZ have showed National behind Labour twice within 18 months. 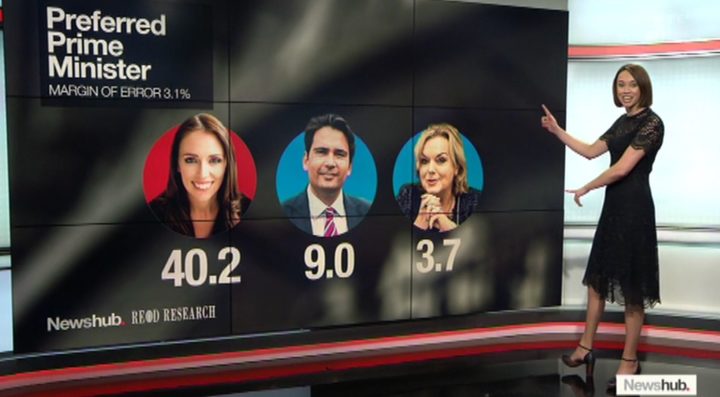 Other media were less excited by Newhub's poll.

The Herald’s political editor Audrey Young said it was “more dramatic in its presentation than in its results.”

“It may cause a murmur in National but it is not the sort of result that will throw the party into crisis or into a coup mentality,” she said.

She said National had fallen below Labour several times in the two parties' private polling and there no panic then either.

But Jacinda Ardern’s popularity was clear in both TV companies’ polls.

Tim Murphy, the co-editor of Newsroom - which didn't bother reporting the poll at all - reckoned the real significance was the continued support for the government.

That poll is pretty ordinary for National and Bridges but isn’t the rise and rise of Ardern’s Labour party vote- now at Key-era levels of 47% after taking over the leadership at 23% and getting elected with 36.9% an ongoing marvel?

Newshub’s rivals at TVNZ were only interested in Jami-Lee Ross on Tuesday.

But it wasn’t just Newshub that was galvanised by its own poll.

On RNZ’s Checkpoint Lisa Owen spent six futile minutes trying to get Judith Collins to say she wanted to be the leader.

She insisted she didn't want the job but some in the media really seem to want her to have it.

“The media have proclaimed Simon Bridges to be dog tucker. Having issued that decree, the media will do its darnedest to make sure he does become exactly that,” said former Herald political correspondent John Armstrong on TVNZ’s One News Now.

“It is unfair. Some pundits had made up their minds that Bridges was the wrong person to lead National within weeks of him securing the job,” he wrote.

When the National leadership was up for grabs last year, Mike Hosking urged National to “take Collins, and then take a seat - and watch the sparks fly."

So did Three’s Duncan Garner and two days before the last Newshub poll last year, Tova O’Brien called Judith Collins “the comeback queen” and said maybe National should have picked her as leader.

The day before Newshub unloaded the poll results this week, Simon Bridges did his normal Monday morning round of interviews.

He told the AM show National was prepping eight policy plans to release this year to show people it was a government in waiting.

People might want to hear about those policies, but it will be hard to drown out the noise the media make about his leadership.