A year ago at Waitangi the PM said “hold me to account when I return.“ 12 months later she got put on the spot about the basics of the Treaty. 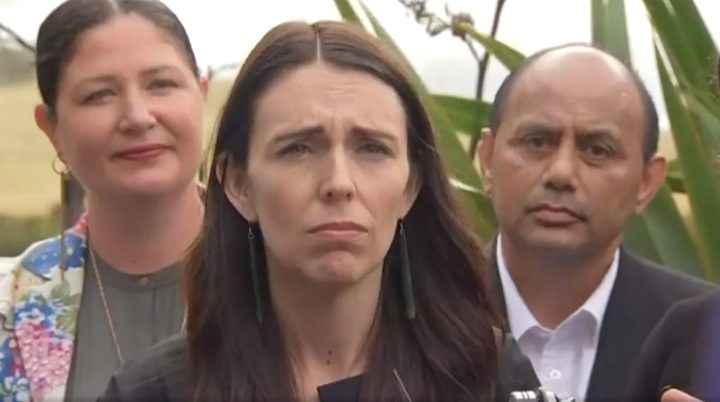 Don't ask her - ask him: The PM gets put on the spot by TVNZ's Maiki Sherman. Photo: screenshot / TVNZ1 News

When the Prime Minister said she expected to be held to account at Waitangi last year, she was talking about progress in Māori health, wealth and education and imprisonment.

Last Monday she was held to account on her knowledge of the Treaty itself.

TVNZ’s Maiki Sherman put her on the spot asking her to sum up Article 1 and 2.

The press pack’s microphones and cameras picked up associate minister of Māori development Willie Jackson prompting the hesitant PM with the key words.

“Look, I know the principles of Waitangi, I know our obligations," she told reporters.

Follow-up questions on that could have been revealing. Many Māori and politicians have very different ideas about that - and different interpretations of the texts of the two versions of the Treaty.

But instead the story became her stumbles and fumbles answering that curly question.

Later, a forewarned Simon Bridges stood up better when the same question was fired at him.

The fairness of putting the PM on the spot became a talkback topic and triggered the pundits.

“At the very least our schools should be teaching our kids to understand the contents of this relatively brief document so that when they grow up to be Prime Minister, they'll be the dinner guest worth listening to,” political editor Barry Soper wrote on Newstalkzb.co.nz.

It’s not the first time ‘gotcha’ questions have been turned into political news.

Before the last election Lisa Owen tripped up some candidates in economic policy debates by asking to state the inflation rate and unemployment rate.

In the past politicians have been asked out of the blue about the price of milk and cheese in the shops to test if they are in touch with ordinary life.

“The story here isn’t that the PM didn’t know what Article One says, and needed Willie to help her out. The story is the media doing a “gotcha” story where they treat politics as a quiz night,” National pollster David Farrar said on his site Kiwiblog.

MPs should refuse to play the media’s game, he reckoned.

But was this ‘gotcha’ opportunism  - yielding little more than footage of a politician squirming - or a really revealing and relevant moment?

Maiki Sherman had a genuine reason to pop the pop quiz question so soon after history teachers and teachers unions called to make colonial-era New Zealand history compulsory in our schools.

Editorials in the ODT and the Herald agreed this was an idea whose time had come. So did politicians from a range of parties.

That knowledge gap was the focus of Maiki Sherman's TVNZ 1 News report that night, in which she put other politicians on the spot including Green co-leader James Shaw and Labour’s Kelvin Davis.

And when it comes to media shorthand and shortcuts covering Waitangi, Maiki Sherman has a keen eye - as she proved in a pointed package she made this time last year for TVNZ’s Seven Sharp:

"If we're going to lead a country, we need to learn the articles of the Treaty of Waitangi," he said, during the Waitangi Day dawn service on Wednesday.

"There are some of us, leaders, who have slipped up on that, and all I ask is by this time next year that we all know the articles of the Treaty of Waitangi," he said.

The fallout from that was newsworthy too for urban Māori station Radio Waatea on Thursday which reported concerns his comments would not help progress towards a  settlement for Ngapuhi. 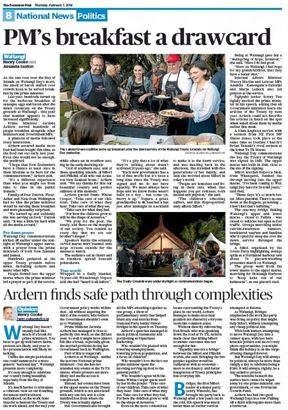 The PM's PR at Waitangi get top billing in the Dominion Post. Photo: PHOTO / RNZ Mediawatch

“Both leaders (are) attempting to move Waitangi Day into a calmer space with less bare-knuckle politics and more lovely photo opportunities,” he wrote.

But when that piece appeared in Thursday’s Stuff papers including The Dominion Post and The Press it was overshadowed on the same page or the facing page by one of those “lovely photo opportunities.”

Under the headline “PM’s Breakfast a drawcard” the DomPost detailed Jacinda Ardern and her ministers handing out the barbecued bacon, just like last year.

“A phalanx of media followed every interaction,” said the report.

Certainly did. And the PR masterstroke from last year paid off handsomely again.

TVNZ’s political editor Jessica Mutch-McKay agreed Waitangi 2019 was a success for the PM - but:

Next year is election year and that’s when it matters the most. If people think she hasn’t delivered there will be more fierce debate and challenges to what she’s saying.

But how many New Zealanders are as obsessed as our political reporters about whether an election is upcoming and how PMs manage their PR at Waitangi?

It’s the progress on big issues and the promises that count.

Those behind Don Brash’s appearance also got the publicity they wanted: blanket coverage of him being shouted down, and what he had said before that happened.

“There is enough genuine debate to be had about Waitangi Day without media reaching for easy headlines from those who seek to manufacture controversy," said Sam Sachdeva on Newsroom.co.nz

But the media have the option of giving the easy headlines a swerve in favour of substantial issues.

Sam Sachdeva identified some of those reporters can turn their attention to.

The new Māori-Crown relations office Te Arawhiti: will that succeed? And signals that targeted funding may make a comeback in this year’s Budget.

On Thursday, Waatea’s Dale Husband’s referred to that when he gave this verdict on Waitangi 2019.

"The Government has emerged from Waitangi Day with its dignity intact - but with increased expectations about what will be in this year’s wellness Budget for Māori," he said.

The media could emerge with more dignity too by passing up the photo opportunities laid on a plate for them by politicians and obsessing less about their political PR success and failure from year to year.