The prospect of a new party for conservative conservationists became big news this past week. Some reporters and pundits reckoned it could change the government in 2020 - even though it isn't even up and running yet and doesn’t have policies for voters to ponder. 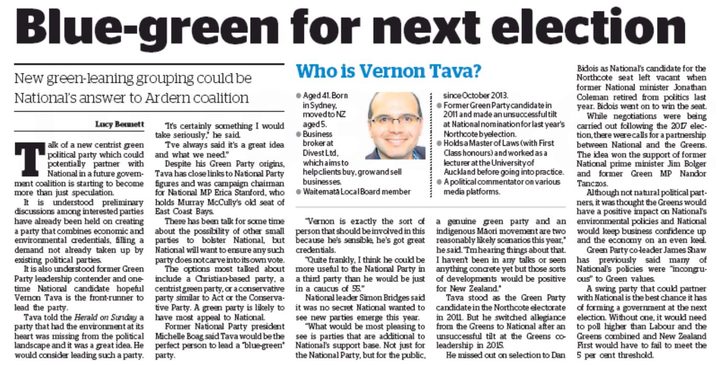 The Herald on Sunday seems certain the new party is a goer for 2020. Photo: PHOTO / RNZ Mediawatch

This summer two eye-opening documentaries told the tale of the great Fyre Festival fail of 2017.

What was hyped up by celebrities and social media influencers as ‘the party of all time’ ended up as ‘the party that never happened.’

Media pundits said the lesson was: don't believe the hype from self-appointed influencers with vested interests.

Last weekend a political party hit the headlines here in spite of the fact it doesn’t really exist yet either.

Blue-Greens movement could be National's answer to toppling Ardern, said the Herald on Sunday last weekend, making it sound like a movement with momentum.

One unnamed political commentator told the paper business would support it financially.

It would be an interesting option for us all when we stride into the ballot box in 2020 but after a slew of Monday morning mainstream media interviews with the front man, that seemed far from certain.

Vernon Tava could not say how many members or backers it had. It was too early to talk about “the nitty gritty” of policies, he said.

Both Mr Tava and National leader Simon Bridges insisted there had been no discussion of an Epsom-style deal to push the putative party into Parliament.

In an 11-minute chat on Magic Talk mornings Vernon Tava said he wanted cleaner water, but not new rules or laws for that. That was about it for policy.

He insisted the party was “imminent” but also said it was mostly based on conversations over the summer about “a gap in the market” for a green, non-left-leaning party.

There was definitely a gap in the market for political journalism about new parties with the potential to shake up coalition politics. Since the lack of a coalition partner cost National victory in 2017, that’s become an obsession for the press gallery.

Seeding the idea in the media was a roaring success, especially with radio hosts hostile to the current Greens.

“It’s got viability written all over it,” said Mike Yardley on Newstalk ZB, convinced “Kelburn mums” and “Three Kings couples” turned off by the social justice wing of the Greens would go for the new alternative.

“You want to save the world, but also smack your child,” was how ZB’s Mike Hosking saw the typical Blue-Green supporter.

Pundit after pundit pondered that chance of the new party “getting five percent” in 2020 or ensuring the current Green Party could not - as if voting was some kind of ideological Sudoku.

Few mentioned the party already up and running that is business-friendly and has detailed policies on the environment including a specific one on water: The Opportunities Party.

All this would have been music to the ears of those who floated with the idea of the new Blue Greens.

But to guess sensibly at its appeal with voters, surely you’d need to have some idea of what people would be voting for?

ZB’s Andrew Dickens didn't fancy its chances, but he reckoned the New Conservatives with firebrand David Moffett now on board  would be a good bet. The party got just 6000 party votes in 2017.

She said she had told her editors about a source who had been approached by Michelle Boag and National Party strategist Murray McCully about the idea “weeks ago”.

Heather Du Plessis-Allan told listeners Vernon Tava did not want to speak to her about that at the time.

What Vernon Tava this week called “an idea whose time has come” was presumably off-the-record back then. The idea came only out this week when he and his undeclared backers - who remain in the shadows - wanted it to.

As recently as October 2017, political strategists prompted the media into mulling a Blue-Green hook-up.

During the post-election coalition negotiations a last-minute marriage between the Greens and National - which would mean NZ First and Labour couldn’t take power - was heavily reported.

At the time, several political journalists  reported money might be changing hands to promote the idea, though none would say who might be paying whom or for what.

How many conservative conservationists are there who might make a new Blue-Green party a real power?

I took a look at some of the data from the 2017 NZES to see if there really are many "teal" Green voters who prefer National to Labour. There aren't many: https://t.co/Z6XLuLkUjx pic.twitter.com/yPXwwWlqFU

“Fully 84.42 per cent of those who party voted Green said they would prefer Labour to lead the Government. Furthermore, these voters overwhelmingly rated themselves as left-of-centre politically - far more than Labour voters did,” reported Henry Cooke.

Three-quarters of Green voters rated themselves as left-of-centre on a 10 point scale.

“The talk is of there being space for a centrist environmental party - but there is not really that much of a gap that needs filling,” RNZ deputy political editor Chris Bramwell concluded.

She pointed out many Green Party policies considered radical back in the day have been picked up by other parties since: the Capital Gains Tax, zero carbon by 2050, Auckland city rail and home insulation.

Chris Bramwell also pointed out National has already had its own Blue-Green group of MPs for more than 20 years.

Political strategist Brigette Morten pointed out you need 500 financial members to register as a political party, not to mention money and a grassroots base for electioneering.

"But new political parties and the ideas they bring to the political debate is good for democracy,” she added.

“It’s good they’ve put their hands up. That what's democracy is all about,” he said.

That’s part of it.

But usually it’s the ideas and the policies that come first, and the parties and public support form around those - not around someone putting their hand up and hoping the media take notice and then start speculating on the impact it might have.