Petrol prices have hogged the headlines this past week. Much coverage has been about what’s affordable in the short term, not what’s sustainable in the longer term. It often is when the price spikes and things get political. 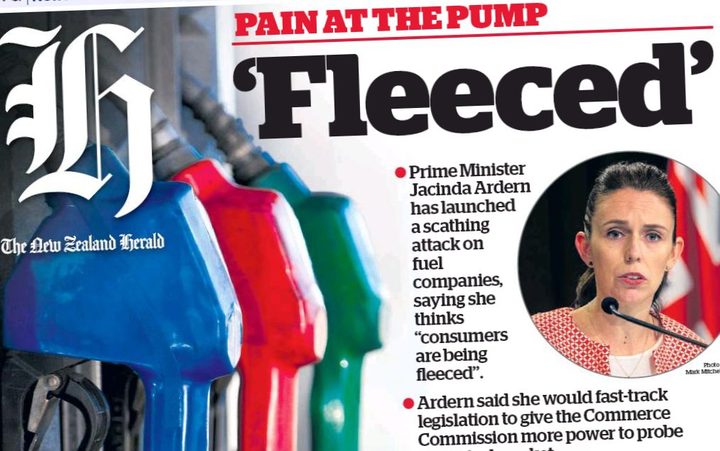 Last Monday the PM revved up the petrol price media coverage by telling reporters she was in part prompted by the media.

“I am hugely concerned. There has been reporting in recent days on the price of fuel - and with good reason,” she said.

She wanted to pass a law as soon as possible to compel fuel companies to force the fuel industry to co-operate with a study of the petrol market by the Commerce Commission.

The “pain at the pump” cliche was rolled out on TVNZ and Newshub in the six o'clock TV news that night, and on the Herald’s front page the following morning.

Ten years ago, the headlines warned of $2 petrol by Christmas. It didn’t happen, but the barrier was crossed soon after.

Three years later, Gull pulled the price down below $2 just before Christmas - or even cheaper with a supermarket discount voucher.

By Christmas 2014, the AA was hailing another price plunge below $2.

However, what goes down can come up.

Four years on the media are now softening up the public for the prospect of $3 a litre petrol by next year.

But there's an extra political factor now too.

The opposition seized on the higher than expected financial surplus announced this week to demand reversal of petrol tax hikes, while the AA demanded GST be stripped to save motorists money.

“The Government would be wise to take heed, tolerance of petrol taxes may be reaching the limit,” said the Herald.

On Tuesday The Herald canvased the cheapest and most expensive places to fuel up in New Zealand; TVNZ broke down the cost of a litre, Newshub compared New Zealand and overseas prices and Stuff checked out how rising fuel taxes will be spent.

Newstalk ZB said women could miss out on critical pregnancy care because of petrol, especially in Northland - though as host Mike Yardley pointed out, petrol prices were actually lower there than in many other regions.

A bit like last year’s inconclusive in inquiry, the answer was that it was hard to say how effectively competition was functioning. 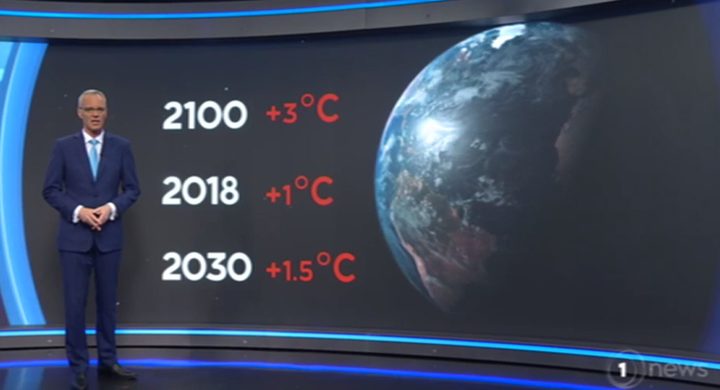 Simon Dallow with the alarming warnings from the IPCC on TVNZ1 News - after a report on petrol prices first. Photo: screenshot / TVNZ 1 News

Meanwhile under the headline: New Zealand is busy bickering about petrol prices while the world burns, Stuff correspondent Charlie Mitchell said all this was going on against the backdrop of the IPCC's new report into the waning possibility of limiting warming to 1.5C by the end of the century.

"Within an hour of the report's release, the prime minister was talking about fossil fuels at her post-Cabinet press conference," he wrote.

"Jacinda Ardern wasn't talking about how to stop using them – which the IPCC report made abundantly clear needed to happen rapidly – but how to burn them more cheaply."

The clanging contrast was obvious in Monday’s TV news bulletins.

Having lead with petrol prices, TVNZ 1News segued into the warning of sacrifices required to save the planet  - off the back of the rising costs of holiday road trips.

“I find my inbox full of pseudo scientific rants from listeners about all the reasons why the perceived human effect on climate change is a fiction."

On Newstalk ZB, that’s no surprise.

Several of its top hosts have told their listeners over and over down the years not to listen to climate science.

Mitchell, on Stuff, said our reliance on fossil fuels should have been the issue on Monday, not lowering the petrol price - and journalists should take some blame.

They could have had the IPCC report since last weekend, he said, to set the agenda.

It is not just the PM and the politicians who have awkward optics on this issue. 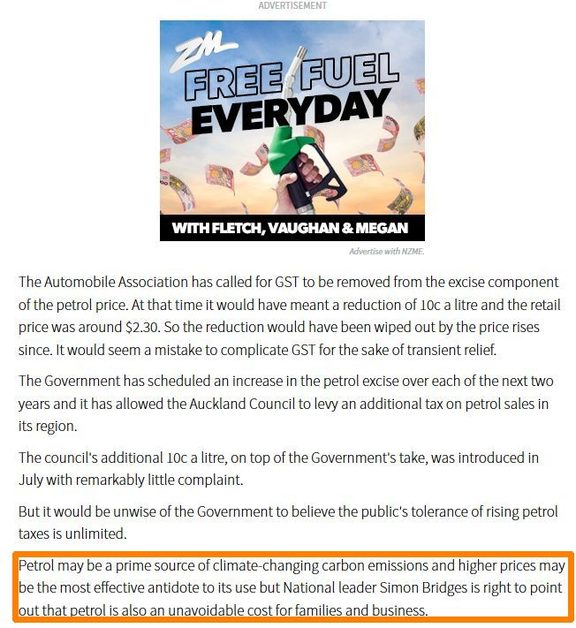 The Herald's editorial on Monday on the problem of petrol - with promo for ZM's free fuel. Photo: screenshot

The Herald's online stories about the issue on Monday were often broken up by adverts promoting a supermarket chain’s petrol discounts with Z Energy.

On Wednesday, Stuff app users were offered a “today-only” 10c-a-litre Fly Buys discount and urged to tap the app to find the closest station.

And The Herald’s editorial on Tuesday which said “petrol may be a prime source of climate-changing carbon emissions and higher prices may be the most effective antidote” carried a promo for sister radio network ZM giving away free petrol every 15 minutes.

The ZM website also directs users to the cheapest petrol around the country.

In Friday's Herald, the paper's former economics editor Brian Fallow said fuel prices were now too low, not too high.

"Consumers of petrol and diesel, and other fossil fuels, need to get used to the idea that the price of these things will have to keep on rising to the point where we no longer consume any.

"The only question is how long it takes for commerce and government between them to deliver the alternatives we need for that to be feasible, and how much planetary damage is inflicted in the meantime."

One event overshadowed in the media by the petrol price issue was the Environmental Defence Society's business and climate change conference in Auckland this week.

"To the armchair experts who've googled their way into dismissing the science of climate change, the message is clear: You don't have to believe in it to plan for its impacts," wrote one of few to report back from it,  Business Desk editor Pattrick Smellie.

"To do otherwise is to have your head in the sand on a beach with a rapidly rising tideline."