Nauru squirms under the spotlight

Nauru’s government has gone to great lengths in recent years to keep journalists off the island - and away from the hundreds of asylum seekers languishing in limbo there. Mediawatch looks at what happened when the Pacific Islands Forum gave some reporters a rare chance to report from on the ground this week.

Jacinda Ardern has offered to bring some of Nauru's asylum seekers to New Zealand she told reporters she was anxious not to raise their expectations if she met with any of them during her trip.

But no such expectations would be raised by media taking the rare opportunity to talk to refugees there -- something the government there has been desperate to avoid in the past.

Ahead of the Pacific Islands Forum, a new report from two refugee organisations in Australia detailed the trauma endured by people on Nauru seeking asylum - including the children there. Last month, the ABC in Australia angered Nauru’s government by airing the accounts of three health workers recently returned from the island.

First-hand accounts from Nauru have been hard to come by in recent times.

RNZ Pacific’s Sally Round told Morning Report the flow of information from Nauru dried up after the detention centres were built.

"Before that we had relatively easy access to minister and the president. Now we get little or no response to requests for interviews or comment. We have to rely on their newsletters, statement and tweets," she said.

She also made the point there are no independent media on the island to tap into.

Since 2014, Nauru has kept reporters out by charging more than $US6000 for visa applications - with no refund if no visa is granted. 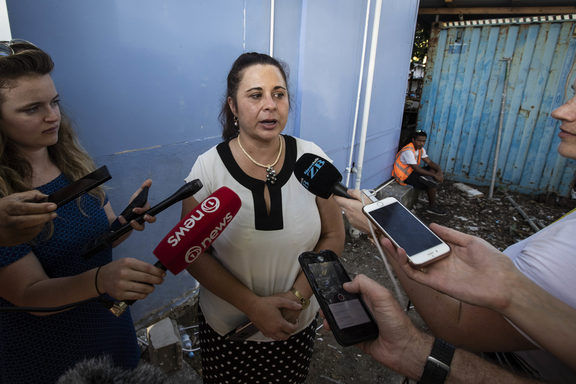 TVNZ journalist Barbara Dreaver speaks to the media after she was released by Nauru Police. Photo: New Zealand Herald/Jason Oxenham

Nauru’s President Baron Waqa has said the cost is justified because foreign media have made money out of what he regards as unfair and unbalanced reporting on the plight of asylum seekers on the island.

Back in February, New Zealand’s Minister for Pacific Peoples - Aupito William Sio - said he’d talked to Nauru's president and he was confident journalists would be “able to conduct their affairs as they do when they are here in New Zealand" during this week's Forum.

In May, Nauru cited limited accommodation as a reason to restrict the number of media personnel.

There was also a threat to revoke the visas of journalists filming or photographing the refugees or detention centre facilities.

The government banned Australia’s public broadcaster the ABC, which was accused of "continued biased and false reporting" about the country”.

Australian media organisations called for a media boycott of the Forum in support of the ABC after the ban was announced.

Hopes for a united front across the ditch were dashed by Rupert Murdoch’s News Corp.

“You can read all the news from the trip in News Corp papers, like @dailytelegraph and @australian but nowhere else,” she said.

So much for solidarity:

It led to this exchange on the ABC show between an editor of News Corp’s The Australian and former a former Tasmanian senator.

Where is your patriotism? It's either one in all in. Or you don’t go. It's that simple" - former Tasmanian senator @JacquiLambie thinks News Corp should "stand together as one" with the Australian Federal Press Gallery's boycott of the PM's trip to Nauru, after the ABC was banned pic.twitter.com/01MxBHUQAb

A glance at Australian media this week reveals little appetite for stories about the Forum - possibly because the country's new PM decided not to attend.

But it did make headlines when TVNZ Pacific correspondent Barbara Dreaver was detained by Nauru police earlier on Tuesday afternoon during interviews with refugees.

On Newstalk ZB, drive host Larry Williams joked that Nauru should have held her in one of the refugee detention centres so she could report first-hand on the conditions

She was released the same day and her Forum accreditation was restored. The Nauru government sent out this stern warning afterwards:

To NZ journalists on Nauru. You aren’t above the law. Walking into certain areas unannounced where emotions run high increases risk & places lives in danger. The police work hard to protect everyone. Follow the rules and go through proper channels & you won’t have a problem.

It was one of those are occasions where politicians go into bat for the media.

"We think the most important right of all rights in politics is freedom of the press," foreign minister Winston Peters told reporters.

He is one of a handful of politicians who have targeted the media with legal action in the past.

ACT leader David Seymour told RNZ New Zealand aid to Nauru should be cut if Nauru cannot uphold "basic values like freedom of the press and not kidnapping journalists".

It's odd the human rights of one reporter detained comfortably for four hours should trigger such a threat - but not the indefinite - and definitely uncomfortable - detention of hundreds of people with nowhere else to go.

In the end Jacinda Ardern's flew in flew out without meeting a refugee.

"Could we have imagined that media scrutiny, controlled as it has been, might shame Nauru and its Australian enablers? Instead we have seen further predictable abuses of media freedom," lamented The Press in an editorial, which also said the Forum had been "an opportunity squandered".

But the Nauru government's obvious discomfort in the presence of proper reporters on its own soil tells its own story too.

If nothing else, reporters revealed that the plight of the refugees is not only a source of shame for Nauru, but also a key source of income in a country where the money ran out along with its phosphate.