Hard on the heels of Limogate, flying the PM to Nauru this week turned political pundits into amateur accountants - and talk radio hosts into advisors in parenting and Pacific diplomacy. ​ 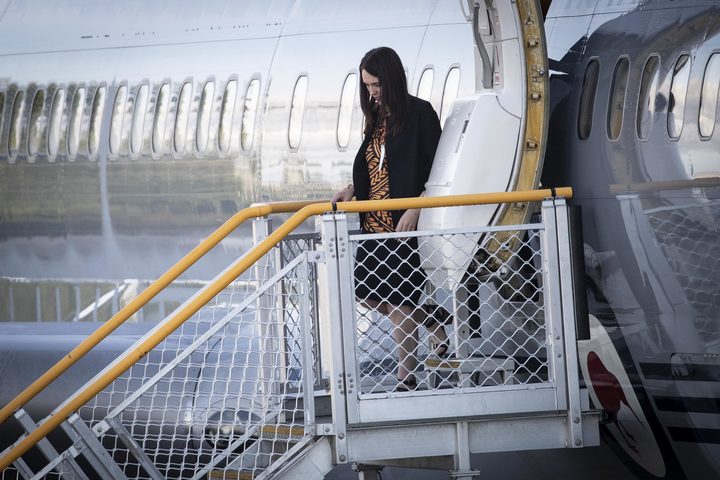 “I tell you what . . . the cost of having a baby will weigh heavily on the taxpayer this week,” Newstalk ZB’s political Barry Soper told his listeners.

The cost of the RNZAF flying her alone to the Pacific Islands Forum in Nauru became a huge talking point for the news media as soon as the arrangements were revealed.

It prompted a veteran Pacific affairs reporter to take to Twitter:

Perhaps Barry Soper could refund decent chunk of many freebee trips he had on air force flights? Took lot of fuel to lug him around & he wasn't charged... https://t.co/mWLmY8vTlw

The same could be said of many other reporters who’ve hitched a ride with the Prime Minister or Foreign Minister in the past. The New Zealand taxpayer has saved their companies a small fortune down the years.

But Barry Soper reckoned the PM didn't need to go in the first place because Winston Peters would have it under control and Australia’s new PM wasn't going either.

Scott Morrison had his own reasons for giving it a swerve. He probably didn't want to kick off his leadership with a visit to the place the BBC this week called the Island where children have given up on life.

All this of course followed the media-driven angst over Simon Bridges ‘Limogate’ bill and in trying to work how much taxpayers’ money on the line this time, political journalists turned into amateur accountants.

Newstalk ZB initially reported the cost would be near $50,000 "based on fuel prices from two years ago."

The guesstimates had gone up by the time ZB Drive host Larry Williams grizzled about the trip later in the day, but his guest on The Huddle Matthew Hooton said it was essential the PM went to Nauru and the cost didn't matter.

“If we are lucky enough to elect a Franklin Roosevelt as our Prime Minister, he will come with the cost of getting his wheelchair on and off the plane,” he wrote in a subsequent opinion piece for RNZ.

As guesstimates increased further, so did the alarm of Newstalk ZB hosts on Tuesday.

"It is wrong to spend $80,000, on travel for one person. Plain wrong. Even when that one person is the Prime Minister,” Tim Dower sternly told ZB listeners. 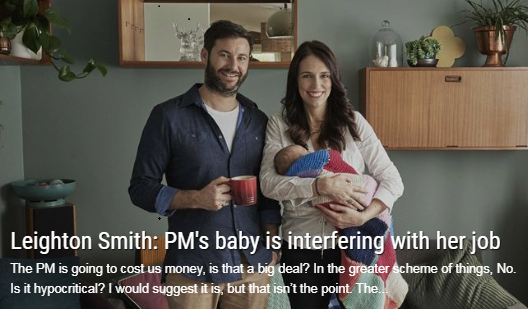 Over at Radio Live, Mark Sainsbury said he’d been making some calls and the cost of a private hire would be six figures.

On the AM show he said the quibbling was petty, but AM host Duncan Garner criticised the trip with reference to seriously ill Hamilton woman Abby Hartley stuck in a hospital Bali.

"I said rules and precedents are broken and set all the time. Wasn't I right Prime Minister?"

That story turned out to be a bit more complicated. Checkpoint that night revealed she had not declared a pre-existing condition, but that’s another story . . . .

Back on Newstalk ZB, morning host Leighton Smith declared the PM’s baby was interfering with her job.

"As a working mother you have to make choices, we all know that, every working woman who has had a child and a job knows that. Breastfeeding is to be encouraged for three months. Well the three months is up but she has decided she isn’t going to stop, and wants to keep breastfeeding. So that is interfering with her job as she chose to do it.

Where am I wrong so far?"

The PM’s baby was born just two and a half months ago - and the Ministry of Health recommends exclusive breastfeeding for first six months of a child’s life. After 6 months, mothers should start babies  on solid food and also continue breastfeeding until they’re at least one year old.

Listeners in the Wellington region get Heather du Plessis Allan instead of Leighton Smith.

"To save $80,000 wouldn't you just give the baby formula for three days?" she told ZB listeners.

"I can't think of a Prime Minister before Jacinda Ardern who would have . . . been this dumb. I predict baby Neve will be this PM's greatest asset. She will also be the PM's greatest liability," she said.

She called Nauru a “hellhole” and said it was not worth attending the Forum anyway because the Pacific Islands “don’t matter.”

“They are nothing but leeches on us. The Pacific Islands wants money from us,” she told ZB's Wellington region listeners.

She said the only point in going would be to tell their leaders to reject the overtures of China in the Pacific and stick with New Zealand and the US “on our team".

(Though if getting the ‘leeches’ to stick on ‘our team’ was important, surely the PM’s presence would help?)

"Commentators' outbursts of faux outrage over the temerity of the Prime Minister not cancelling her trip on the basis of cost are misdirected," Fran O'Sullivan wrote in the Herald

"New Zealand's focus on the Pacific Reset would have looked pretentious and insincere at best if she had not shown up," she said.

"It would have been cruel to deprive an eleven-week-old baby of her mother's warmth for a three-day period," she added.

Ahead of the May budget, more than one billion dollars was pledged for the “Pacific reset“ policy, much of it for aid programmes in the Pacific.

How that is to be used is a bigger issue at the time of the Pacific Islands Forum than the bill for freighting the PM to the event.