The death of TV broadcaster Greg Boyed last week sparked a flood of tributes in the media and many anguished articles on the scourge of suicide and depression. The media have been warned that intense coverage can be counter-productive and restraint is required. How did they respond when one of their own was involved? 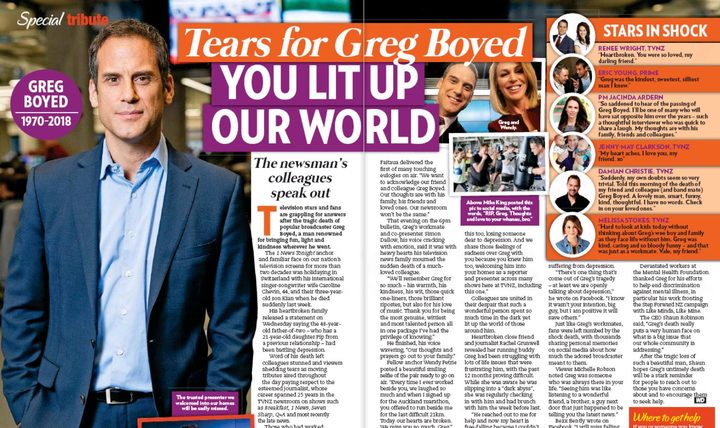 “Why couldn't the reportage be straight to the point?” TVNZ news presenter Peter Williams asked in the Bay of Plenty Times this weekend.

He was lamenting the media convention that suspected self-inflicted deaths should not be reported as suicide without the confirmation of a coroner.

He said it was because “according to some in management . . . there is no need to report an incident which might inspire copycat behaviour.”

In fact reporting guidelines developed by the Ministry of Health were agreed after extensive and prolonged consultation with the news media.

The guidelines also say media should not report the method of death or speculate on the cause. They should not romanticise, rationalise or normalise suicide.

Another key principle is that reports of individual instances should not be unduly prominent in the media.

“Surely it would help if we addressed the issue face on,” said Peter Williams.

“You never know, expressing its raw starkness might prevent someone else doing the same thing,” he said.

The fact that we don't know how people respond to visceral front-and-centre coverage is part of the problem.

The TVNZ veteran is not the only journalist who resents reporting restrictions and has claimed the media are prevented from reporting the issue fully. But these days, there are more media reports about suicide than ever before - and they can have a wider reach than ever before.

Peter Williams comment article for his local paper was republished by NZHerald.co.nz and headlined Newstalk ZB’s news from midday on Sunday.

The hosts of TVNZ’s Fair Go signed off last Monday with a tribute to Greg Boyed and urged viewers to “give someone they love a hug”.

Fair Go’s tribute was carved out as a video-based story for TVNZ’s One News Now website with links to other tributes from other TVNZ shows such as 1 News Tonight and Q and A.

A tribute by TVNZ’s Daniel Faitaua - closing the first TVNZ news bulletin to air after the announcement of GB’s death was also published online by TVNZ and then by other outlets, and widely shared online and via social media. 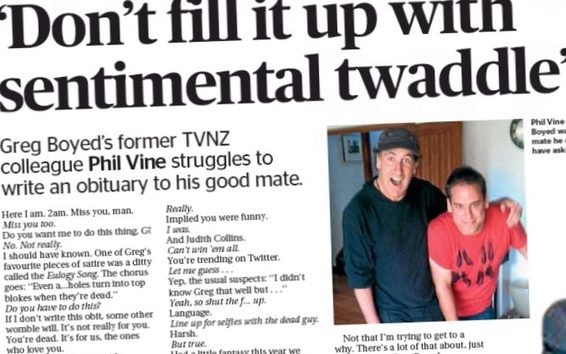 An unorthodox obit for Greg Boyd in the Sunday Star Times from his friend Phil Vine. Photo: PHOTO / RNZ Mediawatch

There were plenty more personal thoughts elsewhere in the media too.

Some went well beyond expressing shock and sorrow.

The Herald published an anguished article by a colleague and close friend Rachel Grunwell who said Greg Boyed had been “fighting hard to keep black dog at bay”.

It was one of many pushed out to readers' phones as a news alert.

The Herald also published an open letter to New Zealand men considering suicide written by a former NZME journalist, now a freelance writer who first published it on her own blog.

“This is what will happen after you die,” it began, followed by a detailed description of the grief and confusion felt by family and friends after a suicide.

Some journalists who have previously acknowledged their own mental health struggles have questioned the tone and volume of the coverage.

“There has been a willingness to make space, gently and compassionately, for discussions on mental health on behalf of Greg. That has made me proud of the journalistic community,” said Deborah Hill Cone in her weekly New Zealand Herald column last Monday.

But the media’s urgings after Greg Boyed’s death worried her.

On The Spinoff, TVNZ journalist Jehan Casinader - who made the TVNZ series The Inside Word last year - also worried about the volume of coverage.

“Greg’s death had become part of the insatiable news cycle. Journalists, paralysed by their own grief and confusion, did what seemed most obvious: delivering more content. Soon, the internet was saturated with tweets and opinion pieces, mostly written by pundits and former TV stars.” 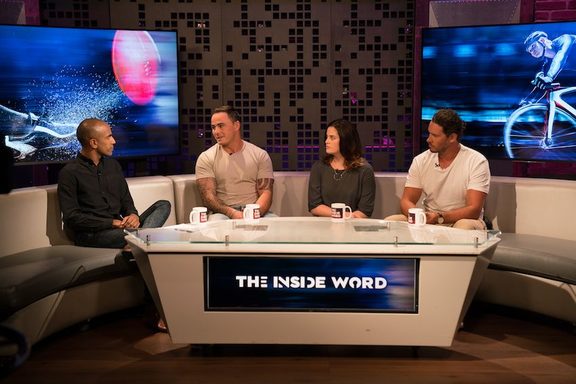 At best, he said, these were “well-intentioned attempts to process the sudden death of a popular public figure”.

But at worst, they were "undignified and . . . can be described as shameless clickbait”.

“It should worry us because this kind of reporting can put lives at risk, and contribute to the damning mental health statistics that we so often lament. Some of this reporting is doing more harm than good.”

TVNZ’s Jehan Casinader said as someone who has experienced depression himself, the coverage of Greg Boyed's death disregarded many of the guidelines and Mental Health Foundation advice was also ignored by many outlets - especially on prominence.

He said the Herald sent out news alerts about Greg Boyed three days after he died.

The Mental Health Foundation issued specific advice to media the day Greg Boyed's death was announced, bearing in mind that they would be reporting on 'one of their own'.

"Whenever someone who is beloved and comes into your home every night dies, people who know him and love him want to pay tribute," the Foundation's Sophia Graham told Mediawatch.

But the number and prominence of stories about Greg Boyd amplified and prolonged the impact of the news.

Guidelines warn against "romanticising" suicide and Sophia Graham said there is research to indicate that heavily eulogising people "is not necessarily helpful."

"But at the same time policing the language of people bereaved by suicide is not something that we're here to do," she said.

She said it could be time for new guidelines as existing ones don't take account of changes to the Coroners Act in 2016.

"Certainly in terms of the prominence of stories, the volume of stories, that fact that apps were still pushing out stories about Greg Boyed days after he had died - it's hard to avoid them. That's why we need to have these discussions," she said.

"It's emblematic of the way we report suicide. There's a lot of talk about suicide death but not about recovery or support for bereaved. We're still not having the conversations that are going to save lives," she said.