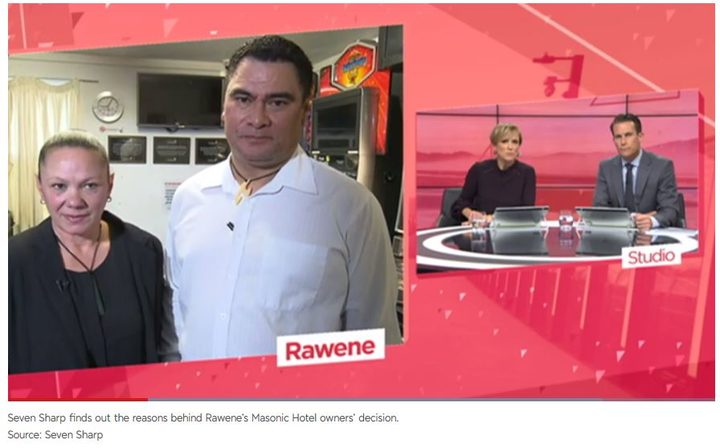 News that a pub in the Far North had turned off its pokie machines after a young mother left her baby outside while she gambled was met with enthusiastic support from many of the country's leading television presenters last month. But Pub Charity chief executive Martin Cheer says not a single journalist got in touch for its side of the story until it sent out a press release casting doubt on key claims of the reports last Tuesday.

On Saturday 26 May publican Glen Dick announced on Facebook the Rawene Masonic Hotel had turned off its pokie machines for good in reaction to a  "young girl" leaving a baby outside while she gambled on the machines.

The following week, Duncan Garner, the host of Three's AM Show, declared Glen Dick his "honorary member of the day."

“Glen Dick is a leader," Garner said. "A quiet humble leader. But you are proof Glen that you don’t need rules and government to make change in our communities. All we need is unselfish good men and women like you are. Appreciate it. you’ve done well for your country.” 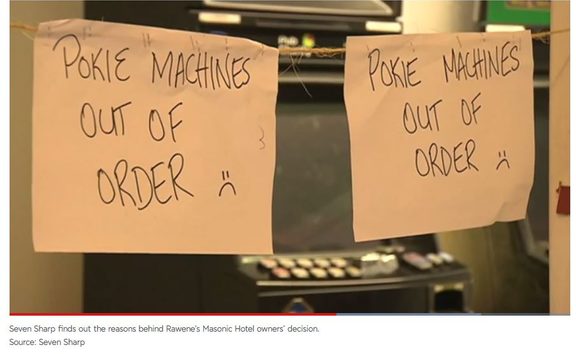 His co-host Hillary Barry agreed with the sentiment, telling Glen Dick and his partner Lana Turnbull: "“It’s a great thing you’re doing... and congratulations on what is a very courageous decision.”

Three's The Project took a similar line with host Kanoa Lloyd introducing Glen Dick and is parter Lana Turnbull like this: "Congratulations you two first of all for making such an amazing call."

Both Seven Sharp and The Project relied on the couple to find out how the machines’ owners felt about the decision and they weren't alone. Pub Charity CEO Martin Cheer told Mediawatch not a single journalist got in touch with the organisation until it put out a press release a full week later.

In the press release Pub Charity claims it turned the machines off remotely as a result of late banking of gaming proceeds and that a review of CCTV footage failed to come up with any evidence that the event described by the couple had ever taken place.

The couple's lawyer, former ACT MP David Garrett, has disputed both claims and speculated Pub Charity was worried about others following the Rawene Hotel's example.

Within a couple of hours of the press release coming out Stuff’s national correspondent Steve Kilgallon published a story back-grounding the claims and counter claims with comment from all the interested parties.

Most of the information could have been in the original stories if only a journalist had bothered to seek it out.

But the key issues raised by the story remained the same: Are pokies causing more harm than good? How do you weigh up the tens of millions of dollars in donations flowing back to local communities against the even larger sums being sucked out of the pockets of those playing the machines? Are the machines addictive? And, are pubs now dependent on rent from gambling machines to stay afloat?

In their rush to gush over a seemingly brave decision by local publicans the 7pm current affairs shows failed to address any of those questions in any depth and made no attempt to find people who could answer them.

Last year, New Zealanders spent nearly $870 million on gambling machines – excluding those in casinos. Far more than they spent on Lotto and nearly three times that spent at the TAB. A cluster of five pubs in the far north, including the Rawene Masonic Hotel, pulled in just over $500,000 in profit over the last quarter. On average 46 percent of profits are returned to the community in grants.

It’s an industry that should come under real and regular scrutiny. TV presenters and journalists celebrating an individual decision to turn off seven pokie machines without any fact checking, background information, or comment from the machines’ owners does nothing to hold the industry to account or inform the public on the pros and cons of the country's gambling laws.