Rural press in retreat in time of crisis

In the midst of a national cattle disease crisis, the rural press is being shaken up. Some titles are changing hands and the country's biggest news publisher Stuff is closing weekly farming papers and cutting its reporting. But its rivals say farmers are actually big fans of print and are less likely to get news online. 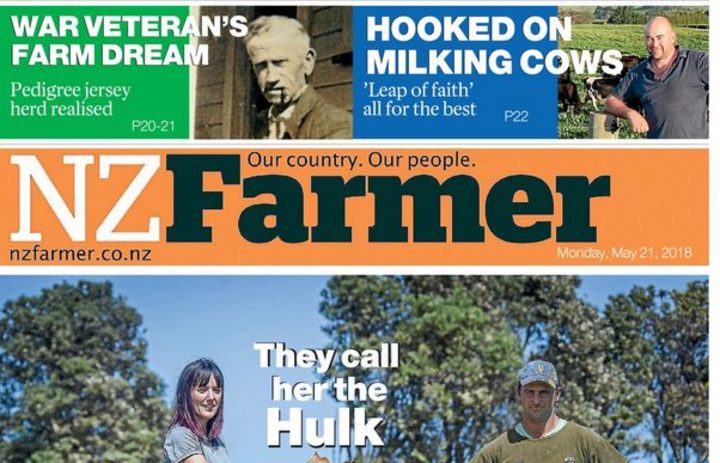 Jacinda Ardern appeared in front of a live audience as a hologram last Monday to launch Techweek - a showcase of New Zealand's technology and innovation.

But at the time the PM herself was actually on a farm in Waikato confronting a real-world crisis in a New Zealand industry with much deeper roots.

Jacinda Ardern told farmers and rural leaders she wanted their input on dealing with the spread of mycoplasma bovis. There were certainly plenty of opinions offered in the media.

“The worst option is for the government to try and be the boss,” he wrote in his weekly column. 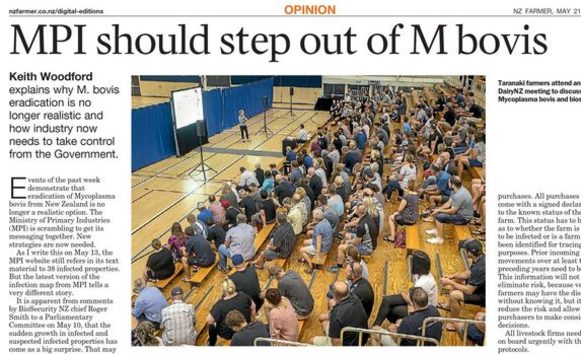 Keith Woodford's column in the 'NZ Farmer' urging the government to step back and let farmers deal with mycoplasma bovis. Photo: screenshot

That opinion would have reached almost every farmer in the country because NZ Farmer is delivered free to rural mailboxes.

But not for much longer.

Elsewhere in this week’s issue, NZ Farmer told readers the last issue would be printed and delivered next month.

Along with 15 other Stuff community and rural titles, NZ Farmer is closing as the company "pursues a stronger digital publishing strategy."

Stuff chief executive Sinead Boucher said farming stories would still appear online on Stuff’s website and app, but the closure of the rural titles will mean the loss of nine journalists and six commercial staff.

Stuff is proposing to retain just three editorial staff to to cater for the major newspapers’ farming sections and online content.

This move comes after a shake-up at another weekly paper delivered free to farmers.

Last week the stock exchange - NZX - sold Farmers Weekly back to its former owners Dean and Cushla Williamson. The Feilding-based publishers say they will retain all 15 current staff.

"The most important thing is that the rural media is owned by people who understand the rural scene," Keith Woodford told Mediawatch.

"Given the national reach of Stuff, it is really important they still have a rural voice," he said.

But with far fewer reporters, he fears urban people will see even fewer rural stories.

"Urban New Zealand has lost touch with agriculture and has some pretty uninformed views on complex issues," he said.

What farmers want from their media

This week another publisher putting a farming paper in farmers’ letterboxes once a week - Rural News Group - hit out at its rivals.

“The key to RNG’s popularity with farmers and advertisers is investing in relevant and quality content. Failure to do so leads to publication closures like those in this week’s announcements. Now more than ever the primary sector needs reliable and believable news and information that is relevant to them,” the Auckland-based publisher said a statement.

These were findings of The Rural Media Hab­its Survey 2018 - commissioned by four rural publishers including RNG and NZX - 852 farmers' media habits were surveyed, with lifestyle block holders excluded.

"Assumptions being made about how to market to farmers and growers are often made on the assumption that they consume media the same way as their city cousins. This is not true,” said the publishers in a joint statement.

"We knew internet use is increasing (on farms) but it doesn't seem to be at the expense of the print readership. That's different to the narrative we're hearing about the rest of the media," RNG managing director Adam Fricker told Mediawatch.

Farmers use computers and IT as a business tool, he said.

"Unlike people who are making marketing decisions, (farmers) don't sit around in front of a computer all the time," Mr Fricker said.

Internet connectivity "at dial-up speed masquerading as broadband" was also a problem for those far from major centres, he said.

However, when asked how their media use had changed in the past three years, 15 percent of farmers surveyed said they had reduced their print readership or cancelled a subscription.

The likes of Rural News and Farmers Weekly depend completely on advertising and farmers' willingness to read them.

So are they prone to echo farmers' concerns rather than challenge them?

"Too stoned to work" was the headline on the front page story for Rural News last week.

The entire story was based on claims from Vegetables NZ chairman Andre de Bruin in an interview.

"As de Bruin spoke to Rural News he could see five seasonal workers sitting in a vehicle either stoned or drunk when they should have been at work," the story said.

This is a topical issue, with poor pay and conditions offered by kiwifruit firms for seasonal work in the spotlight.

But Rural News did not raise that - or quote anyone other than Mr De Bruin.

"That has been a rolling story and we have covered the labour issues," Adam Fricker insisted.

"Maybe we should have restated that ... but it was unusual to have an industry leader speaking so frankly and we gave it full coverage," he said.

"At times I get frustrated by the populist perspective in the rural media that panders to the people who are going to be your readers, but that's not specific to rural media," said Keith Woodford.

"The more savvy farmers know to look closely at what they're reading and why writers are pushing a particular perspective," he said.

The government is due to make big decisions on handling mycoplasma bovis this week.

Have our media - urban and rural - given the issue the prominence and attention it merits?

Adam Fricker said that, with some exceptions, the news media had treated the story "with the gravity it deserves."

"I think it needs to move now to how well our systems are geared to cope with a more serious outbreak. Foot and mouth would be more devastating and I don't know that we're ready," said Mr Fricker.

Keith Woodford praised Newshub and Checkpoint for pushing the issue to the top of their bulletins.

"We have a lot of people now whose businesses are getting destroyed. This is a huge call the government will be making in the next few days. It will be back in the news for sure," he said.