The backers of a new media venture in Queenstown and Wanaka say the region risks becoming a “digital backwater” and - like other places in the South Island - it's starved of good local journalism. How do they plan to put that right? 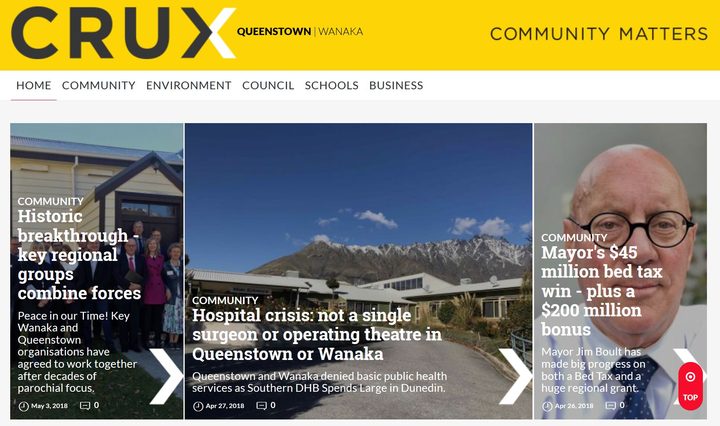 When long-serving TV3 reporter Jeff Hampton left the company in 2016, he told Mediawatch South Island journalism had been a victim of our media companies’ digital transitions.

There were far fewer reporters working in Christchurch at that point than there were five years earlier before the February 2011 earthquake, he said. The ranks of broadcast journalists have thinned out even further since then.

RNZ has just two full-time reporters in the South Island outside Christchurch. In 2016, TVNZ announced plans to cut back to one reporter and one camera operator for all of Otago and Southland. Southern mayors launched a petition that helped force TVNZ to reconsider.

Publisher Stuff has the biggest network of journalists and publications in the South Island, but it has repeatedly warned that can’t be sustained as circulations and revenues fall.

"There are really good stories here, and they should be covered by journalists who live here," said Jeff Hampton two years ago.

Last February, the not-for-profit Southern Community Media Trust was launched in Queenstown to try and achieve that.

Philanthropist Dick Hubbard is a chief trustee and main donor. The trust is also supported by the University of Canterbury's school of journalism which hopes it will help train and develop new journalists. 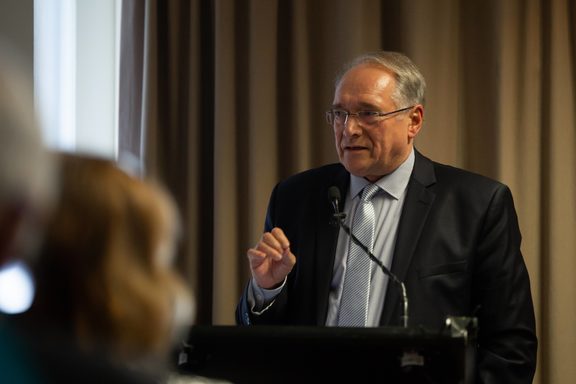 The SCMT has employed a former RNZ and Otago Daily Times reporter Jessica Maddock in Wanaka. The founding editor is former RNZ reporter in Queenstown Peter Newport, who has worked with BBC News overseas and Channel 9 in Australia overseas - and plenty of other New Zealand media outlets in the past.

Crux launched with news sections for community, environment, schools, council and business - all ad-free. It led with a story about the region’s hospitals being ill-equipped for emergencies. 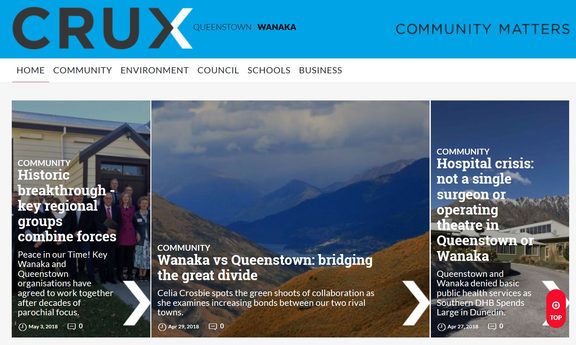 The Wanaka homepage of the Crux site. Photo: screenshot

“Queenstown and Wanaka risk becoming a ‘digital backwater’ if action is not taken," Peter Newport said in February when the trust launched its plans.

Yet Queenstown Lakes is riding high on tourism - an industry that attracts media attention. It has wealthy residents and profitable businesses. Is it really at risk of being overlooked by the news media these days?

"It is," insists Peter Newport.

"Queenstown's image is different to the realities. There is money but it doesn't trickle down through the community," he said.

He points to the ski resort town of Aspen in the US where intensive property speculation dented the viability of tourism.

"We have serious problems down here. Most people are working in a minimum-wage economy in tourism. Tourism will struggle if there isn't a community to support it," he said.

Peter Newport has reported on aspects of this in the past for RNZ and more recently in a long written piece for The Spinoff. It's the sort of issue Crux can address at length too.

"The meaning behind important stories reported these days is often missing," he said.

He believes the high cost of living in the region has dissuaded media organisations from citing reporters there.

"We've arrived at a community ownership model which means we escape the issues about finding investors, working out the value of the business and deciding how many people get shares," he told Mediawatch.

"How cool is it that businesses can buy space on a local platform and know that the profits are going back into the welfare of that community?" he said.

But does this 'community-backed' project really depend upon the ongoing generosity of former entrepreneur and philanthropist Dick Hubbard?

"This is community-funded and the platform (Crux) will initially be part of the trust. After a short time - maybe six months - the platform will move out of the trust and operate on a commercial basis. The trust will provide content, but the platform provides revenue back to the trust to pay for more content," he said.

"We're seeing the beginning of a New Zealand universe of new media. How exciting would it be to see New Zealand-owned media work in the regions and the metropolitan areas? Newsroom, The Spinoff, the Nelson and Wanaka apps are all part of the solution and I think we will all end up sharing and forming networks," he said.

"We have to work together to find new and relevant media that work well for the people who actually live and work in our communities," he said.