Whether to report on the false rumours about the prime minister's partner created a quandary for the media. Could they report on slurs designed to do damage without amplifying the effect of them and playing into the hands of the rumour-mongers? Mediawatch looks at how they responded. 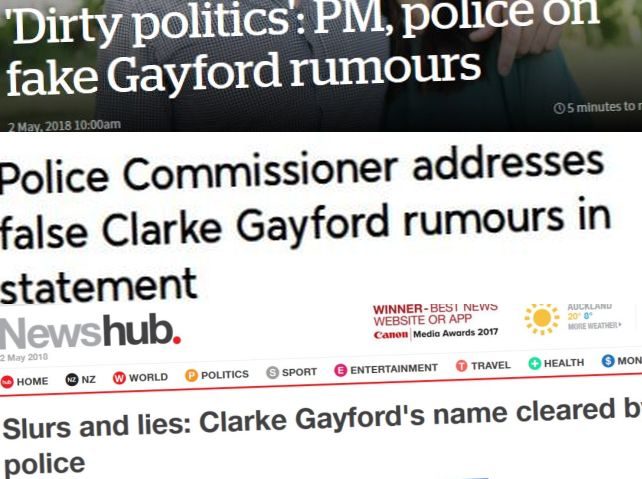 Prime Minister Jacinda Ardern responding to rumours about her partner as ‘dirty politics’?

The country’s top police officer making it clear publicly that Clarke Gayford isn't the subject of any investigation?

Definitely a story too.

But the nature of the rumours themselves made it a story that needed careful handling.

In recent months, the claims in question circulated by old-fashioned word of mouth and on social media.

Some who heard the rumours long ago might have already assumed there was nothing much in them because the story never crossed over into mainstream news.

But when it did this morning, it gave editors a headache.

After the New Zealand Herald broke the story, newsrooms received a lawyer’s letter putting them “on notice” that the rumours were defamatory and “any publication of the substance of the allegations... will result in proceedings being filed immediately".

It came from Linda Clark, formerly a TVNZ political editor and RNZ broadcaster who knows how newsrooms work.

The rumours were not repeated in news reports - or even hinted at - but reporting that they exist inevitably amplified them.

“After careful consideration, following thorough inquiries over a period of months, we felt it was important to address the fake rumours,” said Herald editor Murray Kirkness.

However, readers hoping for a hint of what kind of dirt was circulating were disappointed.

The Herald went out of its way to emphasise that the rumours themselves were not fit to print - or repeat.

Its investigative reporter David Fisher described them as “an unprecedented assault of baseless rumour and false innuendo”.

"Exhaustive inquiries by The Herald have found no substance to the false rumours," he said.

Stuff’s breaking news story said it had investigated several tips about Mr Gayford in recent months, “but found no evidence to substantiate any rumours.”

Under the headline: "Slurs and lies: Clarke Gayford's name cleared by police", Newshub reported it had received “a number of inquiries from members of the public” about what it called “a vicious rumour”.

“Police put an end to Gayford rumours,” was Newstalk ZB’s headline on the story.

"We are all going to justify following the story telling ourselves: 'It's now about how the PM reacts.' I'm sorry, but this is why everyone hates the media," she said on Twitter.

Return of the dirt?

The man who wrote the book on that - Nicky Hager - told The Herald the aim was to steer the public's political focus to personal issues that didn't even need to be true.

Herald political editor Audrey Young reckoned “dirty politics” was a politically loaded term in this case, which unjustifiably linked National to the rumour-mongering - and “stoop[ed] to the standards of the peddlers of rumour”.

But she also left readers in no doubt the rumours were not fit to print.

“The intention of the low-lifes in promulgating the rumours was doubtless to inflict maximum damage,” she wrote in The Herald.

If Mr Hager is right about distraction being one main aim, those promulgators might be encouraged to hear the country's biggest newsrooms “exhaustively investigate” such claims.

Former Herald editor Tim Murphy - on Twitter - reckoned the PM, her office and legal team could be “quietly happy” to have the rumours out “in the negative.”

“[It] gets the nonsense out there,” he said.

But today’s news stories mean more people know that rumours exist, but not what the “nonsense” actually is.

Other politicians have found partial revelations about their conduct no great help in the past.

In 2009, Richard Worth was the first ministerial casualty of John Key’s National-led government.

At the time they both stated he had resigned for personal reasons, but gave no hint of what that meant. There were allegations of sexual harassment later and Mr Key said he “lost confidence” in the minister  - and that his behaviour did not meet the standards he required.

When Mr Worth’s name crops up in political reporting these days it's always with reference to the unanswered question about his behaviour.

The rumours about Clarke Gayford may end up having a longer life than the headlines today, which say the police statement has put an the end to matter.