Media freedom under the microscope

New Zealand is back in the top ten in the annual rankings of global media freedom. That's not bad considering we plummeted down the ladder last year. But does that mean everything’s rosy?

New Zealand ranked fifth in the world in Reporters Without Borders Press Freedom Index in 2016 - behind only Finland, Netherlands, Norway and Denmark.

But last year New Zealand plunged to 13th in the 2017 Press Freedom Index. Reporters Without Borders cited government secrecy and journalists’ struggles with the Official Information Act (OIA) as the reason for the drop.

“Political risk has become a primary consideration in whether official information requests will be met and successive governments have allowed free speech rights to be overridden,” said Reporters Without Borders.

“[There is] consistent and cynical misuse of official information laws which are designed to assist the release of information, but are often used to withhold it," she said.

Why has New Zealand bounced back into the top ten this year?

"At the same time, investigative reporting should soon be strengthened by a law protecting whistleblowers," said RWB.

So with New Zealand being cited in the report as "a good example to follow" is everything rosy for media freedom in this country?

"The media continue to demand changes to the Official Information Act, which obstructs the work of journalists by allowing government agencies a long time to respond to information requests," said RWB.

It’s not a new concern.

Sometimes they share pictures of the heavily-redacted documents dotted with black blocks they’ve received in response to their requests. All too often they’ve had to wait far too long to get them for reasons that are rarely adequately explained.

Media management plays a big part in this. Delays take the sting out politically-sensitive newsworthy details.

But Matt Nippert pointed out the NZDF itself had already reported the relationship with Palantir in a its own publication, Army News. A December 2015 briefing on its website also detailed use of Palantir’s analytical tools, he said.

After refusing for more than a year to reveal the extent of links to the company, the Herald complained to the Ombudsman and the NZDF was finally forced to disclose the spending.

This past week, the Herald's David Fisher reported that other documents released by NZDF after the office of the ombudsman intervened showed former prime minister John Key had been given guarantees there were no civilian casualties during Operation Burnham in Afghanistan - the engagement that's now the subject of a government inquiry prompted by the book Hit and Run.

In this case the NZDF were willing to make the information public at the time, but a handwritten note on the front of the memo said: "PM and Minister agreed not to release this information into the media."

At an event called “The Moment of Truth” in the run up to the 2014 election, NSA whistleblower Edward Snowden revealed the existence of ‘Project Speargun’ - a plan to intercept internet traffic in and out of New Zealand.

John Key said he personally put a stop to this in March 2013 because it was too intrusive. He even said he would  resign if it was proved that he presided over mass-surveillance of New Zealanders.

“Speargun wasn’t actually stopped until after Key was told in a secret briefing that details were likely to become public because they could be in the trove of secrets taken by NSA whistleblower Edward Snowden,” he reported last December.

But it took almost three years to get the information he needed. John Key had left politics long before his story came out.

“What a shame it would be if the lesson of all this was that all you need do is waste enough time until everyone has something else to worry about,” said Toby Manhire on The Spinoff, hitting the nail squarely on the head. 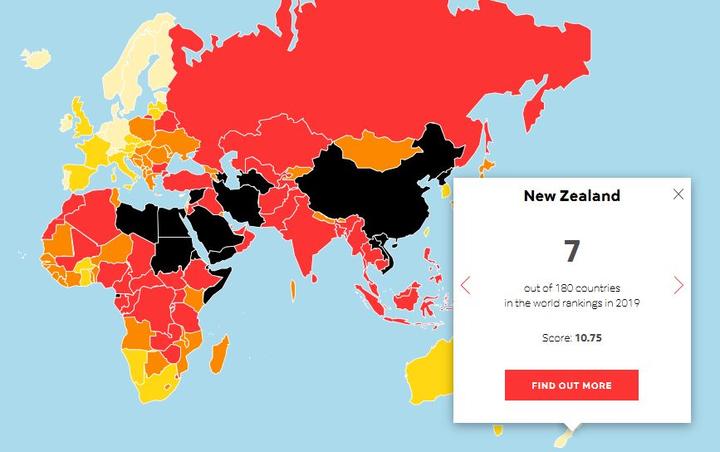 Sometimes this gaming of the OIA is itself revealed in the documents eventually released using its powers.

Transport minister Simon Bridges' office discouraged the release of a 2016 report about a proposed rail link to Auckland . The national rail company KiwiRail advised there was no case to withhold it from the public, but emails eventually released under the OIA last June revealed how Mr Bridges' office pushed back against the release all the same.

Reporters of local politics are familiar with this too. The Local Government Official Information and Meetings Act (LOGOIMA) requires local bodies to provide information unless there is a sufficiently good reason not to, but resistance for political purposes is commonplace.

In March, RNZ’s reporter Todd Niall revealed a letter to Auckland Mayor Phil Goff which said the release of information should be delayed so it could be "managed".

The letter was withheld from RNZ for 15 months despite intervention by the Ombudsman.

If the idea is to create “news that is so old it is not news any more” as Todd Niall put it, it works.

“And that is why it matters,” he added.

The new chief Ombudsman seems willing to force the release of unjustifiably withheld information and address complaints - many of them from journalists - more rapidly.  Peter Boshier has also started naming and shaming government departments dragging the chain.

He says the outcome of the investigations will be released in 2018 “to provide the public with continuing trust and confidence in public sector agencies, and to outline the standards to which government agencies should aspire.”

But will Jacinda Ardern’s new Labour-led government bring new management to the OIA too?

Before she could get her feet under the table, her government made a bad start.

It refused to release a coalition document with directives for new ministers, despite deputy Prime Minister Winston Peters’ promise it would be made public.

In the white heat of election campaigns gone by, politicians have called in the lawyers or even the cops on journalists doing their jobs.

During the 2017 election campaign New Zealand First Party leader Winston Peters  - now the deputy prime minister  - launched proceedings for a breach of privacy against two journalists who reported that he had been paid too much superannuation.

Mr Peters’ tried to get them to hand over several months of their telephone records, documents and notes as part of the proceedings targetting whoever was responsible for leaking the private information at the heart of the story.

New Zealand’s watchdog Media Freedom Committee - which represents the country's major news organisations  - was caught out. Its chair Joanna Norris had just left the media and a replacement had not yet stepped up when the case arose.

After a hasty new appointment, the committee’s new chair, Miriyana Alexander, said journalists had a fundamental right to protect their sources, and should be free to do their job of informing the public without interference and intimidation from politicians.

Mr Peters eventually excluded the journalists from his proceedings, but it’s not the first time Mr Peters has taken legal action against the media and there is - at the least - a chilling effect from his heavy-handed response.

Reporters and their editors who publish stories about Winston Peters which he might not like will know that they could be dragged into a legal battle which could even make them liable for costs.

Journalists at risk of jail

In 2017 a new law overhauling the powers of spy agencies created a new offence for people passing on classified information on a confidential basis.

The changes make it easier to people to make a ‘protected disclosure’ to the Inspector-General of Intelligence and Security - but those who pass information to journalists may face up to five years in jail.

This has yet to be tested, but it will be brave member of the intelligence services who leaks information on that basis. Journalists will also have the added worry of possible prosecution themselves if pressed to reveal sources.

Journalist can also be jailed for contempt of court if they jeopardise a fair trial.

A bill to tidy up the law on contempt of court is now before Parliament and it could introduce heavy fines for breaches.

When the New Zealand Law Commission launched a review of the law last August no reporters turned up. Only a handful of stories signalling the changes were published.

But statutory take-down powers for courts to order temporary removal of potentially prejudicial online material could land the media in hot water.

The Law Commission proposed new public interest defence where “the publication was in good faith made as a contribution to or part of a discussion of public affairs or matters of general public interest”.

That could be in the media’s interest, but its not in the Bill before parliament as it stands.

The new Government is also exploring whether the law to protect whistleblowers at work need to be strengthened.

Let’s hope any change to the Protected Disclosures Act 2000, recognises a role for the the media and protects people who pass on information to them where the public interest is in play.

For example, the New South Wales government protects people who contact the media if they have not had success having their "honest concerns" properly investigated by a relevant higher authority.

When asked why New Zealand had slipped from its fifth place on the World Press Freedom Index in 2017, the chair of New Zealand's Media Freedom Committee at the time, Joanna Norris, said the accelerating financial woes of the news media were the biggest concern.

"[A] challenge which threatens to undermine media freedom is the actual sustainability of professional journalism, which is costly and becomes increasingly hard to support as revenues decline or shift to offshore giants,” she said.

Her employer at the time, Fairfax Media New Zealand (since rebranded as Stuff), was seeking clearance to merge with NZME (New Zealand Media and Entertainment), the only other major newspaper publisher in New Zealand.

Without a merger, “journalism at scale” in New Zealand’s regions was at immediate risk, she warned.

Greg Hywood, chief executive of the Fairfax Media parent company in Australia, was more dramatic. He said it would "become endgame" if the merger was disallowed.

"We don't have the capacity of deep pockets of private money to subsidise journalism," said Hywood.

But in May 2017 the Commerce Commission, New Zealand’s competition watchdog, declined permission to merge.

The Commission said plurality and diversity of opinion would shrink - and that outweighed the economic benefits to the company.

The decision was announced on World Press Freedom Day, 3 May.

The prospective merger partners are challenging the decision - at considerable expense - in the Court of Appeal in June 2018.

If they succeed, the two companies may get the extra “runway” they say they need to establish a profitable digital era business model.

They insist they remain committed to journalism and publishing, but that model would employ fewer journalists than the two companies do now and accelerate their ‘revenue diversification’ strategies: sidelines in insurance, video-on-demand, retailing broadband and events.

In other words, the single slimmed-down company would dominate daily news in print and online, yet journalism would not be its bread and butter.  The word ‘news’ no longer features in the current names of either company.

And it is conceivable that before long, another owner  - possibly from overseas - could acquire this single company, that has no commitment to journalism at all.

One worried executive told me this year: “Proper news media companies need to be strong enough to tell governments and other companies to f--- off.”

If they are not, the implications for media freedom are obvious.

This is an edited version of an article in the annual review of Asia-Pacific media freedom to be published on world Press Freedom Day (3 May) by the union representing journalists in Australia - the Media, Entertainment and Arts Alliance.