The awards for the best New Zealand journalism have been sponsored by a global camera-maker, a paint firm and even Australia’s national airline in recent years. Now a local ISP is picking up the tab. Voyager boss Seeby Woodhouse tells Mediawatch he's been spooked by what he's seen in the US - and he wants our media to up their game. 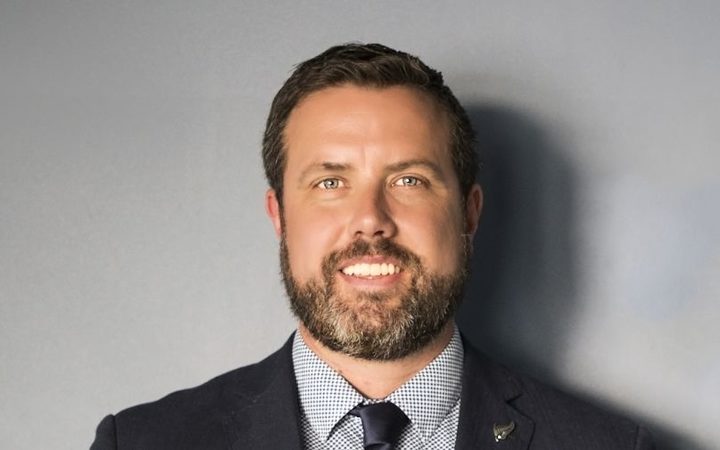 This week the 2018 Pulitzer Prizes for journalism and the arts were handed out and the quality of journalism at local papers in the US won praise.

A searing multi-media series in The Cincinnati Inquirer - Seven Days of Heroin - was "riveting and insightful," the judges said. A "vivid and timely" Arizona Republic series about President Trump's pledge to wall-off the US from Mexico won the prize for explanatory reporting.

But the papers honoured for top-notch work also face a struggle to survive. Just last week the Denver Post drew attention to how few of its Pulitzer Prize-winning reporters from 2013 remain at the paper today after years of cuts and lay-offs by profit-driven owners. 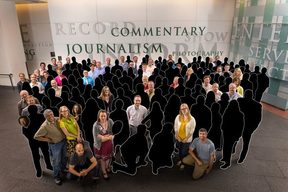 A photo of Denver Post staff in 2013 after the paper won a Pulitzer prize. Those in black have left the paper or been made laid off in the past five years. Photo: screenshot

But there still seems to be plenty of money in biased broadcasting in the US - and that's partly the reason a cashed-up online entrepreneur decided to back New Zealand's main journalism awards which will be handed out next month.

Seeby Woodhouse made millions in 2007 when he sold the internet company Orcon, which he had founded as a young entrepreneur.

The terms of the deal kept him out of the online market here for three years. He spent six months a year in the US and  - when not driving too fast or partying too hard - grew increasing alarmed by media bias and political polarisation there while planning his second internet company.

"As an internet company, Voyager is a distributor of media and I am interested in where things are going" he told Mediawatch.

"With Trump, the Russian meddling and even authoritarian movements on the rise in Europe, it is important to have a strong and independent media. The fake news is a threat and so are the corporate interests. Fox News is not giving a real picture of events. In the past media organisations (in the US) would all report on major things going on. A third of Americans back Trump and if they watch Fox TV they're not seeing anything about the scandals he's involved in or bad things he's done," he said.

"Everyone is in their own bubble silo and social media magnifies existing views. I love the US but it's worrying where it could end up. I believe a strong an independent media is important for democracy and I'd like to support that in New Zealand," he said.

But backing the awards is not just philanthropy - it's also marketing that piggy-backs on the media's ability to promote themselves.

"Sponsoring the media awards is a good way to get our name in front of more people and also have a dialogue about the media an technology. There's lots of places I could spend my advertising money but this fits with my own thoughts," he said.

And Seeby Woodhouse is not just slapping our media on the back. Indeed some of his views on them are a bit of a slap in the face.

"I listen to podcasts, watch educational videos from the likes of Unfiltered, TED and Creative Live, read magazines like Wired, and use Twitter, mainly for news," he replied. 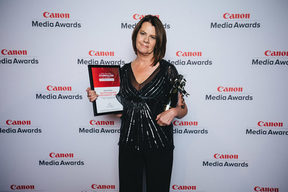 "I don't want to bag our entrants but I've been disappointed by the likes of the Herald and Stuff," he told Mediawatch.

"I used to have them on my (phone) but ... the last time I was on the Herald I saw a story about the Kardashians. Why is a New Zealand newspaper reporting some clickbait about the family? I think it's adding to global mental retardation (having them) in the news," he said.

"Both of them have become more involved with driving traffic and clicks. News organisations have fallen into that trap and charging advertisers for clicks-per-thousand views. I think the quality of Herald and Stuff has fallen dramatically," he told Mediawatch.

But much of the most significant investigative reporting in New Zealand is published by the Herald and Stuff. A glance at the The Voyager Awards finalists' list released last month shows that - and also, that lots of other important journalism is still being published by news media companies that are under financial pressure.

"The media has a responsibility to report important things. I'm not sure I am happy with how they're being covered but the media here is still better than a lot of other countries - including the US," he said.

The 2018 Pulitzer Prize for investigative reporting went to a newspaper in the US owned and funded by an online billionaire businessman.

Great reporting requires patience, grit and a willingness to follow a story wherever it leads, whether Alabama or Moscow. Proud of @washingtonpost #Pulitzer winners! And big congrats to the @nytimes, as well! #DemocracyDiesInDarkness https://t.co/MBMWhh1cQR

Will Seeby Woodhouse follow the lead of the Amazon founder and actually invest in a journalism - rather than just awards?

Also, new news start-ups like Newsroom and the Spinoff - up for awards in several categories at The Voyagers next month - rely heavily on sponsors and donations.

"I don't think it's necessarily good for really wealthy people to own news organisations. It creates a long term conflict of interest problem. I won't rule it out but if I ever do become involved in sponsorship or ownership I'll do it in an impartial way," he said.