Labour’s ten-year plan for transport had a lot in it for the media to explain, but coverage focused on political claims and counter-claims about tax - and complaints about pain at the pump over the price of petrol.

Once it was clear that petrol excise would go up, opponents went on the attack in the media.

"This is not going to improve our roads. This is about putting a trolley system in Auckland and putting in some cycle lanes. If this was actually taxing motorists to improve our roading and motorists could see that connection that would be a different debate [but] that's not what we are talking about," opposition finance spokesperson Amy Adams told Mike Hosking on Newstalk ZB.

It is a major shift being proposed: spending on public transport, safety and regional roads as well as the big roads in or near the big centres. The National Party went into the election promising to spend billions on what it called Roads of National Significance.

But much of the media coverage zeroed in on the fact that drivers would pay more for petrol, and they wouldn't like it.

News report after news report pointed out it would be a "double whammy" for Aucklanders, who may be paying a local levy soon as well.

Inflating the indignation of opponents was the fact that Labour had promised ‘no new taxes’ in this term. Prime Minister Jacinda Ardern countered this was an adjustment to the excise rate - not a tax.

"It's smoke and mirrors. If politics is about perception, the perception is Labour is going back on its word," Newstalk ZB political editor Barry Soper said on Tuesday.

He went on to point out the previous government increased the petrol excise several times too when in power.

"In fairness to Labour, raising the petrol excise tax isn't a new tax anymore than raising alcohol and tobacco levies is. In their election policy manifesto, there for all to read, they mentioned all three taxes saying they'd be adjusted, which is the normal government practice," Barry Soper wrote at nzherald.co.nz.

"If it's any consolation, New Zealand comes in at the fifth lowest excise tax on fuel in the OECD," he added.

This did not seem to console his fellow commentators at ZB and its stablemate the Herald.

"I can't believe how crap the PM's argument is. It's a tax!" Heather Du Plessis-Allan wailed on the ZB Drive show.

"This is the day Labour lost the 2020 election," she insisted - on the air at ZB and in written pieces for the Herald and Newstalk ZB websites, both of which were pushed out as "breaking news."

Along with the mantra that 'perception is everything,' that was absolutely by the numbers political commentary these days: more tax must equal fewer votes equals dumb politics. Political management is paramount, otherwise it's electoral suicide. 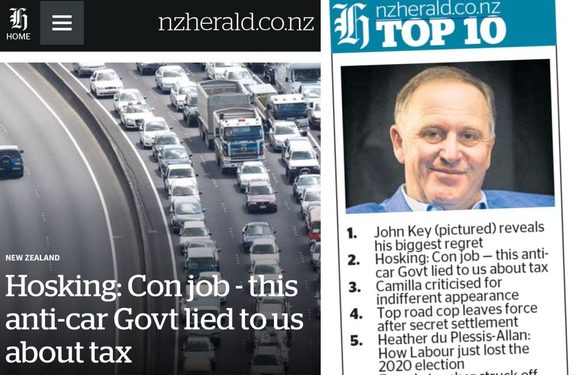 The anti-petrol tax opinions of two hosts at Newstalk ZB harvested the clicks for its stablemate the Herald. Photo: screenshots

Mike Hosking said it was a fraud fueled by car-hating ideologues, again in The Herald as well as on Newstalk ZB. NZME also broke out the red 'breaking news' banner for that - under the heading 'Con Job'.

Mike Hosking told ZB listeners users of public transport should bear the cost of providing their services, not drivers who already pay for roads and more.

Mike Hosking overlooked the fact road-building is subsidised heavily from the public purse already, and that most public transport users, cyclists and pedestrians are also car-owners and drivers. And cars have an impact far beyond just the roads they travel on.

If drivers paid the full cost of the space the take up and the services they need - especially in cities - only millionaires in Maseratis could pay the bill. And that’s without even considering the contribution private cars make to pollution and national household debt - though no-one else in the media coverage of the policy focused on those aspects either.

There was a rare counterview outside Auckland though.

"It is a win for evidence-based policy making, as study after study shows that building more highways adds to traffic jams rather than solving them:"If we all have to sacrifice a little convenience and speed to make those roads safer, it is a trade-off that will be worth the cost," said Christchurch daily The Press, in an editorial headed The upside of paying to fix Auckland's traffic woes.

But those looking for a rebuttal from NZMEs Herald / ZB stable got one on Saturday: 10 pieces of nonsense they're talking about transport by Simon Wilson.

On Mike Hosking's view petrol tax is "for roads and bridges," Simon Wilson said it's actually a tax to be spent on land transport.

He also pointed out the new policy allocates 78 percent of transport funding over the next 10 years to roads. Public transport gets 21 percent and walking and cycling just 1 percent of the spending.

On Saturday, a trip on a train seemed to persuade Heather Du Plessis-Allan the coverage of the policy has been inadequate.

Labour's copped a lot of flack for their petrol tax - which they deserve. But it also means we haven't given them enough credit for their actual policy, which will put more money into public transport. Trains are great. (Written on a train in Auckland) pic.twitter.com/rc9Hy1yPol

Just last month he said the only thing that would get New Zealanders out of their cars would be petrol hitting $3 a litre.

But last Friday, he seemed persuaded by a story in the Herald in which the general manager of car-maker Volvo said a combined price hike of 25 cents over three years would make Aucklanders switch to electric cars.

If hostility to Labour’s proposal to jack up petrol excise nationwide ends up pushing it off the agenda, it’s highly likely local authorities will end up applying local levies anyway.

What would opinion leaders channeling the nation's angry motorists make of that?

"The debate has been sound-bited into "punitive taxes", "robbing the regions" and "penalising motorists". None of those things are true," said Simon Wilson in the Weekend Herald.

"How are we going to face up to the big difficult issues if politicians and commentators prefer the lazy option of easy trash talk?" he asked.

A good question for the editors at NZME.