The private visit of former US president Barack Obama got blanket coverage this week, even though he blanked the media and said little of substance. 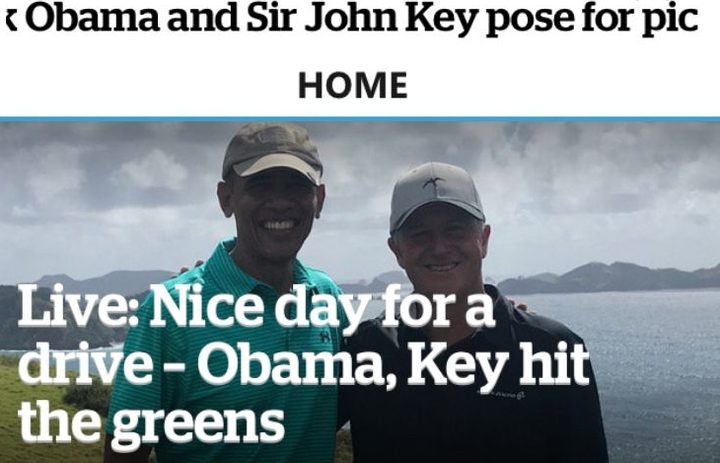 The New Zealand Herald rushes out news that a photo had been taken. Photo: screenshot / nzherald.co.nz

Political reporters were bitterly disappointed Barack Obama didn't want to to talk to them during his visit.

Even though he was officially welcomed and meeting Jacinda Ardern, it was a private visit bankrolled by corporates and he wasn't obliged to talk to anyone else.

On the eve of his arrival Newshub's Patrick Gower revealed the organisers insisted on a blackout beyond news media to social media for his invited guests at his behind closed doors events.

But, as Patrick Gower pointed out, Barack Obama had good reasons for keeping headline-hungry reporters at arm's length.

"Any utterance could cause political instability not just in the US but around the world. He has said hardly anything and done hardly any interviews since he left office over a year ago," said Patrick Gower.

But why were our media so excited if he was unwilling and unlikely to say anything interesting?

And they were certainly excited.

"Obama is coming!," it shrieked.

"It seems like we’ve been waiting for this moment for years. Barack Obama won the US election in 2008, and since then, this little country has been waiting its turn to get a glimpse of the influential leader in the flesh," it said.

"He was a class act and still is. It is an honour to have him here," said the New Zealand Herald on Wednesday.

From the moment he touched down the media tracked his every move - from a distance.

Every event  - and nearly every beverage  - was reported on breathless but boring live blogs and in some pretty boring reporting that went on all day.

Over nine long minutes that morning, former PM John Key told the AM Show this was money well spent by the sponsors such as Air New Zealand, of which he is a director.

(Is any photo of any celebrity on a golf course ever truly iconic?)

Later in the afternoon The Herald put a breaking news banner on a posed picture of John Key and Barack Obama on the Kauri Cliffs course. The picture had already been tweeted by Air New Zealand and turned into news - with Air NZ branding included - by TVNZ.

By Friday, the picture had only 44 re-tweets and garnered just 308 likes from Air New Zealand's 663,000 followers.

"If it all works as it supposed to Barack Obama will wing a club . . . Insta it to the world and everyone will see it and book a holiday here," Mike Hosking said on Newstalk ZB that morning  - after he put in a plug for the golf course.

But his Newstalk ZB colleague Andrew Dickens reckoned that was unlikely.

"Over the past year, he’s posted no pictures of any place he visited. Same on Facebook. The tourism boost from Obama has been overblown.," he told listeners.

"Obama has just spent two days in Singapore but I haven’t seen the world’s media covering the crap out of it," he added.

Andrew Dickens on Newstalk ZB was almost a lone voice when he said Barack Obama was irrelevant.

"Let’s be frank. This is an Air New Zealand promo for New Zealanders organised by Sir John Key who is on the Air New Zealand board. It’s no wonder they’re playing at Kauri Cliffs and not a Paraparaumu where Tiger Woods played because there’s no way Barack Obama could fly into the Kapiti Coast this week," he added.

The media’s self-generated Obamamania seemed to wear off during day two of the tour.

Mike Hosking rated Barack Obama’s big dinner speech in Auckland only "4 out of 10" and on Three's The Project Patrick Gower said he “sick of watching rich guys play golf.”

That may have been tongue in cheek, but he wasn't alone.

Somehow the Barack Obama visit and accompanying coverage and commentary is more embarrassing and cringeworthy than a royal tour.

The Herald's Matt Nippert posted the most-viewed stories list from Stuff - the country’s most visited news website - to show that at 6pm on Thursday, none of the top ten were about Barack Obama.

It was the same for the most-shared stories list, though one of the top ten 'most-commented' Stuff stories was about the visit: Should Barack Obama get red-carpet treatment for his private NZ trip?

Plenty of people commenting said 'no'.

But what about the payback in the form of all that precious overseas exposure for New Zealand?

As of late Thursday night, Mediawatch could only find one overseas report online: an AP news agency story on the site of US News and World Report, which was illustrated with a not very scenic picture of Barack Obama about to board a chopper.

But far-right broadcaster Alex Jones - prime mover at the infamous online platform Infowars - had seen it too.