Labour’s summer camp scandal triggered a flood of opinion in the media this past week. Much of it claimed political spin had overridden the rights of the victims, but the coverage and comment also made it an even more political story. 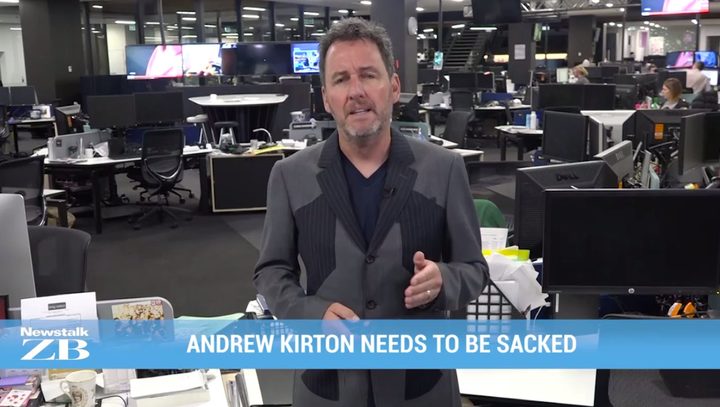 Mike Hosking's call for the sacking of Labour's general secretary was widely aired by Newstalk ZB and the New Zealand Herald. Photo: screenshot

What happened the night when four sixteen year-olds were allegedly sexually assaulted by a 20 year-old at a Young Labour summer camp party back in February - and how the Labour Party handled it - was in the headlines all week after online news outlet Newsroom broke the story last Monday.

In one of many editorials about this, the Otago Daily Times pointed out it wasn’t just what happened that night that has preoccupied the media this week - but what didn't happen next.

"The things which did not happen include Labour Party general secretary Andrew Kirton not telling the parents of the young people, not notifying the police of the allegations and not informing Prime Minister Jacinda Ardern, who was apparently caught unawares by the allegations when questioned by the media," the ODT said.

On RNZ's Checkpoint, the Labour Party's secretary general Andrew Kirton stood by what he called a “victim-led” approach, which meant not telling more people - including the PM.

While the 'keep the circle small' approach was backed up by two sexual abuse support organisations few in the media seemed to agree.

The New Zealand Herald’s political editor Audrey Young said it was "crazy" to keep the PM out of the loop.

“He had higher obligations than just to the victims. To ignore the political dimension of the allegations is to deny reality," she wrote.

But while she said it was not a sacking offence, plenty of others disagreed.

"Instead of using common sense, they used a so-called professional to get advice. Who thinks that way? If I am in charge of kids, I think for myself," he told his listeners on Newstalk ZB.

There was little danger of not knowing what Mike Hosking thought.

His ZB comment piece was recycled online as a Mike’s Minute video which was attached to several online stories about this issue, written by others for ZB and the Herald online with the heading: 'Andrew Kirton needs to be sacked'.

It was also on the Herald's website as an opinion piece, where it appeared alongside the thoughts of his wife Kate Hawkesby, who precedes him on ZB's Early Edition.

"I don't care what any 'expert' says, no one cares more about that child than its parents," she said on air and online.

After Jacinda Ardern herself admitted the party's care of the four teenagers had not been not good enough, Tim Murphy - co-editor of Newsroom website, which broke the story - tweeted that Andrew Kirton's position must be untenable.

But on Three's show The Project, former Labour Party president Mike Williams - who said he set up such camps in the past - insisted Labour's top brass should not have to quit.

"These camps have been run smoothly for 17 years. It’s a really bad look for a political party but at the end of the day it was one drunken idiot," he said.

The Dominion Post raised the question of whether the party’s slow and softly-softly approach was what Mike Hosking called “butt-covering politics”  - but didn't seem to want to answer it.

"We'll leave readers to draw their own conclusions on that," The Dominion Post's editorial said.

But the DomPost was certain the police should have been told at the time.

"The party usurped the role of the law enforcers in deciding what may or may not be criminal activity," the paper said, also insisting the Labour Party should have told the parents of the teenage victims.

"Society sometimes struggles with this concept, but parents still have a role to play in their children's life. Possibly a right."

But not according to Newstalk ZB's political editor Barry Soper:

On the ZB website, he said the law actually prevented Labour Party from telling anyone else if that’s what the victims themselves wanted.

He said only two of the four victims replied when contacted by Labour, just one of them wanted to pursue the matter, and none of them initially wanted their parents involved.

"Kids aged 16 have more rights that you may realise, like where they live, when to leave school, to get a firearms licence, to have an abortion without their parents knowing or even to get a passport without asking mum or dad. Whether they're old or mature enough to have such responsibility is for the lawmakers to decide," he wrote.

Kate Hawkesby was not at all happy about that on Newstalk ZB  - and in the Herald - the next day.

"The bulk of laws like this appear to be designed to cater to the lowest common denominator. I think that’s a problem."

"The lowest common denominator is the minority. If we structure our society around pandering to the smallest group of people, then are we not failing the majority?," she said.

Labour was “hiding behind the law” for “political management” reasons - and it needed “to humanise” its approach, she said.

Yet just the day before on the air she folded the teenage victims’ plight into the matter of party politics.

“Ardern and Kirton are peddling the line of defence [that] informing the PM would've been a ‘political management response’, instead, they were focused on 'the people not the politics’. Wake up. The people are the politics and vice versa,” she said.

After the PM faced more questions about the this on Newshub Nation on Three, panelist Ben Thomas - a former press secretary turned PR professional - also said the young people affected and the political handling couldn’t and shouldn’t be divorced.

But he also said so-called “‘politcal management” need not be the same as cynical spin.

“Political management is just making sure that everyone in an issue is being taken care of and feels like they’re being heard, cared for and supported so no one has a grievance coming out of it,” he said.

“If there was mismanagement it happened here at the point the victims came forward to Andrew Kirton and the Labour Party and their concerns were not adequately dealt with,” he said.

Labour‘s leaders’ eventually acknowledged they let the victims down by not responding quickly enough.

The revelation that Labour only followed up with the victims three weeks later, just before the story broke, aroused suspicions that that was an exercise in damage control rather than doing the right thing.

But on Scoop.co.nz, Gordon Campbell made this point:

“There is something a bit off about the media raising this matter as if everyone else was acting out of self-interest, while its own motives – and the possible impact of media coverage on victims who had previously expressed their desire that the events not be publicly disclosed – are seen to be above question,” he wrote.

The revelations triggered a flood of opinion in the media, some of which claimed cynical political spin overrode the rights of the victims - without making it clear what those rights really were, and that some of the victims appeared to exercise them independently.

The media themselves played a big role in making this a political, rather than a personal or social story.