The country’s biggest publisher of news is preparing to close or sell many of its rural and community newspapers around the country. Mediawatch looks at the reasons why and what it might mean for the media.

Three of the 28 local and rural publications Stuff wants to close or sell by the end of the year. Photo: PHOTO / RNZ

When John Campbell called Big Mama’s cafe in Taumaranui earlier this month for Checkpoint to find out how people were coping in the heatwave, he ended up speaking to Ruapehu Press reporter Frances Ferguson.

In the absence of an office there, she said she spent regular hours in the cafe talking to locals about what was happening locally for the weekly paper. She also told Mediawatch other reporters at Stuff’s community papers do the same.

The Ruapehu Press is one of 28 titles that media giant Stuff (formerly Fairfax Media) now wants to close or sell by the end of this year.

Another on the list is the Kaikoura Star, whose reporter Emma Dangerfield was choppered out of the region to safety with her children only after a special edition of the weekly paper went out.

That achievement was rightly trumpeted at the time, but it is now unlikely to be repeated.

The closure of the community papers means more than just local people missing out on a free weekly dose of local news  - and the chance to chat to a reporter in a cafe. 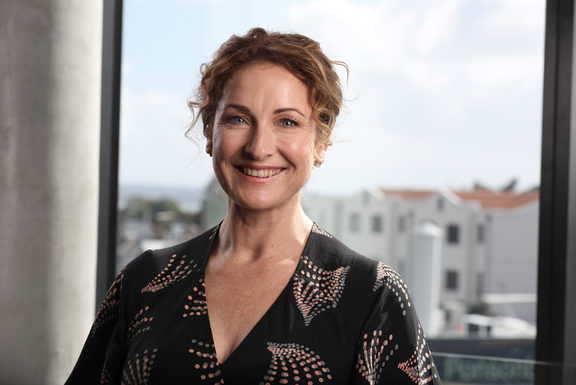 Readers of Stuff's Rotorua Review will still be able to buy the Rotorua Daily Post published by rival NZME, but some of the papers that will close are the only game in town for truly local news and the only employer of local journalists.

"This is not about pulling out of communities. We are still absolutely committed to covering communities and rural news via Neighbourly and Stuff," Stuff chief executive Sinead Boucher told RNZ today.

"In this day and age not all printed products are economic any more. We have signaled that for quite some time  - and that the mix of our portfolio would change," said Boucher.

"We need to continue to act decisively in transitioning our business model into an increasingly digital business." Boucher said in a statement.

Stuff reported its first-half financial results for 2018 today show overall revenue falling but the proportion of revenue from sources other than print has risen to 17 percent.

She said about 60 staff could be affected, and the company would be talking with staff in the next few weeks.

If the journalists among them are not retained to feed Stuff's news website and the company’s social site Neighbourly, the country’s biggest news publisher will have big holes in its news gathering network.

Though sudden (the staff had no warning) Stuff’s move is not a bolt from the blue.

Throughout its so-far unsuccessful bid to merge with its main rival NZME, Stuff executives have warned that regional journalism is at risk. 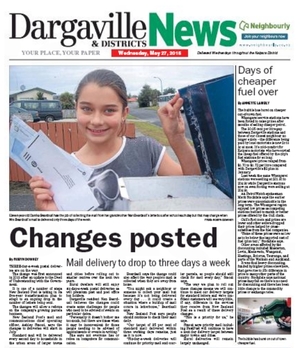 Stuff's local paper in Dargaville was one of the first to go, back in 2016. Photo: screenshot

“We believe - no, we know - that the rapid dismantling of local newsrooms and journalism at scale in this country is inevitable if this merger does not proceed," they warned in November 2016.

But long before that, the company had embarked on a digital-first strategy that meant many locals papers were on borrowed time. Many of the community papers are also less 'local' than readers might think.

A 'Community Newsroom Restructure' in 2016 led to community newspaper editors being replaced with regional news directors with broader reach. 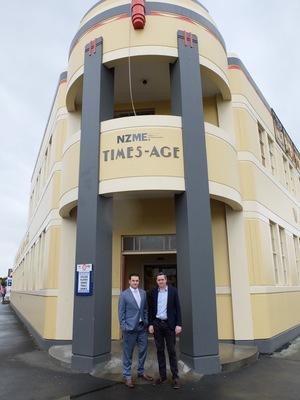 While some of the local papers on Stuff’s list will disappear, Boucher told RNZ "several expressions of interest" had already been received from potential buyers.

She had some idea of which would be likely to close and which could be sold, but would not reveal them. Some papers may be bought by local entrepreneurs - and could thrive.

A recent Australian survey of New Zealand’s independent local newspaper publishers and found them “generally buoyant about the future of local papers” and pulling $52 million in advertising per year. The 80 plus independent publications also now have a national online platform too: newsie.co.nz

The Wairarapa Times Age was sold by NZME in 2016 and bought by its former general manager.  It’s still going strong as a paid-for daily paper.

NZME also sold the Oamaru Mail to Allied Press which made it a give-away community paper. The Whakatane Beacon and Ashburton Guardian have launched paywalls, suggesting there may be alternative revenue for independently-owned local newspapers.

The downside of newspapers returning to local ownership could be the gutting of the closest thing New Zealand has to a truly national news service: Stuff's journalists dotted around the country.

Even if Stuff does find what Boucher calls "loving new owners" for its unwanted papers, a commitment to news and journalism can't be taken for granted.

Publications to be sold or closed by Stuff: