Hate speech vs free speech in the media

Claims of hate speech and the right to free speech made the news this week in response to racially-charged commentary in the media. One case played out in the court of public opinion, the other in a court of law. What does the outcome tell us about what’s fit to print - and what’s not? 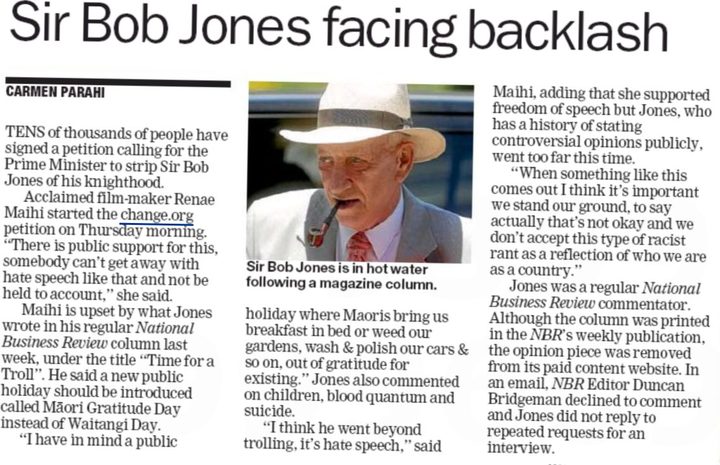 One of many stories about the controversy stirred up by Sir Robert's reflection on Waitangi Day. Photo: screenshot

Sir Robert Jones' controversial column about "Maori Gratitude Day" didn't seem to ring alarm bells at the National Business Review when they prepped it for the weekly paper last week.

"As there are no full-blooded Māoris in existence it indisputably follows that had it not been for migrants, mainly Brits, not a single Māori alive today … would have existed,” Sir Robert wrote in the column.

By adding the handy heading "Time For a troll', they seemed well aware his words would wind some people up, but decided they were fit to print nonetheless.

It was only after the weekly paper hit the shelves that the solids hit the air conditioning.

The Spinoff reported NBR later decided to can Sir Robert's column for good, and an NBR source was quoted as saying “approximately 100 percent of NBR editorial staff” approved of the move.

Sir Robert Jones gave a long interview to Radio Live last weekend in which he said he would sue Renae Maihi for defamation  - and that then became the story the media followed up.

The author himself insisted his words were simply satire, and you'd have to be stupid not to know that - and Sir Robert had enthusiastic backing for going legal at Newstalk ZB last Monday.

Kate Hawkesby said Renae Maihi was wasting her time, and on his show an hour later her husband Mike Hosking did a little trolling of his own.

"The poor woman who launched this petition ... didn't look like she read the NBR. She would have been alerted to it undoubtedly by social media by fellow 'angsties' she shares time and fury with. Nor did she look old enough to understand who he is, what he has done and how this column is no different - broadly speaking - to what he's been doing for 50 years now," he said.

Larry Williams joined in on his Newstalk ZB Drive show later on.

In the Dominion Post, columnist Dave Armstrong saw an irony.

"This threatened legal action makes the wannabe NBR satirist look just like all the wimpy, bureaucratic, tan-shoe-wearing, schoolteacher-types that Bob used to rail against. Real satirists don't sue; they get sued," he wrote.

Meanwhile it remains to be seen if Sir Robert does go to court - as he has done in the past  - over that claim of ‘hate speech’.

Defenders of his right to write what he likes for the media might wonder whether a man of means threatening punitive legal action against critics is in the spirit of free speech.

Among those putting in his two cents on this controversy was Christchurch cartoonist Al Nisbet, with a cartoon about the matter in The Press.

Twenty-Four hours later, he was also in the news over claims of "hate speech" because of cartoons he drew four years ago for The Press and Marlborough Express.

These featured caricatures of overweight Polynesians celebrating free food in school programmes as an excuse to spend more on "booze, smokes and pokies". 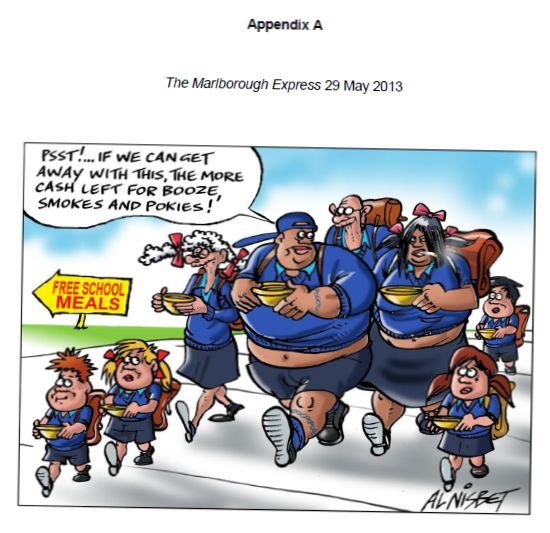 Labour MP Louisa Wall claimed (PDF) the cartoons had breached the Human Rights Act by showing Māori and Pasifika as "welfare bludgers and negligent parents". This week a High Court judgement (PDF) said the cartoons were “objectively offensive” but not actually illegal because they didn't hurdle the high bar of exciting hostility or contempt.

It was the first time so-called  ‘hate speech’ provisions in the HRA had been tested by something the media published.

"It's a high test. It's got to be 'likely' to have the two very serious effects of hostility or contempt," she said.

"The idea is that more speech is better than no speech," Ursula Cheer said summing up.

So does that mean media have carte blanche to publish racist sentiments - and so-called snowflakes will have to swallow it - satire or not?

The judgment made a point of saying the public can use their right to free expression in such cases too:

"We consider that the opportunity for intermediate correction  . . . is a relevant aspect of context. And in New Zealand the inevitable and almost immediate “push back” that a cartoon depicting racial stereotypes will generate is exemplified by the reactions in this case. And so we ask, with that in mind, are two negative cartoon depictions of Māori and Pasifika like(sic) to excite even persuadable people to hostility or feelings of contempt towards the target group? We do not believe so.

The judgment also said the publication of "objectively offensive" cartoons should "be a cause for reflection by the respondents and their respective editorial teams".

NBR seems to have done so already by withdrawing Sir Robert’s piece online and then cancelling his column.

Supporters complain that amounts to censorship or the silencing of a man who wants an audience for his views, but it turns out he has a new publisher already  - Whale Oil blogger Cameron Slater.

On Monday Slater announced Sir Robert's opinions would appear on his subscription-based website Incite which publishes opinion pieces by pundits from the left including Chris Trotter and former Labour staffer Phil Quin, and from the right such as David Farrar, political consultant Simon Lusk and Slater himself.

"I will contribute you items; as things take my fancy, in the style of the NBR stuff. Think of a title such as “Thoughts from Bob” or “Bob’s Corner” -- whatever. I’ll send some next week," Sir Robert wrote in an email published on Whale Oil.

Meanwhile, controversial cartoonist Al Nisbet’s stuff can still be seen on the pages of Stuff's papers.

After Waitangi Day, one of his appeared in The Press showing a government bulldozer jamming stacks of banknotes into a open-topped marae stuffed so full of cash its walls were about to collapse.

No sign there that the controversy and legal challenges have deterred him from producing portrayals of Māori as a drain on the public purse - or his editors being unwilling to publish them.