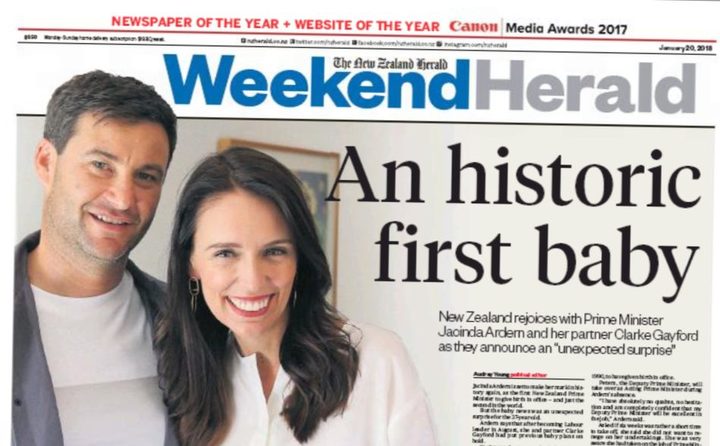 How the Weekend Herald marked the big news from the day before. Photo: PHOTO / RNZ Mediawatch

Decent news stories were pretty thin on the ground after Christmas, as usual in the holiday season.

The sudden appearance of a builder's portaloo outside the kitchen window of a disgruntled North Shore man filled the front page of the Herald on Sunday on the 14th of January.

But six days later, the Weekend Herald's front page was filled with a pregnancy deemed "historic". The couple's popularity was tipped to "explode globally," the paper said.

Last year some pundits exploded when Jacinda Ardern was quizzed twice on TV about her pregnancy plans within hours of landing the Labour leadership.

Radio talkback hosts braced for public anger and anxiety the day the PM broke the baby news on social media, but they found few callers in that mood.

Newstalk ZB's Kerre Woodham said some "cranky and misogynistic texts and emails" came in, but most listeners were happy for the happy couple. Most it seems were also happy to uncouple politics from the baby news.

"All right, time to roll up the sleeves and get ready for one HELL of a wave of sexist concern troll bullshit against our PM," left-leaning commentator Stephanie Rodgers wrote on Twitter, anticipating a politically-motivated backlash.

However, in a subsequent opinion piece for RNZ.co.nz, she revised that.

“Then I saw some of the responses she received: thankfully a minority among an overwhelming outpouring of congratulations and aroha,” she wrote.

There wasn't much of a tsunami of sexism on Twitter either, according to investigative journalist Tony Wall.

FFS Twitter has turned into a giant woman’s magazine

Newsroom.co.nz’s Anna Connell wrote that some commentators had taken "pre-emptive strikes against critics and questioners" who she reckoned fell into two camps.

“There are the mother-haters, misogynists, sexists, religious opportunists, and those who are barely concealing their partisan perspectives beneath their worries for the country," she wrote.

"Then there are those for whom the progressive march onwards feels too fast. The well-meaning and the worried who are perhaps over-awed by the task ahead for Ardern and Gayford,” she added.

But much of the comment published in the mainstream media was in stark contrast - hailing the pregnancy as an inspirational moment, especially for the younger generation.

Writing in The Press, Chris Trotter reckoned older New Zealanders could celebrate it too:

"This was the generation, after all, who had heard the dominant political figure of their day, Prime Minister Robert Muldoon, declare: "Could we contemplate the situation where a woman getting equal pay is the bread-winner, and the husband stays at home and looks after the children? I don't think we could," he wrote.

But while the 'critics and questioners' were few and far between in the media, they were not ignored.

"No one has thought about the babies. All I hear is what the mother wants, she should have, clearly at the expense of the child," Auckland-based company director Brenda Boyer write in the Herald under the headline 'The PM's pregnancy is not good for women."

She was echoed by UK commentator Liz Jones, who called the pregnancy "a betrayal of New Zealand voters" in the Daily Mail.

The Herald and Stuff.co.nz ran stories about her blurt, as did Newshub under the heading "Jacinda Ardern defends herself against columnist's stinging attack" when the AM show asked for her response.

"I hate to give this oxygen . . ." said host Amanda Gillies, awkwardly asking the question.

Why bother? Very little of what Liz Jones wrote was about Jacinda Ardern or New Zealand. It was mostly a takedown of British mothers the contrarian writer knows and loathes closer to home.

Fronting up and unwanted advice

After the announcement, the couple spoke to reporters in their home. The Herald rushed out its interview out as 'breaking news':

Exclusive: Jacinda Ardern and partner Clarke Gayford sit down to discuss their pregnancy

Exclusive: @heraldnz sit down interview with people that then continued sitting while other media came to interview them https://t.co/S3rEyAEmYj

Among those sitting down turn in their lounge was Three’s show The Project, but there was no mention of the fact that show's own Jesse Mulligan was one of those who asked Jacinda Ardern last year if babies might get in the way of her political leadership.

The Project's studio guest that night Jacqui Brown plugged her own book of advice for new mothers and she was far from only one offering unsolicited advice from the media pulpit.

Newshub;s website published a long list of tips for Clarke Gayford, while the Guardian had more hints for the stay-at home-dad in-waiting in the form of a so-called open letter:

"Here’s what to do, Clarke. Go for lots of walks, in nature. Give your partner back massages on demand. Listen to her – the country’s – woes. Make her laugh. And when the big day comes, grip her hand, not too tight. Stroke her hair. Whatever she asks.

- Mark Broatch in The Guardian

What could be less welcome for a nervous new dad than intimacy advice shared with a global online audience?

Duncan Garner also wrote a cloying open letter to the couple in The Dominion Post.

"Protect the little cherub as much as you can. This is not a normal situation. Set the rules and expectations early. I actually have faith that most of the New Zealand media won't step over the line," he wrote.

His faith is touching, but where is that line?

Will it affect ongoing political coverage?

"Every post-cabinet press conference in the next six months the Press Gallery will ask a baby related question - regardless of the other important issues of the day," former ministerial adviser Brigitte Morten predicted on RNZ.co.nz.

Worrying, if it turns out to be true. 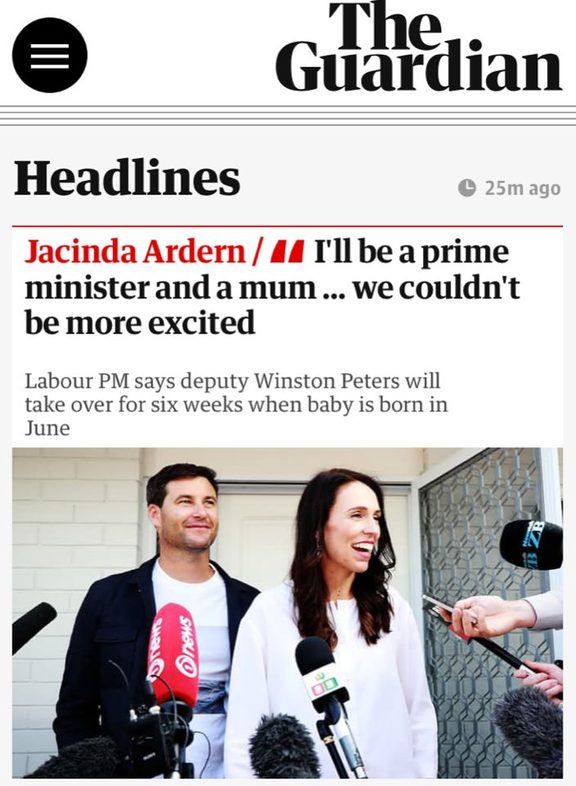 "We couldn't be more excited" - the UK's Guardian sums up the PM's reaction - and that of our media. Photo: screenshot

The headline on that piece was: "Did the PM just win the next election?"

While Brigitte Morten didn't actually raise that question, she did say: "There are numerous opportunities for women's magazine fodder that mops up the votes”.

“For National, this news will make it harder to take on the Prime Minister on substantive issues, or sell its own message,” she added.

Again - worrying stuff, if that’s how it plays out.

But Scoop.co.nz's Gordon Campbell reckoned electoral advantage in 2020 was not a given when the toddler will be two.

"A government seen to be selfish or to be governing for an elite, will also have the prime ministerial baby defined in that light. Yet if Ardern and her colleagues govern for all New Zealanders, the First Baby will symbolise our positive hopes for the future, as all babies ideally do," he wrote.

But on the day the news broke last week, Radio Live’s Mark Sainsbury - a political editor for years at TVNZ - said he was sure there the PM’s pregnancy would boost her political popularity. It created "vibe" of generational change, he said, even comparing it to JFK and 'Camelot' back in the 1960s.

He wasn't the only one saying it was a sign of a new generation at the helm in New Zealand.

But coincidentally, just four days before the baby news broke, Fairfax Media’s political reporter Henry Cooke worked out that the collective age of the new cabinet was exactly 1,000 years.

"Despite widespread proclamations of generational change, the new government's cabinet is - on average - just one year younger than the last one," he wrote.

Whatever the impact on the so-called 'First Baby', it is the media will influences the public perception.