The publishers of the Stuff and NZ Herald websites say they will now do more to distinguish this content from genuine news online. 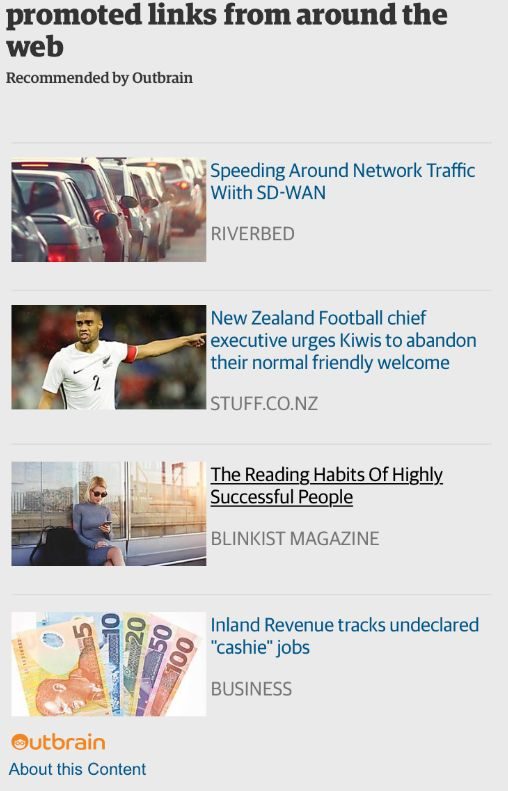 What recommendation engine picks from the web. Photo: screenshot

A complaint was made to the Press Council over links to “recommended” or “promoted stories” on the two news websites.

The stories came from offshore online company Outbrain, which provides links to articles and videos based on a reader’s location and previous online browsing.

Both media companies argued the content was advertising - not news - and it was not under the control of its editorial staff, but the Council concluded the publishers of New Zealand news websites are accountable for promoted links offered to readers.

Tom Frewen - a former editor of RNZ’s Mediawatch and Today in Parliament - initially complained about a “promoted story” that appeared on the Stuff site in October headlined: "A Levin man is the new member of the Bitcoin Millionaires' club".

This linked to a website with a single story about investing in the crypto-currency. There was no Levin man mentioned in it - or in similar stories about "a Paraparaumu kid" and a taxi driver in Christchurch which Mr Frewen found on the Herald’s site.

“Outbrain failed even by its own standards. Its guidelines prohibit "inaccurate, misleading or overly sensational headlines," said the Council in its ruling.

The Council accepted the stories and ads are hosted on other sites and are a mix of journalism and ad copy.

"Those stories are beyond our jurisdiction due to their geography and content," The Council said.

"The headlines however appear in this country, and while some lead to ads and others to stories, member news organisations should be expected to take responsibility for the content they publish, sponsored or otherwise.  . . .to ensure they meet the Council’s principles," the Council ruled.

"That the editors have lost control over content that includes news stories and mimics news to such a degree is of real concern to us, and we hope would also be of concern to the industry," the Council said.

Stuff.co.nz has amended the title 'Promoted Stories' attached to Outbrain content to read 'Paid Content' - and it has added a link to more information about Outbrain.

NZ Herald publisher NZME is also making changes “despite our belief that we were complying with international standards”.

NZME said the Herald website would now label external links provided by Outbrain as “Paid Content” and display  the external website’s name. It will also separate these links from the Herald’s own content on the site.

NZME also said “the commercial realities for publishers today” has not been fully addressed and revenue from what it called "native advertising" was important.

Outbrain has become a significant source of revenue for many news websites around the world since it was founded by two former Israeli naval officers in 2006.

When you scroll down major news websites, you will often find a set of stories tagged 'recommended for you' from Outbrain, or another so-called "recommendation engine".

The websites with the original articles pay Outbrain for the traffic and Outbrain pays the sites on which the links appear.  Both parties make money when readers click on them.

Outbrain claims to serve up 15 billion page views per month around the world on more than 35,000 sites.

Critics have condemned Outbrain for serving up stale, irrelevant and inaccurate articles and advertising in disguise - alongside genuine journalism.

Digital news media expert Frederick Filloux recently described Outbrain and its global rival Taboola as “a horror show” that will prove to be bad for the media in the long term.

“These two are the worst visual polluters of digital news. In most cases, they send the reader to myriads of clickbait sites. This comes with several side-effects: readers go away, and it disfigures the best design,” he wrote.

“Repeatedly direct your reader toward a shallow three-year-old piece -  and it’s highly likely she might never again click on your suggestions." 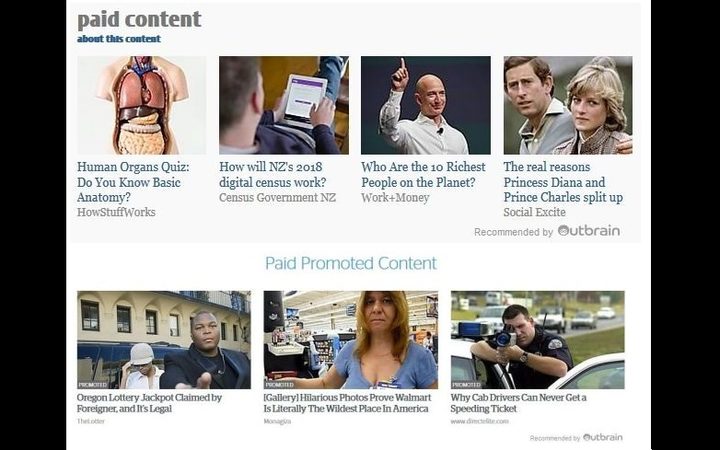