A merger of New Zealand's two biggest news publishers is off the table.

The High Court has dismissed an appeal against the Commerce Commission's rejection of a merger which Fairfax New Zealand and NZME had argued was essential for their long-term survival. Mediawatch looks at a legal long shot that failed.​ 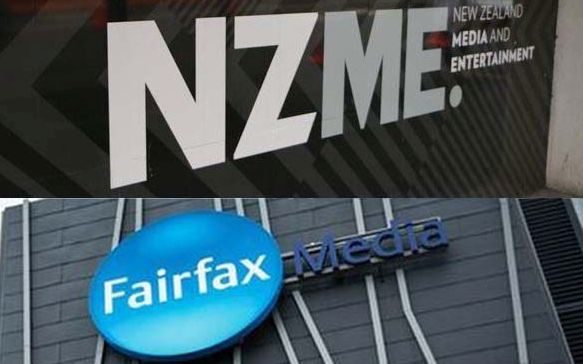 Justice Robert Dobson's decision says the appeal was declined after reaching the same conclusion as the Commerce Commission in respect of the anti-competitive effects on online national news outlets and newspapers for the readers and the advertisers.

The Commission had already concluded one joint company would concentrate ownership of newspapers to an "unprecedented" extent.

However, the High Court did not uphold the Commission’s view that the proposed merger would have lessened competition in the advertising market for Sunday newspapers or make a paywall for their online news more likely.

Between them, the two companies dominate national and local newspapers and also national news online.

Fairfax NZ owns Stuff.co.nz, The Sunday Star Times and most of New Zealand's daily and community newspapers and social site Neighbourly. Its rival NZME owns The New Zealand Herald and its website, regional newspapers in the North Island and half the country’s commercial radio stations.

A merger would have allowed both to cut their costs and cut out things they double up on, such as covering the same routine news stories every day. At a stroke both companies would also lose their main online news competitor: each other.

Fairfax and NZME stressed that their financial positions and the growing power of offshore online giants like Facebook and Google made the merger urgent. The Commerce Commission considered all these arguments in its draft determination last November, in subsequent submissions from Fairfax and NZME and at a special conference including both parties last December.

The appeal was effectively asking the High Court to overturn the Commission's most significant conclusions and its interpretation of the Commerce Act.

While the Commission concluded Fairfax Media - recently rebranded as Stuff - and NZME could save money and extend the life of some publications, it also said other major media outlets would not be able to compensate for the reduction in "plurality."

They said the Commission failed to give sufficient weight to "the number, variety and nature" of small and large outlets providing news to New Zealanders - including the National Business Review, Otago Daily Times, and Bauer Media, which owns the bulk of New Zealand's magazines.

"On all the evidence before the Commission, we consider that it is appropriate to attribute material importance to maintaining media plurality. It can claim status as a fundamental value in a modern democratic society. We cannot be certain that a material loss of plurality will occur because of the factors we review that would hopefully assist in maintaining it. However the risk is clearly a meaningful one and, if it occurred, it would have major ramifications for the quality of New Zealand democracy. In our analysis on the clearance application appeal we have recognised material barriers to entry in the market for production of New Zealand news. We agree with the Commission that a substantial loss of media plurality would be virtually irreplaceable."

Fairfax and NZME had also claimed the Commerce Commission investigation and procedure "breached of natural justice" because it considered anonymous submissions and granted confidentiality to third parties.

The Court has dismissed those criticisms and indicated the Commission is entitled to costs.

"The two companies sought the merger because it was our belief that it was in best interests of the NZ media industry.  A combined business would have created efficiencies and benefits that would have made it easier to continue to deliver high quality independent journalism at scale for the benefit of Kiwis around the country."

NZME chief executive Michael Boggs said earlier this year it was "business as usual for NZME" while he awaited the ruling on his appeal.

Both companies say they will review the full text of Justice Dobson's ruling when it is published. They have the option of going to the court of Appeal.

But for now, both companies must pursue Plan B with a merger off the table.