New research concluding the lack of women in top jobs costs the whole country dearly got a lot of coverage this week - even in blank spaces in the Herald. 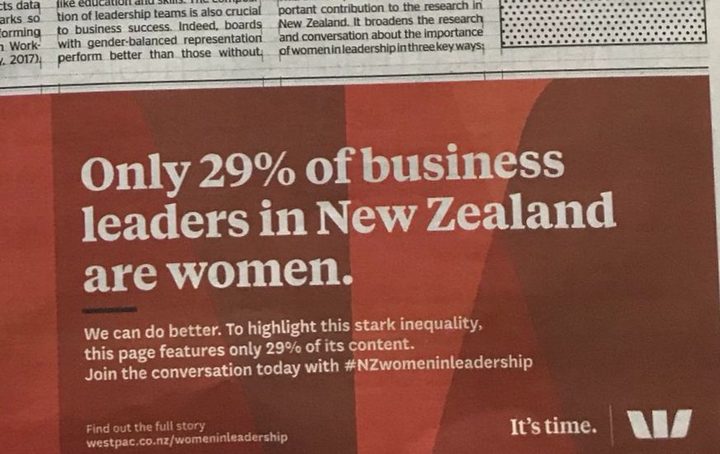 Last Tuesday, a page of The New Zealand Herald was a bit of a mess. Blank spaces, missing pictures - it looked a bit like it had been sent to the presses before it was ready.

These things do happen.

But this was all part of the cunning plan cooked up by ad agency FCB and the Herald to illustrate to the findings of a new survey of 500 business commissioned by Westpac.

Next to the headline which said that only 29 per cent of NZ’s business leaders are women, the Herald said:

We can do better. To highlight this stark inequality, the front page and business section of this special edition carries only 29% of its content.

Clever - though logically a paper missing 21 per cent of its content would be a more accurate depiction of the lack of equality.

Some selected people got that special edition in a special bag of breakfast treats along with a letter from Westpac’s chief executive urging them to share images of the Herald on social media. 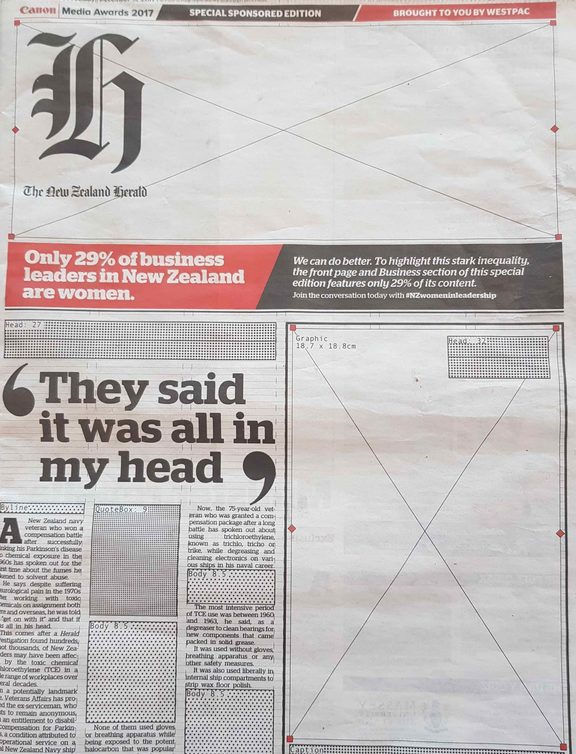 It would have been bad PR if their own survey had them coming up short, but there was never any danger of that judging by this footnote in Westpac’s press release.

A separate long-standing internal measure puts Westpac NZ slightly higher at 52 per cent. However this is based on a wider definition which includes some lower level managers with direct reports, as well as some influential senior roles that don’t directly manage staff.

Westpac must have been really keen to say it crossed the 50% barrier for gender equality at the top. But maybe it was wise to hold back.

In October, Westpac across the Tasman also hired Deloittes to do a similar survey and claimed its own internal measures showed it already had women in half of its 6000 leadership roles.

This was “a signpost that our nation is . . . unlocking the potential of women”, CEO Brian Hartzer claimed.

But the Australian Financial Review reviewed the data and accused Westpac Australia of fudging the figures by classifying some jobs as executive roles which hadn’t been classed as such earlier.

Two employment experts looking into the claims of “gender gerrymandering” also concluded Westpac Australia hadn’t yet conquered inequality. The bank’s concerted efforts were at “best-practice levels” for Australia, they said but the bank’s PR-driven "posturing" actually obscured work yet to be done.

“We have surmised that the publicity surrounding corporate ethical initiatives often reduces them to being little more than the pursuit of an aura of corporate greatness – itself belonging to a long standing masculine tradition of competitive self-aggrandisement," they wrote.

Too harsh? Maybe. But at least the heavily-promoted survey was scrutinised across the ditch. 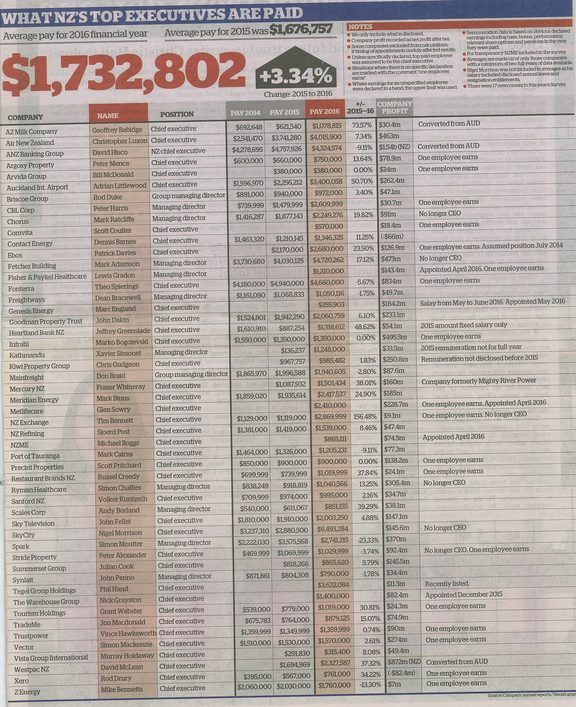 The only woman's name on this page of The Herald listing top CEO's pay is that of the journalist who compiled it - Aimee Shaw. Photo: PHOTO / RNZ Mediawatch

Between them Westpac NZ, The Herald and the ad agency successfully highlighted inequality of opportunity at the top for women in New Zealand's businesses - and, along with other media, aired newsworthy conclusions from the Westpac Diversity Dividend Report.

But readers wondering how they worked out more women at the top would boost productivity and add nearly $900 million dollars to the nation’s economy were still wondering after reading all the articles and editorials about it this week.

None of the online ones even linked to the report which did set out how it was done.

Back in August The Herald highlighted the lack of women at the top pretty powerfully on its own in its annual rankings of chief executive’s pay for all the companies on the NZX50.

All of them were listed on a table in the Herald's business section -- and there’s only one woman’s name anywhere on the page.

That was Aimee Shaw - the Herald business journalist who wrote the article.