Not so far out

An enthusiastic Italian got in touch with Mediawatch on Twitter this week with stunning pictures of New Zealand seen from space. But he wasn’t as far out as many media outlets seemed to think. 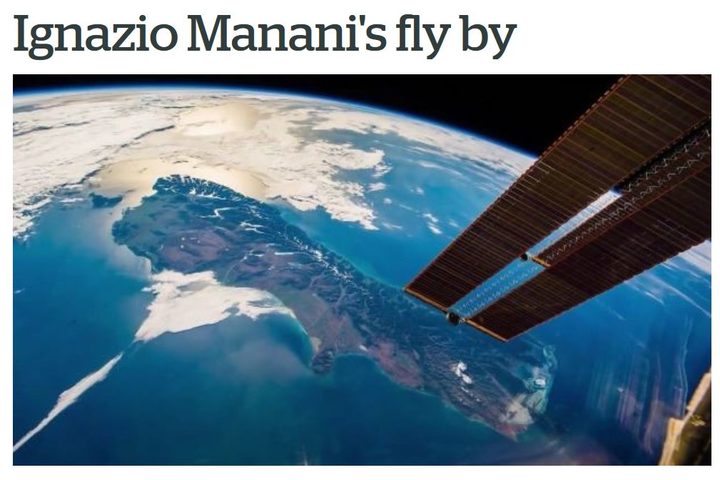 A Herald story which got it wrong about Ignazio Magnani - and spelled his name wrong too. Photo: screenshot

On Wednesday, Mediawatch got a tweet from an Ignazio Magnani from Italy, attached to a very nice photo of the Wellington and Wairarapa taken from a long way up. And he’d copied in RNZ, Te Papa and several other journalists too.

Wow that's us! Thanks for the share Ignazio! Would you mind if we share this on our page? We will give credit to you of course :)

But the name 'Ignazio Magnani' rang a bell.

Back in March, the Media Watch TV show on Australia’s ABC took a look at Australian media reporting of the pictures Mr Magnani shared on Twitter.

A string of Australian and overseas media outlets had reported Ignazio Magnani was an astronaut who'd taken the pictures from the International Space Station - including the New Zealand Herald - twice.

"As Kiwis wound down from another summer's day, astronaut Ignazio Magnani was pointing his camera down from 400 kilometres above the Earth," the Herald reported in January.

Media Watch went on to say Ignazio Magnani never actually claimed that he’s an astronaut or that he’d ever set foot on the international space station - let alone taken photos from it, but media organisations he tweeted jumped to that conclusion and never bothered to check.

All this had actually been spotted at the time by a journalist here too - one working for an online news site also based in Australia.

“This wasn't New Zealand last night, and it wasn't shared by an astronaut ,“ wrote Colin Parker, then an Auckland based writer for Yahoo 7.com.au.

He pointed out that the pictures were actually months old, and got this comment from a spokesperson at NASA:

“We do not  - and have not  - had an astronaut called Ignazio Magnani. It appears he’s just an enthusiast who retweets and shares NASA content."

That would make him a very humble astronaut.

The Herald story the ABC show quoted earlier has since been altered. The description of Mr Magnani has changed from from “Nasa astronaut” to the less intrepid “Twitter space enthusiast.”

Perhaps the Herald was too enthusiastic filling space online with his gifts from Twitter.