These days Playboy is just one of many pornographic products on the shelf and a lucrative logo slapped on other stuff. Its founder has long been a ludicrous figure in a dressing gown and the ship’s captain's cap. But when Hugh Hefner died on Thursday afternoon, the media thought nothing else was as important. 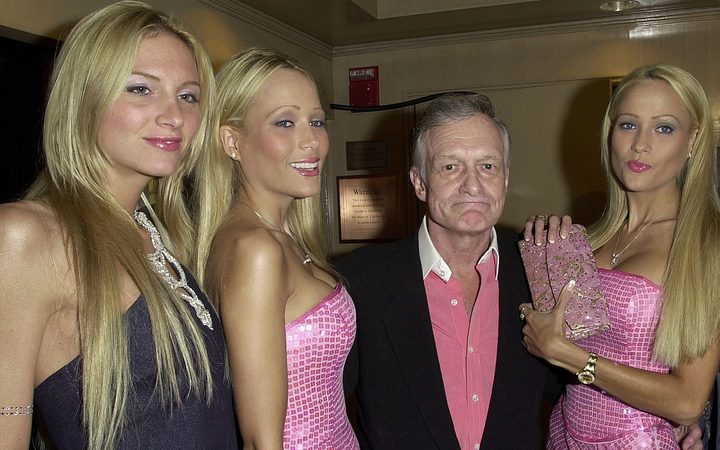 Some foreign media moguls are of course significant figures in our public life. But with the possible exception of the octogenarian Rupert Murdoch it's hard to imagine any of them leading the news here when they die.

It's a long, long time ago Playboy broke new ground in publishing - these days it's just one of many pornographic products on the top shelf and a lucrative logo that's slapped on any number of other licenced products to make more money.

And its founder has long been a ludicrous figure in a dressing gown and the hat of ship's captain.

But when Hugh Hefner died on Thursday afternoon, the news media here thought nothing else was as important.

TVNZ One News lead with it at 6pm - tacking a local angle on at the end citing the fact New Zealand actor Matt Whelan recently played Hefner in the documentary series American Playboy, the Hugh Hefner Story.

While TV3 introduced the item by saying "the man who pioneered a sexual revolution in our time has died."

Whether he pioneered the sexual revolution or pimped it for profit has been fiercely debated in the media since he died.

Tellingly it was TV3's entertainment reporter who summed up his life and death for Newshub at 6 - starting like this:

"Defying the laws of physics and good taste, but testament to the marvels of modern medicine and chemistry, Hugh Hefner lived to the grand old age of 91."

Reportedly he wasn't defying physics so much as conquering it with chemicals - though TV3's obit didn't overlook the gruesome and sexist side of his modus operandi, reporting that waitresses had to have internal examinations for venereal disease and they were told this was a requirement of the state.

Newstalk ZB broke the news at 4:30pm, before Larry Williams spoke to entertainment reporter Dominic Corry in Los Angeles - who shoehorned in an old cliché saying "I only read it for the articles so I wouldn't know anything about that".

In its day the magazine featured challenging journalism by top writers. Obituaries in the likes of the New York Times and Washington Post gave him credit for that and for a commitment to sexual freedom, although mostly the kind men would benefit from.

Host Ali Jones broke the news of Hugh Hefner's death on RNZ's The Panel but then regretted asking panellist Jo McCarroll for an opinion after she said "I think he was just a sad old predator".

There was no fear of speaking ill of the dead from journalist Rose Hoare in an opinion piece published on Thursday night on stuff.co.nz.

In this, she said there were "plenty of bros high fiving on social media in tribute to the man who created Playboy publishing empire - with a loan from his mother".

But she went on to say that: "To women, he was gross and lame, a relic of the kind of slobbery sexism that rightfully belongs in the grave."

And that his Girls of the Playboy Mansion reality TV show series, was so dated it felt like feminism's answer to a black and white minstrel show.

On Friday's Morning Report writer Jacqueline Friedman said women in his mansion lived like hostages. When asked what she thought Hugh Hefner's epitaph should be, she laughed saying she didn't know about his epitaph but that she hoped his afterlife involved being surrounded by women who weren't concerned about his pleasure.

Hugh Hefner himself acknowledged he got rich because sex was important to people.

Evidently it's still so important to the media here that they rated the newsworthiness of his death so highly, long after he was really important to anything.