Fear and loathing in the farming press

Claims that the election pitted town against country were strongly echoed in the media - especially the farming press. 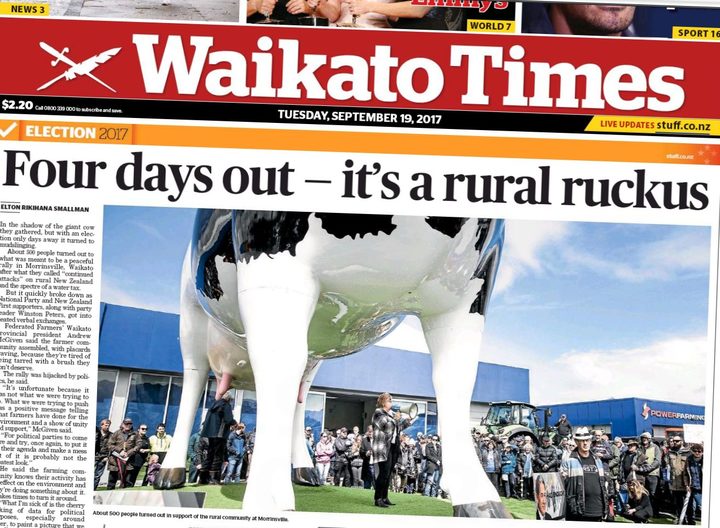 Hundreds of farmers to beat a path to Jacinda Ardern's home town of Morrinsville last Monday. 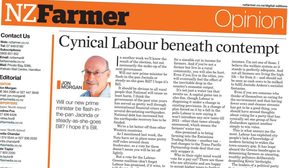 They feared a change of government would hit their bottom line and that they were being blamed too much for the state of the environment. Their strength of feeling prompted many pundits and reporters to say the gulf between town and country was widening.

"There has been a town and country divide in New Zealand for a long time. It has now become a real chasm," said Newshub's political editor Patrick Gower in Morrinsville.

That divide was certainly mirrored in the media.

In a stuff.co.nz column, political commentator Chris Trotter said the organisers “were simply adding another chapter to the already lengthy story of rural antagonism towards the needs and aspirations of New Zealand's urban majority."

"The latter looked on, appalled, at the selfishness and ignorance which unfailingly follow the country into town,” he wrote.

In NZ Farmer, editor Jon Morgan blamed Labour for widening the town-country gap under the headline: Cynical labour beneath contempt.

”Farmers should not be seen as cash cows to be milked for Jacinda Ardern’s socialist fantasies," he wrote.

A fantasy of another kind formed the guts of an extraordinary letter published below that editorial.

It was pretty clear who Pete Fitzherbert - a young farmer of the year finalist from 2016 - had in mind when he urged readers to "think of the government like a girlfriend."

"All in all it was a rather damp squib and reeked of the political rather than the social . It certainly didn't seem to highlight the positive things about farming," he wrote after a special edition of the show which streamed the protest live.

In Farmers Weekly his co-host on The Country - longtime rural radio presenter Jamie McKay - wrote about his nightmare vision of ten years from now - under the heading Once upon a time, when farming was legal.

"I might have grandchildren come to me and ask, "Hey Grandad are you old enough to remember when we had cows living outside and grazing on grassy green pastures? And is it true that sheep once used to roam freely in our high country before we fenced off all the little natural waterways and the native grasslands reverted to wilding pines, gorse and broom? Grandad, was farming really a 'thing' back in 2017 before it was outlawed?"

Jamie McKay seemed to have his tongue in his cheek there, but others writing in Farmers Weekly were serious about farming being under threat.

Ashburton retail spokesperson Bob McDonald told Farmers Weekly “a change of government and their proposed tax policies would be the breaking of rural towns and their wider economies."

"Every tax dollar dragged out of rural economies will be deposited straight back up to Wellington and Auckland and it will kill us. It’s beyond belief," he told the paper, under the headline Climate of fear in rural towns. 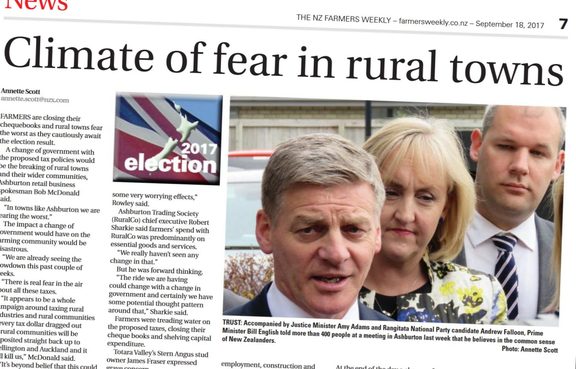 “It is critical that the National Party wins the election or the rural sector will be thrown into turmoil," the owner of Totara Valley Stern Angus Stud told Farmers Weekly. He went on to say a tax on water would halt plans for employment, construction and environmental work on his farm.

Over the page, Farmers Weekly sampled the thoughts of four farmers on the rural-urban divide.

“The real issue is the finger pointing and the lack of acknowledgement of the environmental work farmers have been doing for a long time,” Canterbury dairy farmer John Donkers told the paper.

“We expect to be questioned but don’t throw the baby out with the bathwater,” said south Canterbury sheep and beef farmer Nicky Hyslop.

Farmers Weekly didn't mention she was the current chair of Irrigation New Zealand and he was a former chair who's still on its board.

However, the 'Alternative View' column at the back of Farmers Weekly lived up to his name.

“Claims that we have read in Farmers Weekly about driving a wedge between the rural and urban populations are rubbish. It is vocal politically inspired farmers who are doing that,” wrote retired Wairarapa farmer and consultant Alan Emerson.

He said “hyperbolic farmers” had overlooked reports that the current government had officials currently working on proposals to put a price on water.

The Ministry for Environment's Technical Advisory Group had terms of reference tasking them to consider “pricing mechanisms to improve efficiency,” he said.

“These are divisive times and this campaign hasn't done much to bring New Zealanders together. It's worth remembering that when the dust settles, we all want to get to the same place,” Farmers Weekly editor Bryan Gibson wrote in an even-handed editorial.

But in the current climate, they would probably pick a fight about who should pay for the water to settle the dust in the first place.