Campaigns can be hazardous to your health

An election campaign full of hazards for candidates ended amid a punctured pipe, a bubble bursting, the threat of a youthquake and a chasm between town and country. Mediawatch boils down the media's election campaign in 15 minutes.

Was The Block's botched finale a sign of things to come? Photo: screenshot / Three

Precisely one year before election day, John Key told TV3’s The Nation he intended to lead for a full fourth term.

But six weeks later he quit in December, startling almost everyone in the media and in politics.

The political year began with the prospect of Bill English and deputy Paula Bennett lined up against against low-polling Labour pair of Andrew Little and Annette King for this election. RNZ political editor Jane Patterson put it politely when she said it wasn’t exactly shaping up as epic contest of personality politics.

But it didn't work out that way.

Three other leaders also perished before a single vote was cast. Labour levered Jacinda Ardern into the deputy’s job and then Andrew Little quit in late July ushering in full-blown personality-powered, opinion poll-pummeling power of Jacindamania.

When the first polls showed big swings to Labour, the so-called Jacinda effect was in full effect in the media - especially when she front-footed former cricketer Mark Richardson on maternity leave and wiped off Gareth Morgan's lipstick smear.

(When Peter Dunne pulled the plug on his campaign, no-one called United Future's fresh new face "lipstick on a pig" though it was his Hollywood looks that captured the media’s attention and not his party’s policies).

The second leader to perish after the billboards and pamphlets had been printed was Green co-leader Metiria Turei, who quit on RNZ's Checkpoint after not telling the full story about how and why she bumped up her benefit back in the day as a solo mum.

John Campbell said she had told a powerful story of life a benefit - but it was not entirely her story. Newshub's Patrick Gower claimed his team's poll had claimed her scalp, then apologised for that to surviving Greens co-leader James Shaw.

James Shaw seemed fine with it while others called the media out for double standards, claiming Bill English had survived having to paying back the public for housing allowances he didn’t deserve in the more recent past. 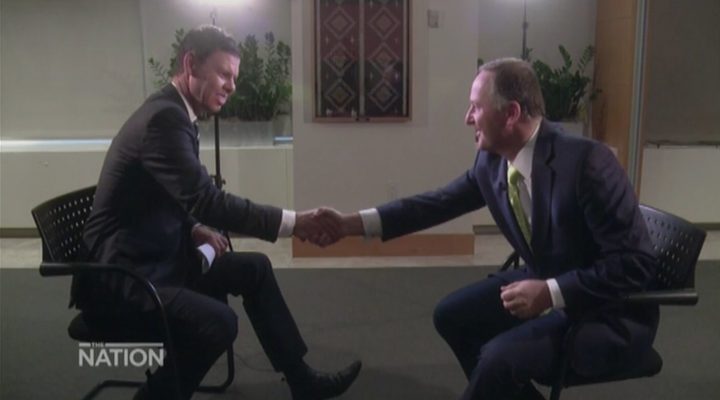 He started it . . . One year ago, John Key told TV3 he would serve a fourth term as PM - but changed his mind. Photo: screenshot / The Nation

There were calls for Winston Peters to front up and or even step down when Newsroom.co.nz revealed someone had super-sized his superannuation. But Winston Peters emerged from the saga more sinned against than sinning in the public mind, even though he's turned leaking information to the media into an art form in the past.

As well as good scoops, the media were also on the look out for dirty politics, fake news and misinformation.

Stephen Joyce ended up in a hole for the latter after claiming there was a 12-billion dollar deep hole in Labour’s alternative budget no economist could locate. Newshub’s Patrick Gower fact-checked the National Party bluntly on income tax and pinned the "biggest lie of the campaign" on them.

In the end, Labour put off decisions about tax changes until after the election but the yet-to-be-set levy on the commercial use of water had opponents up in arms and farmers on the streets of Morrinsville.

National’s Paula Bennett warned Labour that if you don’t release the details others will do it for you. National and New Zealand First piled in to the media with wild claims of  $18 cabbages and $75 added to every bottle of wine if irrigation became a source of revenue.

Meanwhile, liquid leaking onto farmland became an issue when that fuel pipeline to Auckland airport was pierced, kickstarting debate about our nation's infrastructure.

"Why is our biggest city at the mercy of a dickhead with a digger?" Mike Hosking asked Bill English on Newstalk ZB.

Housing was a hot topic throughout the campaign and one week out from decision day, critics claimed the meagre returns on million-dollar homes for the contestants on TV3's The Block was proof positive the Auckland housing bubble had burst - with all the political fallout that would entail.

Others said the election itself was to blame for creating uncertainty in the minds of buyers but either way, The Block’s botched finale seemed to point to what may come this weekend: after months of back-breaking work under the media spotlight, the wannabe competition winners would be twitching on live TV during the grand finale, not knowing who had won or lost even when the results were in.