At election time, political parties push policies on big ticket issues like tax, health and education to woo voters. Announcements on broadcasting or the media are often left to the last minute or overlooked entirely. Mediawatch rounds up what the various parties are offering this time round - if the issue is on their radar at all.

“Who needs public radio when you have the choice of 100 stations?” broadcasting minister Maurice Williamson asked in 1993.

In 1995, the national-led government decided to get the state out of the commercial radio business.That’s why we have RNZ National and RNZ Concert today, competing for listeners with privately-owned Newstalk ZB, the ZM network and others.

In his valedictory speech last month, Maurice Williamson said failing to sell off TVNZ in the early 1990s was the "biggest regret" of his entire political career.

“I seriously, seriously do not know why the government owns a commercial television station," he said, noting that many of TVNZ's programmes today are from the UK.

"How the hell is that promoting New Zealand culture, for goodness’ sake," he roared.

Mr Williamson was broadcasting minister between 1990 and 1996, when the deregulation of broadcasting unfolded and privately-owned TV3 arrived on screen. In his farewell speech, he complained that channel wasn’t delivering for New Zealanders these days either.

“When TV3 drops Campbell Live but brings on some Scout programme about Rachel Glucina and the gossip columnists and I feel I lost the plot here. Something has gone wrong," he told Parliament.

But having failed to get the government out of commercial TV, Maurice Williamson said he was proud of getting it deeper into Māori broadcasting.

"You will know it as Te Māngai Pāho, but I called it Te Reo Whakapuaki Irirangi. We set up 23 Māori radio stations," he said, adding that he even appointed political opponent Hone Harawira - formerly a manager and broadcaster at Kaitaia-based Te Hiku Media - to the board.

It's another reminder that the broadcasting we have today was shaped by political decisions made years ago. 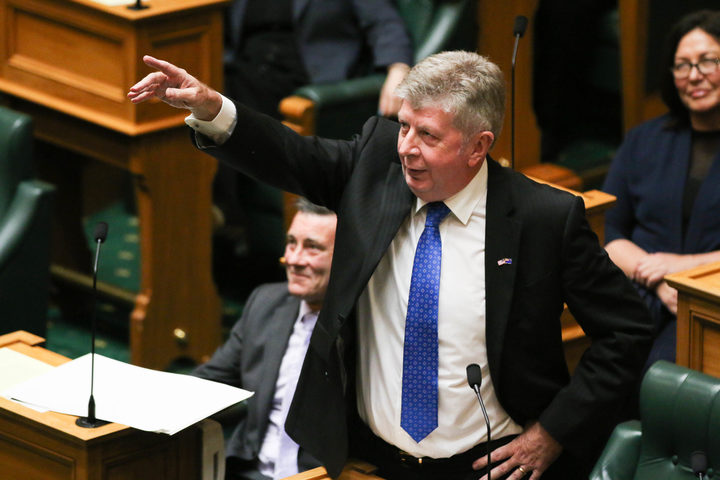 National's Maurice Williamson points to his wife in the gallery during his valedictory statement to the House. Photo: VNP / Daniela Maoate-Cox

With another election upon us now, what visions of future are the parties proposing for our media? Broadcasting is not seen as a real vote-grabber in the same way as tax, health or education. Or even freedom camping. Sometimes the parties only get something out in a hurry with a few days to go, or not at all.

But some of the minor parties have had firm ideas of what they want out in public for quite a while.

MP Clayton Mitchell put forward a bill to put “sports of national significance” back on free-to-air television this year. Party leader Winston Peters put the the idea on the agenda in June 2016 when he claimed the All Blacks could only be seen live by "the more cashed-up members of our society".

The bill was not backed by Parliament but the idea is still in the NZ First broadcasting and ICT policy along with the creation of a new crown entity named the "Public Media Commission of New Zealand" to oversee a merger of state-owned TVNZ1 and RNZ.

TVNZ2 would remain a commercially operated state-owned enterprise to subsidise, in part, the ad-free TVNZ1.

NZ First also backs boosting the Telecommunications Development Levy “from $1 per month per consumer to a suggested $2 per month ... to subside non-commercial New Zealand content.” The party wants to make commercial broadcasters and international media providers such as Netflix pay that levy too.

It would also amend the Radio New Zealand Act "to ensure unbiased and fully representative reporting on political parties, their policies, and views on items of national and international importance to reflect the MMP environment of New Zealand’s political system."

The Green Party’s policy is based on backing and bolstering existing state-owned broadcasters and broadcasting funding agency New Zealand on Air.

It wants to set up a "a Digital Media Commons" in partnership with public television, public radio, community broadcasters and online outlets. It also supports a separate funding stream for New Zealand-made documentary, children's programmes and drama - and also community access broadcasters.

Last April, the Greens announced they would boost RNZ's budget by restoring its funding to the level of 2008 when it was frozen by the current government and create a public journalism fund of more than $3 million a year to be administered by Creative New Zealand to bankroll “public interest journalism” projects on any media.

The leader of the newly-launched TOP hit headlines in February, with a bold call to sell state-owned TVNZ as part of its wider plan to reboot public services.

TOP would sell TVNZ and “use the proceeds to set up a Public Journalism Fund as part of NZ on Air.

"RNZ will be able to compete for this funding alongside other platforms," the policy says.

TOP’s tax reform policy also says the likes of Facebook and Google - which profit from news but don’t create any - will "pay their fair share of tax".

Labour said it would be like public broadcasters BBC in the UK or ABC in Australia, but it would not be funded in the same way. Labour would establish a five-member Public Media Funding Commission to oversee the funding for RNZ+ and NZOA, and to recommend the level of funding both should have in the future.

TVNZ would remain in public ownership. It would be "encouraged to continue to develop commercially and competitively" and support the new RNZ+ if the new Public Media Funding Commission asked it to.

The new RNZ+ would also be required to “develop a Pasifika television channel or audio-visual content service”.

This echoed a policy promise of a free-to-air Pacific Island television made by Labour late on in the campaign of 2008. Labour lost that election and the idea had not been seen since, including in the 2014.

The Māori Party has been a strong backer of Māori TV, which secured an extra $10.6 million in funding in the 2016 budget. In 2014, iwi radio got $12 million over four years from the budget.

The ACT Party has nothing about the media in its published policies.  That’s not surprising given that its overarching aim is smaller government and less spending on non-core services. Ahead of the last Budget in May, leader David Seymour said spending public money on local TV entertainment shows was a form of corporate welfare which should be scrapped.

Even though the Mana movement's leader Hone Harawira managed Kaitaia-based Te Hiku Media in the past, the party has no media policy listed on its website.

But as Internet Mana in 2014, it supported a commercial-free public TV channel for New Zealand, more funding for radio, new charters for public broadcasters and levies on commercial broadcasters and telecommunications companies to pay for it.

Outgoing longtime leader Peter Dunne has been vocal about the media in the past, but the party has no specific media or broadcasting policy available at the moment.

In 2014, it backed a review of public service broadcasting "including consideration of sustainable funding for Radio NZ, whether TVNZ should be sold and its public functions transferred to a new public television service, and/or potentially merged with RNZ".

United Future also proposed increasing RNZ's funding at the rate of inflation until the findings of this review are implemented.

National has yet to announce any specific policy on broadcasting or media. It is far more focused on technology and the national roll-out of broadband in its communications policy.

Leader Bill English disestablished the job of Minister of Broadcasting when he became prime minister, absorbing the role into the Arts, Culture, and Heritage portfolio.

The previous broadcasting ministers Amy Adams and Craig Foss oversaw reviews on the impact of digital technology on broadcasting, but both preferred not to intervene to regulate the media in any significant way.

The business of public broadcasting has been largely left to the oversight of New Zealand on Air, whose budget - along with that of RNZ - was frozen at the 2008 level until last May’s Budget.

Ironically, one of National’s few decisive interventions was an amendment to The Broadcsting Act for “election programmes and election advertising”, which was also supported by Labour and other parties.

Effectively, that bumped up the public money available to be spent on political advertising and freed up the parties to spend it on ads across all media and online during the current election campaign.