Three live Ardern v English debates in seven days pumped up coverage of the election campaign. The media picked out the leaders’ zingers, bangers and clangers - and agonised over who won and who lost. But who cares, so long as voters learn something useful?

There's been no shortage of people hailing this campaign for throwing up unexpected drama - with the prospect of more to come - but for Barry Soper, it seems ‘drama’ is not the same thing.

“The current aspirants don't put in the same election campaign hard slog that former contenders did. Long gone are the daily Town Hall meetings around regional New Zealand, along with the theatre that accompanied them," he wrote.

Barry Soper seemed to be pining there for the days when Rob Muldoon could pull a mob to the Wiri woolstores. These days Jacinda Ardern and Bill English traipse around schools, workplaces and shopping malls instead, posing for peoples' selfies. Political reporters following the leaders lately have sent out steady streams of such pictures on their social media feeds.

But Barry Soper's main point was this:

“These are essentially the fill-in events while they prepare and perform for their spin doctors away from the cameras for the main event - - - the television debate."

Just as Wiri woolstores of yesterday have been replaced by Westfield malls today, the TV studio is now the town hall.

The first live head-to-head debate on TVNZ was teed up by a poll putting Labour in the lead, but it disappointed former TV3 news boss Mark Jennings who oversaw dozens of debates in his time at the channel.

“As a contest of ideas and issues, it was fine. As a piece of television, it was dire. It lacked any sense of theatre or drama. The audience, small, mute and mainly sitting in the dark, might as well not have been there,” he wrote on the news website he now co-edits, Newsroom.co.nz.

"I think TVNZ was caught out. If you go back two or three months when these things are planned we had a boring election on our hands. They probably thought there was no point in sinking money and effort into it," he told Mediawatch.

Patrick Gower - political editor at TV3 under Mark Jennings in the past - was the host of the next debate on Three last Monday night. He seems to relish the exposure and the chance to play a role as much as the prospective PMs.

Like TVNZ's debate, this one was also teed up with a story no-one saw coming earlier in the day. But Decision 2017 skated over Steven Joyce’s claims of a fiscal hole nearly $12 billion dollars-deep, even though it was almost certainly designed and timed to disrupt the debate in National’s favour.

But viewers did learn some new things from the Newshub debate. Bill English set a child poverty target and Jacinda Ardern said she would retaliate against further Australian crackdowns on Kiws’ rights over there.

Turning back the clock, town hall-style 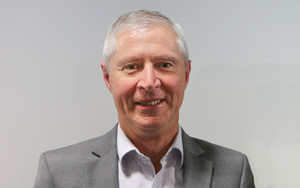 That night, stuff.co.nz published a piece questioning the impact of set-piece leaders' debates.

"The leaders of the major parties get to fire off a few zingers at each other. But the debates don't seem to have much impact on voting," said stuff.co.nz.

But the article reckoned one exchange in its own debate bucked the trend - PM John Key telling Labour's leader Phil Goff to "show me the money" in 2011.

It quoted the editor-in-chief of The Press, Joanna Norris, as saying it was a turning point in the whole campaign.

As it happened, she was the host of the next leaders debate run by Stuff.co.nz on Thursday, billed as a "town hall- style" affair also available online to anyone with broadband around the country.

This provided some of the old-school 'theatre' Barry Soper fondly remembered from campaigns past.

Once underway, the Stuff website hammed it up with this heading: 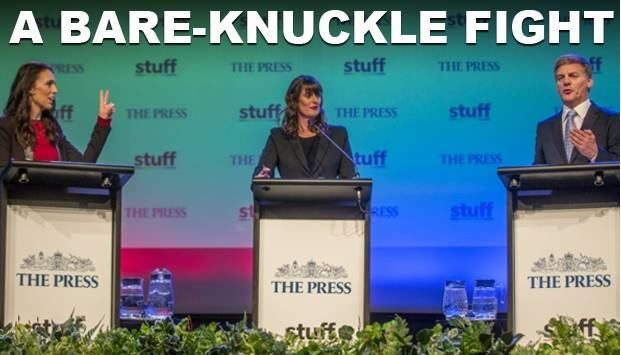 Stuff.co.nz over-eggs the aggro in its Christchurch debate. Photo: screenshot

It got heated, yes, but scarcely any more so than Question Time in the House on good day (or a bad one depending on your appetite for angry MPs).

Unlike the TV efforts, this one had time on its side. It went on for almost two hours with no jarring ad breaks - only one big water break for the hardworking contenders.

Major election issues were thrashed out in more detail and with more to-and-fro than the TV debates delivered.

Mark Jennings oversaw many live leaders’ debates over many years as head of news at TV3.

"I think all the debates have been useful. They've given us a good insight into the two leaders and their parties and the clear differences emerging," he told Mediawatch.

"The TVNZ one was basically two interviews conducted in the same place. The Stuff.co.nz was one loosely controlled by print journalists. Tracy Watkins was looking down at her notes while the leaders argued. They were playing to the crowd," he said.

"I preferred the TV3 debate because it had debate but was controlled enough to move things along," he said.

It certainly did move along.

Topics were raised and abandoned at breakneck speed in the Decision 2017 debate, especially in a gameshow-style "quickfire round" shoehorned in at the end.

In other countries, including Germany and the US, candidates' election debates are co-operative affairs rather than rating-driven rival events. They are planned and staffed by journalists from a range of outlets and even different media.

Will we ever see that here?

"It would be great if all the best talent (was pooled). You could turn out something really special. We have a small media but a highly competitive media. We're not really mature enough to talk to each other and work together on these sorts of events," Mark Jennings told Mediawatch.

Who won and lost these debates seemed to matter more to the media than the viewers. The media also almost universally over-egged the aggro on offer as well. Why?

"It's the biggest game in town. This is the most interesting election in a long time and the media are genuinely excited," said Mark Jennings.

Having apparently rediscovered an appetite for politics in primetime during this campaign after the ascent of Ardern, it remains to be seen if TV networks will be as interested after "the biggest game in town" comes to an end, and the questions of who won and who lost have bee answered on September 23.