Will Silicon Valley save the media?

The profits of Apple, Google and Facebook soar while the bottom lines of news media companies slump. Trust in news has been dented by a surge in 'fake news' online. Silicon Valley is clearly part of the news media’s problem, but will it also be part of the solution? Mediawatch talks to the leader of Google's effort to help the media in this part of the world.

"The business model for broad-based, unbiased journalism got kicked in the gonads".

That's how technology writer Kevin Maney bluntly summed up the impact of the online boom and the rise of social media in Newsweek recently.

But Maney argues the titans of tech who brought the pain should now soften the blow, and even Make the Media Great Again.

“Facebook’s Mark Zuckerberg may have his hands on the most powerful levers for journalism in history,” he wrote. “Same for Sergey Brin and Larry Page at Google.”

“The smartest, most powerful people in technology owe their enormous success to a stable, thriving America. Reinventing journalism is a way they can pay back that debt,” Maney argued.

He said Amazon boss Jeff Bezos showed the way when he bought The Washington Post in 2013 for US$250 million - and it's paid off.

"To Bezos, it’s a week’s worth of interest in his passbook savings account."

"But money is only part of it. Bezos brought in a crack team of engineers, revamped the Post’s app and website. The Post is setting records for subscriptions and is hiring 60 reporters."

With help, media companies might get over the current digital hump and become sustainable businesses. 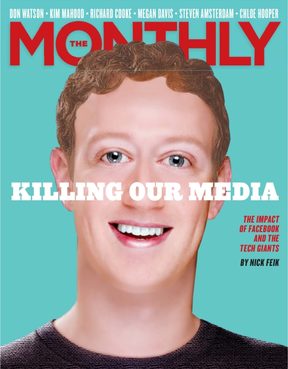 The impact of of social media giant Facebook is a hot topic for the news media in Australia right now. Photo: screenshot

Here in New Zealand, billionaire backers are thin on the ground, and Google and Facebook also pick up the lion’s share of the income from the advertising that’s been the lifeblood of commercial media companies in the past.

"Facebook is a phenomenal beast and it is absolutely, 100 percent our main competitor and constraint," the New Zealand Herald's editor Shayne Currie told a Commerce Commission conference last year.

Fairfax Media’s managing director at the time Simon Tong said Google and Facebook would starve news media of more money in the future.

In Australia, a senate inquiry into the future of journalism has also targeted Google and Facebook's growing dominance.

“Should we be taxing the likes of Google and redirecting that money to support journalism?" asked Sam Dastyari, the senator running that inquiry.

Google and Facebook have always insisted they are just technology companies - not publishers or broadcasters - and they say they want to help media companies where they can.

To this end, the Facebook Journalism Project was launched this year promising new tools for the media, training, and partnerships and fellowships for journalists and editors.

Google had already moved on that too, creating the Google News Lab in 2015 "to help build the future of media".

These days however, its focus on 'verification' is the hottest topic. The US election showed just how fast so-called fake news spreads on social media.

New research by InternetNZ shows almost two thirds of New Zealanders are concerned about “fake news” online. They're not the only ones.

Facing up to fake news in Asia 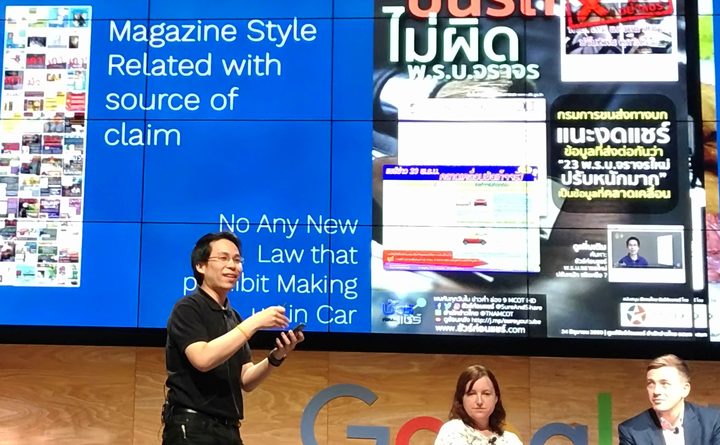 The scourge of online misinformation was top of the list at a recent Google News Lab summit on journalism in Singapore, attended by 150 journalists - including Mediawatch - from all over the Asia Pacific.

We heard how efforts to strike down fake news and hoaxes are run across Asia by individual 'hoaxbusters' - and by big teams at major media outlets.

Japan's public broadcaster NHK has taken it to a higher level with a "social listening team" monitoring social media 24/7 for false information. This was a response to the spread of potentially disastrous misinformation after tsunami and earthquakes after the nuclear emergency in Fukushima. 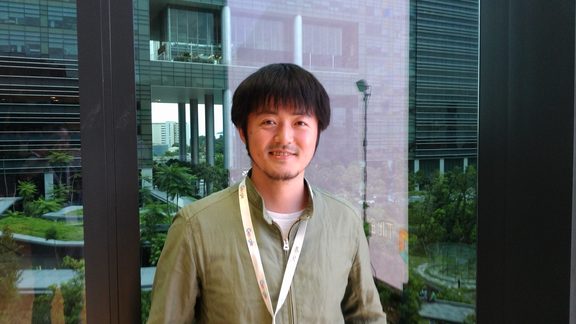 "Sure we have fake news and hoaxes in Japan," Daisuke Furuta told Mediawatch.

Back in 2011, he covered the Christchurch quake for Asahi Shimbun newspaper in Japan. He’s now deputy editor for international online outlet Buzzfeed in Japan.

"I respect what Google is doing for the journalism industry but if you search something you can find fake news and hoaxes on the top page of the search results. Google should first try to kick these out," he said.

The latest report on digital news from the Reuters Institute for the Study of Journalism suggested trust in news is falling faster in Malaysia than anywhere else in the region.

"We have cybertroopers who work for the government, weighing in on an unfavourable articles and making (online) comments and people trying to go against that. There is a proxy war going on," Malik Ali told Mediawatch. 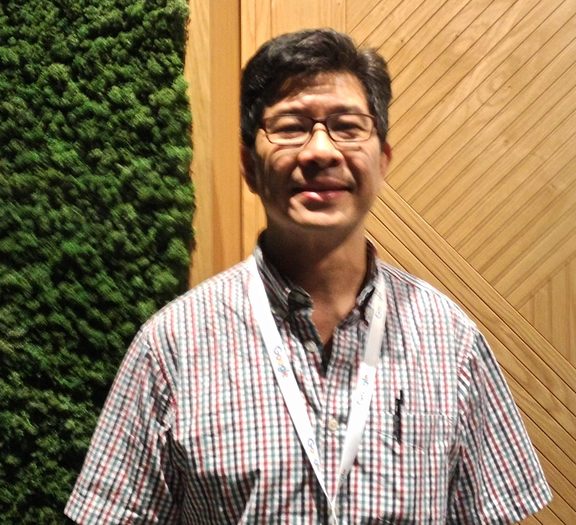 "On one side there's a fight for truth. Others benefit from confusion and smoke-screening and trying to influence people through social media, fake news, clickbaiting, and misinformation. As a consequence people do not trust the media. We're getting to the stage where we are asking: Is anything true?"

He was also concerned about the dominance of the big platforms in Malaysia.

"Ninety percent of digital advertising is going to Google and Facebook. Content creators are getting the short end of the stick," Ali said.

"It's a real issue. If you're looking for quality journalism without the dollars, it's tough. We need to look for business models that are palatable to content creators as well as the platforms," said Malik Ali.

"Whether they set out to be there or not, (Google and Facebook) are at the heart of the way information is distributed and journalism is shared," he told Mediawatch.

"If you end up with a public information marketplace that's poorer because journalism can't be sustained any more, then - if they are living up to the "do no evil" philosophy  - they should be thinking about all the sorts of ways they can help to sustain journalism," Morris said. 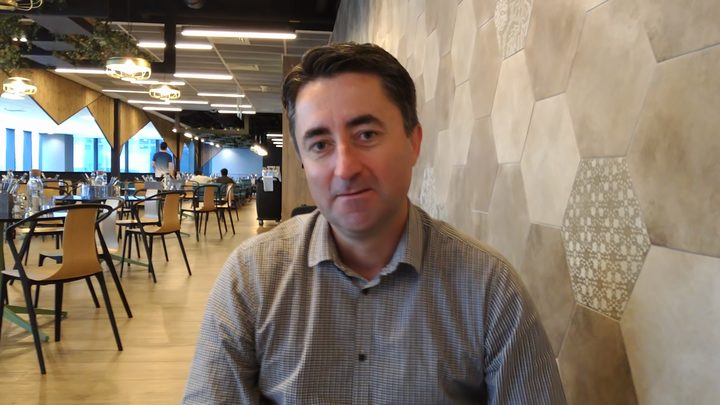 That has not yet translated into bank-rolling journalism and media companies directly, however.

"Misinformation did not start with the US election last year. It's been a pervasive problem for some time in Asia," she told Mediawatch.

"With all the ways people now share information - webpages, messenger apps, chat apps, social media - everyone is going to have to confront this," she said.

"News organsiations should be at the forefront of it because it's a chance to assert that they do have standards," she said.

Irene Jay Liu cut her teeth reporting local politics in New York State and Hong Kong’s top daily paper the South China Morning Post before joining Google at what has turned out to be a critical time for the media.

"There's never been a time when we had a greater need for authoritative voices that can provide high quality information. I'm glad that the News Lab can support journalists, and even volunteers, working on this," she said.

Stories verified by accredited organisations can now be tagged as such on Google news pages and search results.

But Google's main mission is simply to "make the world's information discoverable" and the company claims it is not a publisher or editor. So why is it Google's business if some of it is fake?

"We want to make sure the information people get in a search is what they want. Most people want information that is credible," Liu said.

"Through technology and partnerships (with media) we want to make sure the credible voices are elevated above the noise." 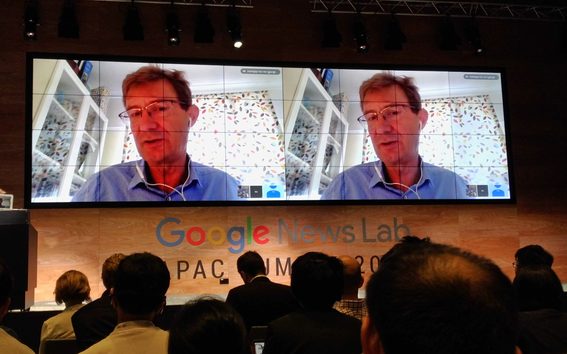 "We want to ensure that we build the future of journalism - a strong ecosystem," Google's Asia Pacific President Karim Temsamani told the Google News Lab journalism summit in July.

"It's important to us to build quality journalism so you can hold companies and institutions to account," he said.

Whether Google gets directly involved in backing the news media round the world will only be decided at the highest levels of the company. But if Google's profits continue to soar while news media incomes fall, the pressure on Google to act will grow too.

"However it’s done I think we will see some shifts in the next year or so. I think the platforms are going to have pay more - directly or indirectly," he said.

150 Asia Pacific journalists  - Including Mediawatch - attended the Google News Lab journalism summit in Singapore with the assistance of Google. There were no restrictions on reporting as a result of the arrangement.