$18 cabbages? An extra $75 for wine? Eye-watering claims about the crippling costs of charging for water floated free in the media this past week - even in the rural press which should have known better. 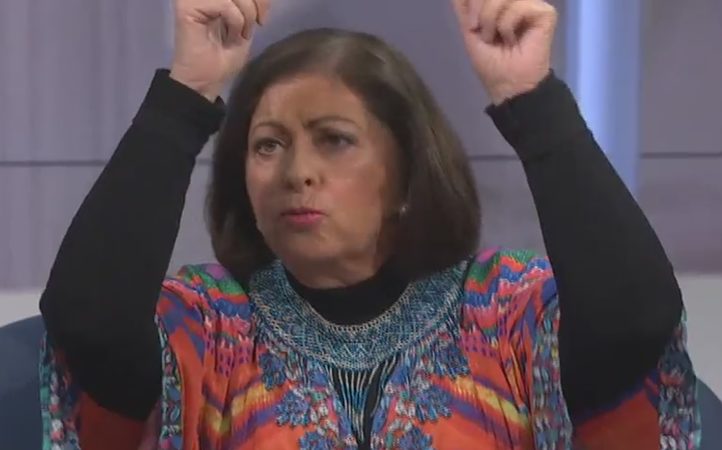 Michelle Boag on TVNZ's Q+A showing how high prices will rise if farmers are charged for water. Photo: PHOTO / screenshot

It was an awkward bit of radio.

To the strains of Katie Perry’s “I Kissed a Girl” on NZME’s rural radio show The Country, host Jamie McKay asked Labour leader Jacinda Ardern if she was flattered John Key thought that “the camera liked her”.

But then it was on to the serious business for rural listeners - the impact of Labour’s policy of charging for commercial use of water.

Jamie McKay asked her about reports of dramatic price hikes for cabbages.

It all started with a New Zealand First press release last week in which leader Winston Peters claimed the price of a cabbage could soar to $18.

“One large vegetable grower has estimated that a one cent tax per litre of water adds up to a 300% increase in supermarket prices,” said the statement.

Labour hadn’t actually suggested a levy of one cent per litre and there was no inkling of how the anonymous grower arrived at those sums. But it was widely reported nonetheless.

Environment Minister Nick Smith had earlier claimed water charges could wipe out the dairy sector, costing it $600 billion. That echoed Massey University lecturer James Lockhart who claimed in a statement farmers and growers would end up paying $500 billion to $600 billion - a sum greater than the annual national economic output.

The New Zealand Herald reported Primary Industries Minister Nathan Guy as saying a charge of 10 cents a litre would add $75 to a single bottle of wine. 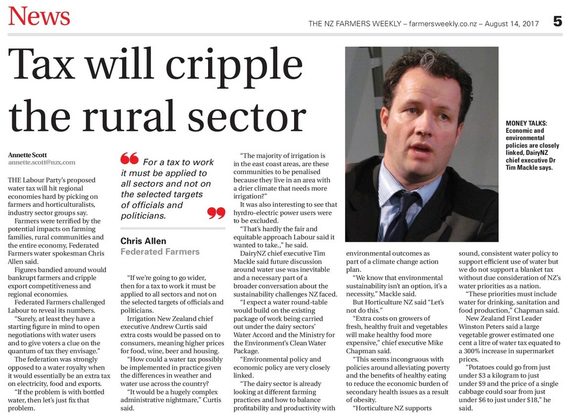 But when the Herald’s Isaac Davidson fact-checked that last Tuesday he found Mr Guy used a price previously proposed by the Green Party - but only for bottled, exported, spring water.

While he was at it, he analysed Finance Minister Steven Joyce’s claim that individual farms could face bills of between $50,000 and $100,000 a year for water under Labour. Only farms of more than 600ha could face extra water costs anywhere near the low end of Mr Joyce’s estimate, Isaac Davidson concluded.

Undetered, Deputy Prime Minister Paula Bennett told the Herald Labour should expect more talk about costly cabbages because they had not yet specified the precise rate of water charges.

"Those who have been around a little while know that in politics if you do not fill in the detail, others will do it for you," she told the Herald.

Not much of what politicians put into the void can be described as detail.

She discovered the show’s host Jack Tame had been doing his maths.

“David Parker said 2 cents per 1000 litres. Steven Joyce said it would cost dairy farmers at the lower end $50,000. If that is true, dairy farmers are putting on average 2.5 billion litres of water on their farms,” he said.

“If a water tax is introduced you can look forward to paying more for bread, vegetables, fruit, cereals and lamb and beef as well as dairy products"

But after a meeting with Labour on this, Andrew Curtis told Fairfax’s agribusiness writer Gerard Hutching:

"We had a good chat with them. The impact on fruit, veges, milk and bread will be minimal"

But milk, apples, potatoes, onions and carrots would go not up at all.

In Tuesday’s Dominion Post, social affairs editor Vernon Small described the various numbers being put forward as “nuts”, but said Labour had opened the door to this by not specifying the levy it would charge on irrigation water.

He said the royalty of 2 cents per 1000 litres Labour eventually put forward would add just 2 cents to the cost of producing a litre of milk and just 1.3c to a bottle of wine.

But even so, Vernon Small pointed out, those numbers all assume all the water needed would come from irrigation.

“It’s worth remembering that it does rain in Aotearoa,” he pointed out

Vernon Small’s debunking of the cabbage craziness was timely. A shame though that stuff.co.nz posted his story online with a picture of a cauliflower - not a cabbage.

Vernon Small wrote that floating a few facts should have “calmed the farm” on all this, but Farmers Weekly was not at all tranquil.

The cartoon in that edition of Farmers Weekly showed farmers converting cows to camels to keep their costs down - a nice bit of light relief perhaps.

But an article in this week’s edition began like this:

. . . in which case, not bandying about more figures most farmers must know were bogus and bloated would be the best approach surely.

That article wound up with Winston Peters claims of a colossal cabbage price rise and spuds soaring to $9 a kilo - all based that one unnamed grower in its press release the previous week. 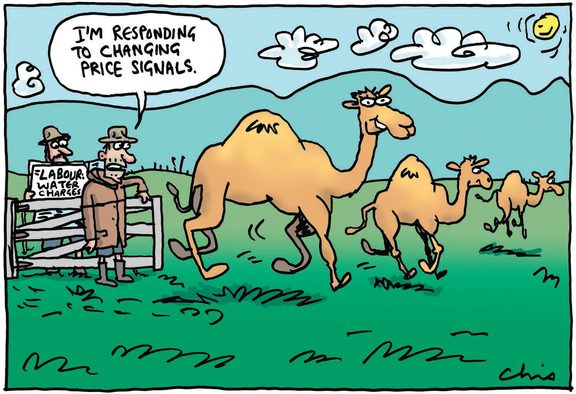 Farmers Weekly readers would probably be keen to know who that grower is, where they grow and how they did their sums. But - like other outlets - it didn’t go beyond cutting and pasting the party's claims.

Its editorial this week warned of “radical change in the ways farmers are allowed to use their land” no matter who wins the election.

"Most parties support some change to the way water is managed, allocated and used,” said the author Stephen Bell.

Questions do remain about the actual costs to farmers and whether Labour's levy income would really lift water quality around the country. The issue of whether charging might also mean more efficient use of irrigation water has barely been addressed in the media at all.

But given that Labour has had a policy of charging for water use for about three years, it shouldn’t have taken ten days to knock down wild and highly political claims of food becoming unaffordable.