Reporting the unreportable outburst from the Mooch

An abusive, career-ending tirade unleashed by Donald Trump’s former communications director recently was certainly newsworthy. But the media struggled to report the full fury of his outburst while also keeping it clean for the audience. 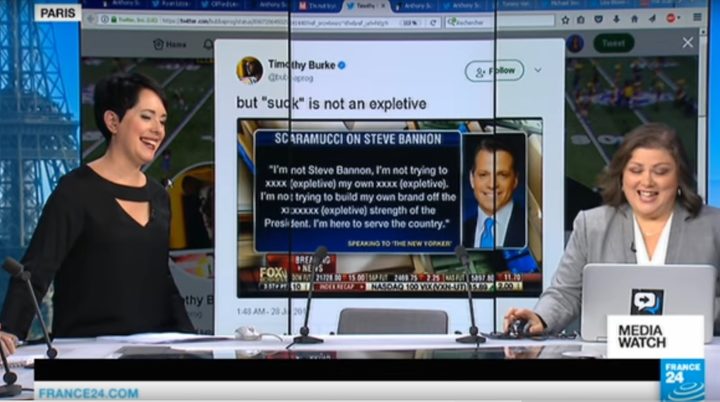 Anthony Scaramucci - aka The Mooch - was fired after just a week and a half at the White House shortly after a sweary rant at a reporter for The New Yorker magazine, which reported it in full.

The challenge for the rest of the media was how much of the Mooch’s filth and fury they could make public without causing offence, but still give an account that made sense.

A kind of trash-talk trifecta, in other words

It's a long way from 1979, when one US paper couldn’t bear to report in full an outburst by President Jimmy Carter.

He was overheard saying he could “whip the ass” of Senator Ted Kennedy in an election. The St. Petersburg Times resorted to strategic asterisks to spare readers' blushes.

The Mooch's spray was much more of a problem for broadcasters, who had to skirt around what Mr Scaramucci actually said about the other powerful people in the White House. Vice.com produced a handy one-minute montage showing just how much the likes of CNN and Fox News struggled with that.

Having heard that on Radio Live last weekend, Weekend Variety Wireless host Graeme Hill thought the self-censorship in the US was absurd.

Graeme’s guest on the Media Stick review segment Tamar Munch - who's also a publicist - wondered whether the unrepeatable language used by The Mooch was actually part of a cunning communications policy:

"To be so foul-mouthed that you can't be reported upon is genius," she said last weekend, with tongue in cheek.

"For the world of Trump, he's just the right guy," she said.

But Anthony Scaramucci proved to be the wrong guy for the President, who sacked him last Tuesday.

The Mooch is now mulch.