'Jacinda effect' in full effect in the media

The Ardern ascent set the news agenda this past week, even if it was in part due to unwanted questions about babies. How long will the media honeymoon last  - and how long will “new car smell” linger?  ​ 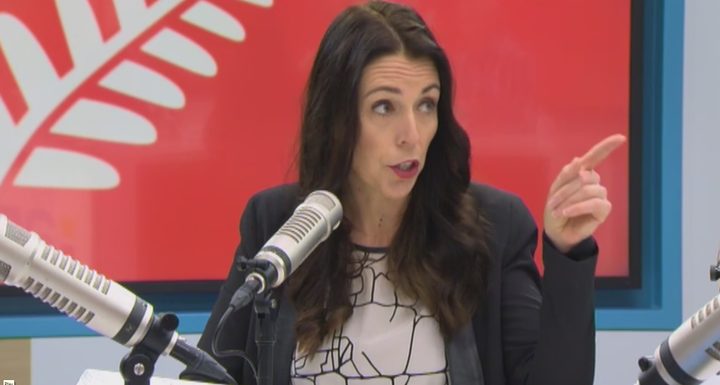 Jacinda Ardern confronts Mark Richardson on the AM Show. Photo: screenshot / AM Show

Andrew Little stepping down and Jacinda Ardern stepping up on Tuesday transformed the story of the upcoming election for the media.

“Many of the same outlets who had been tearing strips off Andrew Little and his party were suddenly gripped by Jacindamania,” the NBR digital editor Chris Keall noted.

“Within half an hour, Labour had got more positive coverage than it had in the past year with photos of its new leader splashed across home pages, and articles pulling bullet points from her first speech as leader,” he wrote.

The media was front of mind for the new leader too.

“This will not be a blancmange campaign,” Jacinda Ardern insisted in her first press conference - almost certainly a riposte to Newstalk ZB and TVNZ host Mike Hosking who had derided Labour as “blancmange veneer” on air the previous day.

Her press conference debut as leader went down well with political reporters and commentators who filed rapid reviews of it online - every one of them glowing.

“Labour supports the notion that you can’t polish a turd, but you can roll it in glitter. I don't think the electorate won’t buy it,” said host Rachel Smalley on Drive Time, reading a listener's text that summarised the scepticism.

On Monday's Newshub at 6, political editor Patrick Gower had said the polls were “a disaster for Labour”.

But under its new management on Tuesday, they were suddenly “an opportunity".

“The mood for change is strong,” he said. "She is well on her way to taking out Bill English."

Gower upgraded his assessment of Ms Ardern’s “vibe” from “good” to “serious” - serious enough even to trigger a Corbyn-style “youthquake,” he said.

That prompted National’s Gerry Brownlee to send him a package of pompoms addressed to "the Labour leader’s cheerleader-in-chief”.

Newshub' s Paddy Gower gets a "cheerleader in chief" parcel from Gerry Brownlee for his coverage of Jacinda Ardern. pic.twitter.com/mccO4pptJ7

On Morning Report the next day, Guyon Espiner asked National’s campaign manager Steven Joyce if that not just a joke - but a warning to media apparently under the influence of the 'Jacinda effect.' Mr Joyce denied that.

He also rejected Espiner's claim that Labour's new leader had what American politics pundits call “the new car smell”: the scent of something new that can excite voters.

Baby question puts a bump in the road

A question that wasn’t raised by the press pack in Parliament on Tuesday came up awkwardly on TV3’s show The Project later in the day.

Host Jesse Mulligan asked the 37-year-old leader if she would have to choose the job over having babies.

Ms Ardern said she didn’t mind him asking, as it was an issue she’d already raised herself as a MP.  Plenty of other people did mind.

In the guest’s chair on The Project that night - listening in but not joining in - was presenter Mark Richardson: the cranky contrarian on TV3’s AM Show.

When Ms Ardern turned up on his programme 12 hours later, he ripped the scab right off the issue.

When he said employers had a right to know if a prospective employee might drift off on maternity leave, he got a blunt finger-pointing response from Ms Ardern that can now been seen on the websites of most major international news organisations.

AM Show host Duncan Garner shut down the debate claiming “the horse has bolted on that one”.

But that particular horse had a long way yet to run.

I see @jacindaardern has already been asked about babies vs career. Please can every nob who asks that ask the same of Bill English?

"There are a lot of words that could be used to describe the hiring practice proposal made by TV hosts in the past 24 hours, but at the Commission we call it discrimination and illegal,” Human Rights Commissioner Dr Jackie Blue wrote on The Spinoff website.

Villainesse.co.nz asked the presenters an awkward question in return:

This got us thinking: have you two had vasectomies?

It’s a fair question. After all, you both implied that asking Ardern if she plans on having children was somehow relevant to her ability to do her job.

On the issue of whether it was fair or not to ask Ms Ardern the baby question, Mediawatch found just one opinion piece in which journalist said it was.

Heather McCarron - a radio reporter for Newshub in the Bay of Plenty - wrote this:

“As a sleep deprived, mummy-brained mother of a toddler and a six-month-old, the first question that sprang to mind when I heard Jacinda was taking over the Labour Party leadership was, "but hang on - doesn't she want babies?"

Plenty of other voters-to-be would also want to know if she was a mum-to-be, she reckoned, and that was a reasonable basis to ask the question, she said.

But it’s also her right to say “none of your business”.

And anyone who thinks they need to know the answer in order to cast a vote should think about what sort of society can’t accommodate a leader who wants to start a family.

How long on honeymoon?

As plenty of other journalists have said this week, Jacinda Ardern is enjoying “a political honeymoon.”

There's been plenty of positive exposure.

“She will get lots of media attention but that will stop because its only 40 days til advanced voting (begins) and the news media has to be fair and balanced. The honeymoon she's experiencing now won’t last,” said Massey University political marketing expert Prof Claire Robinson on Morning Report.

The precise length of her honeymoon might just depend upon how intoxicated we really are by the sight, sound and smell of Labour’s new car.