Murder mysteries on-demand are in demand

A new podcast about the Bain family murders has been a hit, following in the footsteps of popular ones about unsolved crimes overseas. Is it journalism - or entertainment? And why are we so keen on podcasts about old cold cases and true crimes?​

The logo for the Black Hands series. Photo: screenshot

Fairfax Media's core business in New Zealand is news. It publishes most of the country's major newspapers and the most-visited news website stuff.co.nz.

It was all set to release its first ever podcast series last Monday, after a bit of publicity in the Sunday Star Times and an online promotional ad.

But when the audio trailer for Black Hands went to the top of the iTunes podcast ranking all on its own, Fairfax released the entire 10-part series straight away last Sunday.

Black Hands is all about the killing of five members of the Bain family in Dunedin back in 1994. Hence the stark sub-heading: ‘A family mass-murder’. Almost everyone who's followed the news since then knows David Bain was first found guilty in one trial, but then acquitted after another one fifteen years later.

Martin Van Beynen, who covered the retrial for The Press in Christchurch, didn't join other journalists at the celebrations when David Bain walked free from the court that night. Instead he wrote a fierce opinion piece insisting the jury had got it wrong for The Press the following day.

Some would say any time is too soon for yet more analysis of murders that have been done to death in the media already.

Would people devote nearly six more hours to hear more from a journalist who had already made up his mind about who was responsible?

Turns out plenty have. Black Hands has been downloaded more than half a million times so far, according to Fairfax Media. 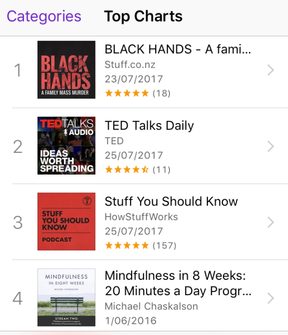 Black Hands at the top if the iTunes podcast chart. Photo: screenshot

That put it easily at the top of the podcast charts on Apple’s iTunes service in New Zealand. By Wednesday morning it was top of the iTunes chart in Australia too, displacing a murder mystery podcast produced by the ABC. It also reached the fringes of the top ten in the UK.

"We were blown away," said Kamala Hayman, the deputy editor of The Press who produced Black Hands.

"We had no idea if it would work or if the Stuff audience would pick it up," she told Mediawatch.

Listeners interest would have been piqued by Martin Van Beynen in the trailer saying: "I used to think David Bain was guilty..." and promising "startling new material".

Some of that was set out in newspaper features running in Fairfax papers this past week urging listeners to judge for themselves. 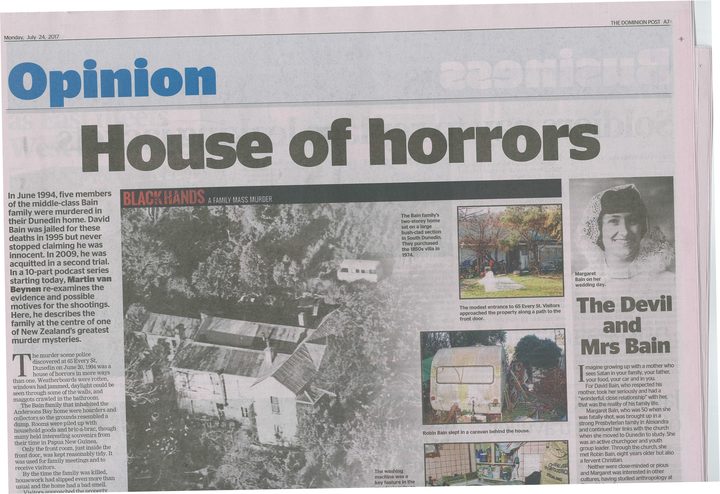 The Black Hands podcast was backed up with full page pieces about the Bain case by Martin van Beynen. Photo: photo / rnz

So did Martin Van Beynen change his mind about David Bain after going over all the evidence again for the series? If you’re working through the 10 episodes, or planning to, we won’t spoil that for you.

But does this 'whodunit' treatment in Black Hands make this investigative journalism - or entertainment?

"That's a story-telling technique. I don't think I can be blamed for that," Martin van Beynen told Mediawatch.

"I hope it is entertaining. There is some heavy material in there, but I didn't set out to entertain. I set out to inform. If people find it entertaining, that's great. But the research and the writing was definitely journalism. There's no doubt about that," he said.

The appetite for old cold cases

Stuff.co.nz didn't assume its readers would know how to get the podcast - or even what know what a podcast is.

Stuff was certainly right about the popularity of true crime as a topic. 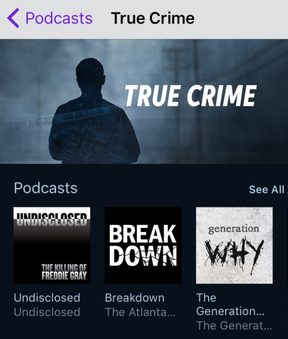 No shortage of murder mystery podcast from around the world Photo: PHOTO / RNZ Mediawatch

Fairfax Media brought podcasts into the newsroom in Australia last year in a series called Phoebe’s Fall, about the death of 24-year-old woman in 2010. Their rivals at The Australian newspaper had already put out a murder investigation podcast series called Bowraville.

The public broadcaster there - the ABC - has had a hit with The Trace which has just made headlines by revealing flaws in the case of a Melbourne woman who was murdered in 1980.

The story is strikingly similar to the BBC’s big hit podcast in the UK last year - Who Killed Sadie Frost - about an unsolved murder back in 1964. That followed the success of an independently produced and crowdfunded 10-episode series called Untold which explored the murder of a private investigator in London thirty years ago.

In the US, cold case podcasts have become an industry.

There's True Crime Garage, True Crime Brewery and if you like your murder podcasts a little edgier, UK podcast Slaughter glories in the slogan:

"Listening to Slaughter doesn't make you a psycho - killing people does."

There are now so many murder podcasts in the US that even with the array of homicides they have to choose from they look overseas for cases to chat about.

Even as far away as Every Street, Dunedin.

The Generation Why podcast from the US - in which buddies friends Aaron and Justin chat about unsolved murders - boasts 50 million downloads in five years, offers premium episodes and merchandise like hoodies, mugs, stickers and vacuum tumblers to keep your coffee hot. In 2014, Aaron and Justin devoted an episode to the Bain case. (For the record, they weren’t convinced by the defence case for David).

The series that inspired many other murder podcasts around the world is Serial, produced by the long-standing NPR radio show and podcast This American Life.

Series one of Serial probed the murder an 18-year-old student in Baltimore, Maryland, in 1999. Her ex-boyfriend Adnan Syed was found guilty, but last year his conviction was set aside after reconsideration of the revelations in the Serial podcast. A retrial could soon follow.

The 12 episodes and updates have now been downloaded over 100 million times.

When Black Hands was released this past week, The Spinoff website dubbed it: “New Zealand’s own Serial” but Kamala Hayman says they were not trying to replicate it.

"People who have listened to Black Hands have asked me what they should listen to next. I've told them to try Serial," she said.

Serial has ended up being a nice little earner in the US, but Black Hands cost Fairfax Media time and money.

“The journalism involved is very time-consuming and I’m sure everyone here will be thinking about whether we can afford to do these things in the future," Martin van Beynen told The Spinoff.

Fairfax Media will almost certainly seek public funding from New Zealand on Air for future podcasts from its media fund which now covers multi-media projects as well as broadcasting.

Will there be more series going over other New Zealand murders dogged by unanswered questions? Scott Watson, Scott Guy, anyone?

In a live q and a session on stuff.co.nz, Martin van Beynen told one reader that others are already in the pipeline, but Kamala Hayman told Mediawatch the next podcast cab off the Stuff rank won't be a crime series made in Christchurch.

"There are other podcasts in various stages of recording and planning, but they're not just crime ones," she told Mediawatch.

That's probably a good thing. Podcast fans with an appetite for murder yarns could probably benefit from a broader diet.